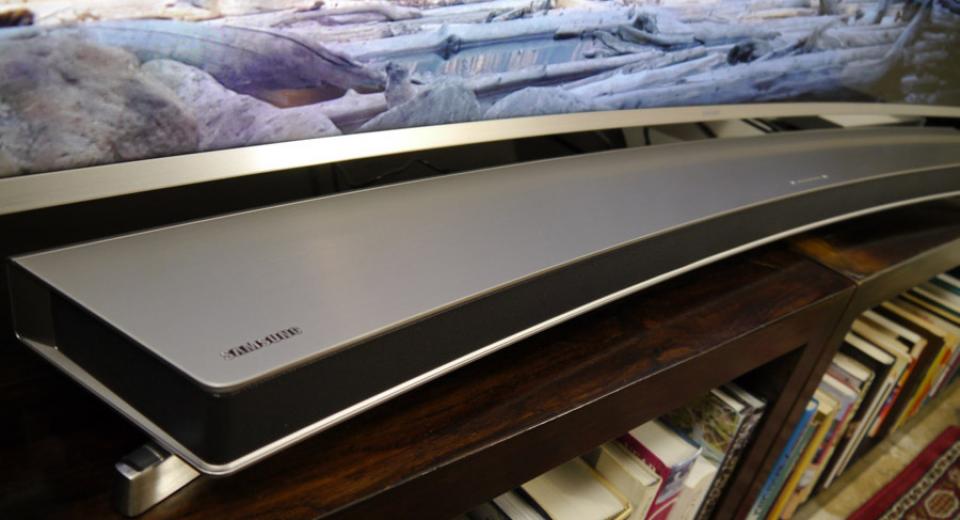 The HW-J7500 is Samsung's mid-range curved soundbar and sits just below the HW-J8500 that we reviewed recently. It uses an eight speaker configuration and comes with a wireless active subwoofer. The J7500 has been designed to compliment Samsung's latest curved Ultra HD 4K TVs and it's width means that it can be used with screen sizes up to 65 inches. The J7500 also comes with a remote control, includes HDMI input and output, supports Samsung's multi-room system and, at the time of writing (May 2015), it can be picked up for around £749.

In terms of its design, the HW-J7500 is almost identical to the HW-J8500, it's just a bit smaller which is probably a good thing. The J8500 was really too big for most TVs but the silver version of the J7500 would match the UE65JS9500 perfectly. In addition the HW-J7500 is also available in black and both versions have a brushed metal finish. The overall build quality remains very good and there are provided brackets for those who would rather wall mount their soundbar. The design is suitably sleek and at the top centre are raised buttons for power, volume and input select. There's a simple LED display that shows the selected input, the volume, sound modes, the surround sound mode and the subwoofer level - it also disappears when idle which is handy. The included wireless active subwoofer has a grey brushed metal design that matches the look of the main soundbar and can be positioned either horizontally or vertically with optional feet included for this purpose.
The J7500 boasts the attractive styling and decent build quality that we expect from Samsung.

All the connections are in a recessed area under the soundbar and here you'll find and an HDMI input and an HDMI output that supports ARC (Audio Return Channel). Whilst this might not sound like a lot of HDMI connections, it's an improvement on many soundbars that have none. There is also an optical digital input and a 3.5mm analogue mini-jack, along with a LAN socket for a wired connection as part of Samsung's multi-room system. There's also a USB port at the rear and built-in Bluetooth. The HW-J7500 comes with a handy remote control that is small, nicely designed and comfortable to hold. All the buttons you need to control the soundbar are on the remote including power, volume, mute and input select. There are also some basic buttons for controlling a connected device, as well as buttons for selecting the sound settings, the sound modes, turning the surround mode on or off, adjusting the subwoofer level and streaming music via Samsung's multi-room system.

Samsung provide plenty of features with the HW-J7500 including an array of eight speakers behind the black metallic grille and a total of 320W of power including the active subwoofer. The drivers are positioned with six along the front and one at either side to create a wider soundstage and a greater sense of immersion. The J7500 also uses separate amplification and active crossovers for each driver, which Samsung say can direct frequencies to the correct speaker with greater accuracy than passive crossovers. The included wireless active 7" ported bass reflex subwoofer uses Samsung's Multi-Air Gap technology which they claim can deliver deeper bass than a conventional subwoofer. The design also allows for the subwoofer to be installed vertically or horizontally, with optional feet provided for the latter configuration. The J7500 supports FLAC files up to 96kHz/24-bit but if you're listening to compressed material such as MP3, AAC and WMA, there's also High Frequency Audio Restoration to help improve the perceived playback. There's built-in decoding of the Dolby Digital 5.1 and 2-channel DTS lossy sound formats. The HW-J7500 also supports Samsung's multi-room system and although we weren't in a position to actually test this, we know how effective their approach is from our reviews of the M3 and M7 units. The system allows you to connect all the compatible units together via a central hub and thus seamlessly stream music to multiple devices around your home. The J7500 also includes a number of sound effects, as well as a pseudo surround mode that creates a greater sense of immersion and Clear Voice for greater vocal clarity.
There's plenty of features on the J7500, which is easy to setup and it's good to see HDMI included.

Despite including a number of features, the HW-J7500 is easy to setup and can either be positioned on a flat surface in front of the TV or it can be wall mounted using a provided bracket. The soundbar connects automatically with the wireless subwoofer when you turn it on but should you have any issues, you can pair the two units manually. The subwoofer can be installed vertically or horizontally and the are feet provided for the purpose. As always careful positioning of the subwoofer in your room will pay dividends and the fact that it's wireless certainly makes this process easier. Although there is also a subwoofer level control on the remote for better integrating the bass with the soundbar itself. If you want to try any of the sound modes you just toggle through them on the remote and also turn the surround mode on and off. Finally there are bass and treble controls if you feel the need to adjust the sound.

The J7500 becomes discoverable when you select the Bluetooth input mode, making it easy to pair with your smartphone or tablet and, if you have a Samsung TV, you can also connect wirelessly using TV Sound Connect. Alternatively you can connect to your TV via HDMI output, which means taking advantage of the ARC support, and you can connect an additional device using the HDMI input. Other devices can be connected via optical digital, USB and auxiliary analogue. There's a LAN port for a wired connection and built-in wireless capability, both of which can be used in conjunction with Samsung's multi-room system. To take advantage of this you'll need to buy one of Samsung's multiroom hubs but once setup you can stream music to multiple devices within the system and even run the soundbar as part of a wireless 4.1 setup. There's a free Samsung multiroom app that takes you through setup of the system and allows you to control all the connected devices in the system.

Samsung have been making some great sounding products for a few years now, as part of the Korean giants efforts to impact on audio in the same way that they dominate the TV market. Some of their previous soundbars have been quite successful, with the HW-F850 being particularly impressive. The move to a curved design obviously reflects Samsung's push to make curved screens the primary choice in the TV market and they launched their first matching sound bars last year with the HW-H7500. This year we've already reviewed the HW-J8500 which, whilst sounding good, was so big that it would probably limit the TVs that you could pair it with. Which meant getting the smaller HW-J7500 in for review made for an interesting comparison, especially as its width makes it ideal for the popular 50- to 65-inch screen sizes, but it's missing the J8500's middle speaker.

The J7500 might be slightly smaller than its larger brother but it could still deliver big, room-filling sound. In fact the Samsung was a very effective soundbar, creating a cohesive front soundstage that had good stereo separation but also retained the integrity of the centre channel despite the loss of the middle speaker. As a result dialogue always remained clear which is important as a lot of TV broadcasts are largely composed of talking. Of course if you're watching a drama or a film, then there is likely to be music and effects but this shouldn't worry the J7500. It actually handled music very well, making the soundbar a genuine option for those who want to listen to music streamed from their smart device or as part of a multiroom system. The J7500 had a well defined mid-range and could handle the higher frequencies without sounding sibilant.

The inclusion of a wireless active subwoofer also helped in this regard because no matter how big a soundbar is, and the HW-J7500 is quite large, the bass will always be limited unless there's a separate subwoofer. The model included with the J7500 isn't the greatest subwoofer we've ever tested, it was a little unsubtle and could have been faster in terms of its response, but as long as you're careful in terms of positioning and setup it can integrate quite well with the soundbar. Thanks to this sense of integration there was a solid foundation to the soundstage and everything from dialogue, to effects and music felt like it had greater presence. Overall the soundbar and subwoofer combination deliver a strong audio performance and the J7500 can also go loud without distorting or losing its focus.

We recently been using the opening sequence from Dawn of the Planet of the Apes as a test for numerous audio products. The scene is a masterclass in sound design with a complex mix that will test any system to the full. It begins on a close-up of Caesar and you can hear his breathing but as the camera slowly pulls back to reveal all the other apes, the mix opens up to include a choral arrangement and thunder. Then the apes startle some deer, the hunt begins and the audio explodes into life. The HW-J7500 obviously can't replicate the full surround nature of the mix but it does a great job of delivery the energy, excitement and detail, inherent within. The various sound modes can be a bit gimmicky and we never felt the need to use them, preferring the unadulterated sound produced in the Standard mode. However, engaging the surround sound mode can prove useful for making movies feel a bit more immersive.
The combination of the soundbar's design and the active subwoofer results in great sound quality.

As you would expect from a Samsung product the HW-J7500 is an attractively designed soundbar that is well made and offers plenty of features. The driver configuration provides an open front soundstage and a nice sense of immersion but also delivers dialogue clearly. The wireless active subwoofer isn't as subtle as some but it is flexible in terms of installation and integrates well with the soundbar. Overall the audio performance is very good, with a well defined mid-range, decent high frequencies and plenty of bass, resulting in an enjoyably detailed experience.

Well the obvious alternative is to go for a proper separate surround sound system and you can pick up a decent AV receiver and sub/sat speaker system for around £600 to £800. Alternatively you could go for an all-in-one package like Samsung's HT-J7500, which would obviously make a good match if you have a Samsung TV. However if you don't like the idea of building a separate system or don't want additional speakers around your living room, then a soundbar makes a great compromise and there are dozens to choose from. Samsung might want us to all own curved TVs but the reality is that most of us don't, so if you would prefer a more traditionally shaped soundbar then the Yamaha YSP-2500 offers a great performance at a similar price.