The soundbar that's all about sharing 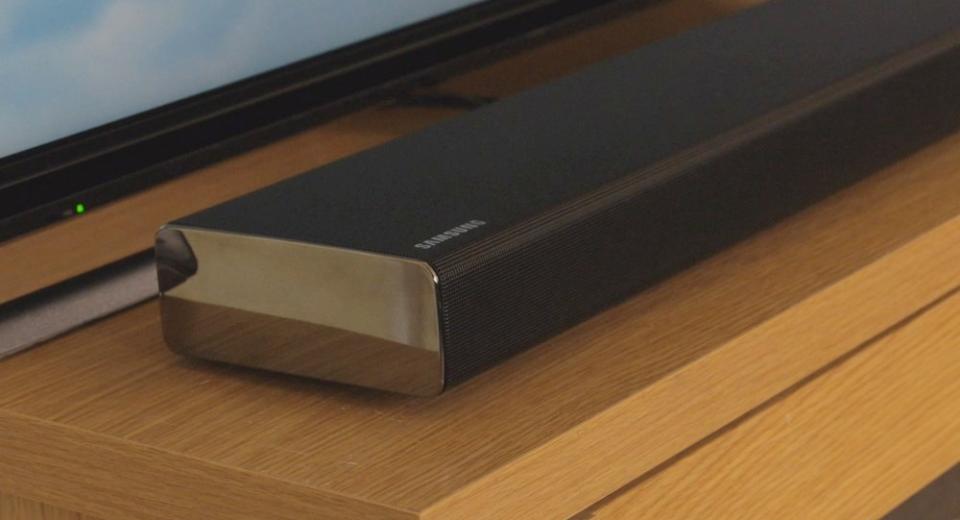 Soundbars? We have literally got them piled up and waiting for review at the moment.

It seems the trend for convenience ‘home cinema’ goes on unabashed and the HW-H750 is among Samsung’s third generation of soundbar products, with each year bringing with it incremental upgrades in performance and features.

On the face of it the H750 looks extremely similar to last year’s F750/F751, but it brings the advancement of being able to integrate with Samsung’s range of wireless and multi-room speakers, such as the M7, to form a more complete surround package.

Priced at around £600, the HW-H750 is certainly in a higher price bracket than the majority of soundbar packages we review but it does feature several refinements the mid and low end usually don’t. We’ll have to see if the likes of valve amplification, orientation led display panels and the aforementioned multi-room capabilities add to the more stock features to make it worth it but, most importantly, we just want the thing to sound great. The competition has never been more fierce so let’s take a look, and a listen, to see how the H750 takes it on.

The first thing to get out of the way is that the main speaker bar is very low profile so you should have no difficulties in slotting it under your telly with its height of around 5cm but, of course, it can also be wall-mounted. Cunningly, Samsung has equipped the soundbar with a display panel on two faces of the mesh-covered speaker bar and the appropriate one will illuminate, dependent on how the soundbar is mounted.

We really like the unobtrusive design and the fact the speaker bar is angled up slightly, by means of moulded feet on the bottom, should help with sound projection. Besides the display(s), the only other area of visual distinction comes with a little window that allows you to see the valve amps in action. They glow orange and the Perspex window becomes quite hot after a time but it’s still a nice little talking point. The subwoofer is somewhat more stand-out and presents a footprint of 305 x 401 x 305mm (WxHxD) for you to accommodate but since it communicates wirelessly with the main unit, you shouldn’t have too much of an issue finding a spot in your room. Naturally, it does require its own power source and if it ever loses the lock from the main unit, there’s a reset button at the back. The sub is ported at the rear and the driver has been increased in size over last year’s model to a decent 7-inch diameter.

Connectivity options are reasonably plentiful with one HDMI in and one HDMI out for ARC (Audio Return Channel) operability, plus you also get a S/PDIF digital audio and a LAN port for the multi-room feature and all the connections are placed in small recess at the back or bottom of the main speaker bar – depending on orientation. You are also provided with a USB port, for MP3 players, and a 3.5mm auxiliary jack for just about everything else you could think of. Additionally, there is also the option of Bluetooth streaming from mobiles and PC, as well as the same, under the name SoundShare, from compatible Samsung Smart TVs (6 Series and up).

A low-slung design means it won't obstruct the telly

The remote has undergone a welcome redesign and is now finished in the same black mesh pattern as the speaker bar. It has all the expected volume controls, an independent one for the subwoofer plus separate Treble and Bass controls for the overall output. You also get a dimmer control for the display, a source input selector and a Sound Effect button which toggles you through the various options. Alternatively, you could always use Samsung’s multiroom app (Android & iOS) to control it, which is particularly handy when all you want to do is stream music from your phone.

The HW-H750 just happened to be here at the same time as the excellent Ultra HD HU7500 which, remarkably, gave us our first chance to check out SoundShare in action. Given the number of Samsung TVs and soundbars we’ve reviewed, it’s almost unbelievable that the coincidence hasn’t happened before but it was worth the wait, as it’s seamless. Even when using products from the same brand the vagaries of ARC and HDMI CEC implementation mean you get issues, but the proprietary tech ensures instantaneous connection, zero lip-sync issues and reliable mutual, powering on and off. The inclusion of valve amplification hasn’t been such a marketing emphasis for Samsung as it was with last year’s models but it still promises to deliver a ‘warm, rich and realistic sound’ although we didn’t feel it added all that much last time around. Certainly some soundbars present a more fatiguing listen than others so it will be interesting to see what tweaks Samsung has made for 2014. In order to fulfil its ‘surround sound’ processing, the HW-H750 can decode multi-channel Dolby Digital and DTS as well as having compatibility for streamed AAC, MP3, WAV, AALC, WMA, OGG and FLAC files.

It seems as though Samsung has tuned this soundbar package slightly differently to last year and the results are a somewhat smoother sound, not that it was sibilant in the first place. Whether it appeals to you, or not, will be a matter of personal taste but it could certainly never be described as offensive. If anything, some may find it a tad toothless but that will only be when listening at moderate to low levels. The H750 needs opening up quite a bit for you to get the most from it but isn’t that one of the points of ‘home cinema’? You want it to be something of an event.

With typical volume levels set anything around or above the 20 mark, this package really starts coming into its own, thanks in large part to a subwoofer that ranks above most we get sent with a soundbar package. It’s not all thud and thunder, either, although it can do that stuff, it’s more like a reassuring presence to prop up the rest and Samsung has set crossovers such that sound-mixes feel beautifully rounded with transitions near seamless. Gravity has quickly become a favourite test disk for soundbars claiming any surround processing credentials. For the record, the HW-H750 has 5 listening modes – Standard (passthrough), Cinema, Sports, Voice & Music – plus you can apply ‘surround’ processing to each. There’s no doubt this DSP is technologically impressive and, indeed, the Sports mode can be effective in localising crowd noises but we largely ignored them in favour of ‘Standard’. Yes, using Surround with multi-channel movie and TV audio tracks did raise the verticality of projection to impress levels but, returning to Gravity, the opening scenes sounded quite a bit more sibilant with it on, and thus would tire your poor lugholes that bit faster.

We would certainly encourage any owners reading to experiment but, for us, Standard was definitely all we ever really wanted and low-level listening concerns aside, the H750 left is very impressed. The added smoothness might just take the odd edge off when you might not want it to but two channel music listening was definitely more rewarding than last year’s equivalent and the extra girth of the bass driver lends a tad more impact in all the right places. We also felt that, despite the lack of true surround, the H750 did a great job of localising effects and dialogue was generally very clear within the mix, even when the action was really hotting up.

Do you know what, if you were to walk in to the likes of your local John Lewis and were to see the HW-H750 in action with one of the Samsung TVs blessed with SoundShare you couldn’t fail to be impressed. It’s a lovely looking package that connects and blends seamlessly and sounds pretty damn good too.

The star of the show is an assured subwoofer that underpins the mid-range and tweeter drivers to absolutely great effect. Not that the rest of the package is really lacking for anything. You get all the connections you’re likely to need, especially if your TV is ARC capable, the low slung profile means it will comfortably fit under your TV and there’s high quality streaming support for your Bluetooth enabled device.

The general audio performance was also really good, both for video based and music duties. The tuning might be a little on the smooth side, for some, but this leaves the H750 as a very easy, non-fatiguing listen that is highly unlikely to offend anyone. The H750 will also integrate with Samsung’s new range of multi-room speakers to form a ‘proper’ surround set up, which is quite a compelling prospect.

Ultimately, there is very little to fault the HW-H750 on, but is it £600 worth of audio product considered as a standalone product? We’ll leave those kind of value judgements to you but there are similarly performing soundbar packages – bells and whistles not necessarily included – that can be picked up for a bit less. On the other hand, if you’re about to buy into the SoundShare and/or new Multi-room ecosystems, the HW-H750 will make for an excellent acquisition.