It's not a soundbase, it's a SoundStand! 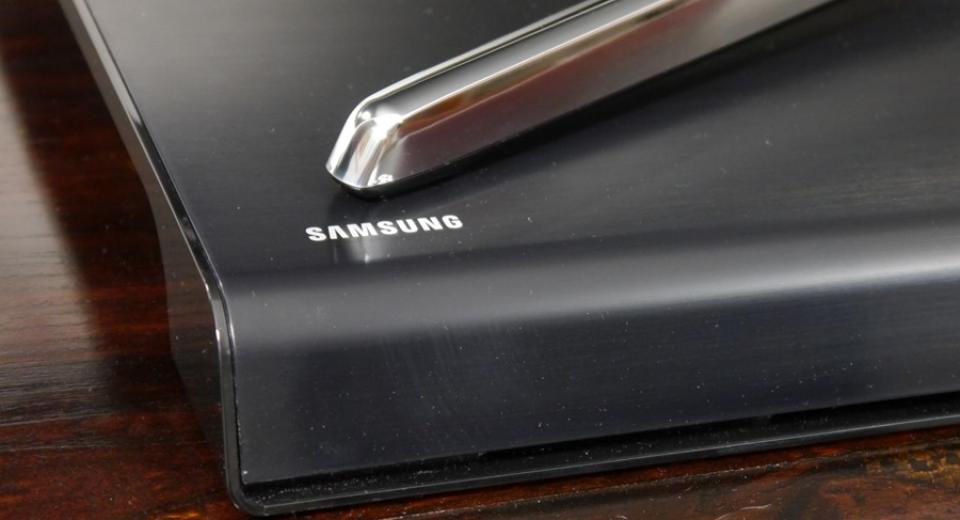 The soundbar market has already become quite mature, so much so that now manufacturers are looking at ways to put a spin on it.

This has led to the development of the soundbase, which essentially acts in a similar way to a soundbar but sits beneath your TV. The appeal is obvious, a soundbase or soundplate as some manufacturers prefer to call it, is less intrusive and won't block your TV's screen or IR receiver. It also takes up less space, essentially filling the same footprint as your TV and provides more space for things like subwoofers. Most of the major players have joined this burgeoning market and some manufactures have even gone further, like Focal's Dimension soundbar and soundbase combination.
Samsung have been busy releasing a number of excellent soundbars over the last few years and their HW-H550 impressed when we reviewed it recently. Now it's time for the Korean giant to jump on the soundbase band wagon with the release of their new HW-H600 SoundStand. This soundbase uses a low-profile design that can apparently handle TVs from 32 to 60 inches. The H600 also includes Bluetooth, HDMI inputs and outputs and Samsung's TV SoundConnect. Not bad for around £259 (in August 2014), so let's see how Samsung's first foray into this market performs.

Design and Connections of the H600

The HW-H600 uses a low-profile design that can sit comfortably under your TV without drawing attention to itself. That's not to suggest that the H600 is plain, just that it's intended to be minimalist and understated. The H600 has obviously been designed to compliment Samsung TVs primarily but its black brushed metal finish means that it will go well with just about any TV on the market. The H600 has been design to handle TVs with screen sizes ranging from 32 to 60 inches and a maximum weight of 77lbs. We were using it in conjunction with a 48 inch Samsung H6500 and the TV sat very comfortably on the H600. The H600 measures 735mm wide by 360mm deep and 37mm high, with a weight of 5.0kg. The Samsung uses a separate power supply that connects to it via DC 14V connection at the rear. The front of H600 is angled to direct sound at the listener, thus reducing reflections from the ground and improving the sound quality. The sound is also multidirectional with two speakers firing at the front and two at the sides. There are also two subwoofers built in to give the H600 greater low frequency presence and overall the build quality is reasonably good for the price point, with a suitably solid feel. At the rear of the H600 are the connections that sit within a recessed area. This makes for good cable management but the connections can be difficult to see when peering around a TV, so you might want to connect up the H600 before putting the TV on top. You get an HDMI input and an HDMI output that supports ARC (Audio Return Channel) and whilst the H600 can pass 3D it doesn't support 4K. There's also a USB port, an optical digital input and an Aux In for analogue audio. The provided remote control is small but includes all the controls you need and is easy to use.
The low-profile styling of the H600 makes it unobtrusive without looking plain.

The H600 also supports Samsung's TV SoundConnect, so if you have a compatible Samsung TV you can connect the two via Bluetooth. This approach minimises the number of connecting wires and you can easily control the H600 and your TV from a single remote. You can also simultaneously turn on and manage the volume of your TV and H600 with Bluetooth or HDMI connectivity. Finally in terms of wireless connection, the H600 also includes NFC (Near Field Communication) for quick and easy connection to a supporting smart device.

The H600 can decode Dolby Digital and DTS and also has extensive file support including AAC, WAV, WMA, MP3, OGG and FLAC. The H600 includes Samsung's Crystal Amplifier Plus and a 4.2 speaker configuration that uses separate amplifiers to process high, mid and low frequencies. There are also four Sound Modes and Surround Sound Expansion that expands the optimal listening area and elevates the height of the sound to the level of the TV screen.

The H600 proved to be very adept as an alternative audio source and will certainly be preferable to the built-in speakers on many TVs. We were using the H600 in conjunction with Samsung's UE48H6500 and although the built-in audio wasn't bad, the SoundStand was clearly superior. It sat comfortably under the TV and looked attractive without drawing attention to itself. The connections were minimal and we tried the H600 with HDMI, optical digital, Bluetooth and TV SoundConnect.

Regardless of the connection we chose, the audio was open with a wide front sound stage. The use of drivers at the side definitely helped to create a greater sense of immersion, although any system with genuine rear speakers will obviously be superior. Where the H600 proved very effective was in terms of regular TV programmes, with dialogue delivered in a clear and focused manner.

The slight angle to the speakers worked well in our setup, firing sound directly at the listener. This meant that music and effects were also well rendered and the separate amplification for higher and lower frequencies also paid dividends with a nicely rounded sound. The mid-range was good and the higher frequencies never sounded tinny. The bass was reasonable but lacked the impact you would get with any system that has a dedicated subwoofer such as Samsung's own HW-H550.

We tried the H600 with a number of different sources and it proved quite capable, delivering an enjoyable overall sound. It could also go very loud without distorting, making it well suited to any living room, even quite a large one. We watched a lot of TV programming where the H600 performed commendably and with movies such as Olympus Has Fallen, it managed to convey all the explosions and gunfire effectively whilst still anchoring the dialogue to the screen.

A dinner party gave cause to press the H600 into providing background music and in this respect it proved equally as impressive. We're not saying that the H600 can outperform a proper stereo setup but given its limitations, the Samsung handled music surprisingly well. Listening to Yakar by Amadou Diagne revealed the close mic'd vocals, drums and acoustic guitars with genuine detail. Whilst Bernard Bultler's superb guitar work on Ben Watt's Hendra was equally as effective.

The H600 handled both TV and Movies well and proved surprisingly adept at music.

As a first attempt at a soundbase the Samsung HW-H600 SoundStand is a good effort, delivering a clever combination of classy looks and subtle design that helps it sit unobtrusively under your TV. There are a decent set of connections at the rear and a handy remote, whilst the addition of Bluetooth makes the H600 more flexible in terms of wireless connection. It also adds both NFC and Samsung's TV SoundConnect to the party and there are four different sound modes for those that like that kind of thing.

The H600 proved very capable in terms of its audio performance, with a wide and open soundstage and a nice sense of envelopment. Dialogue remained clear but music and effects were also well rendered. The H600 could go loud without distorting and both the mid-range and high frequencies were well served. The low-end could have been better but wasn't bad considering the H600 lacks a separate subwoofer. The Samsing also proved surprising adept with music and it supports a decent number of file types.

The growing soundbase market is competitive and we've already seen a strong contender from old rival LG with their LAP340, although this is more expensive. Certainly in terms of design, features, performance and price, the Samsung HW-H600 SoundStand makes for a very tempting possibility and deserves to be on any short list.