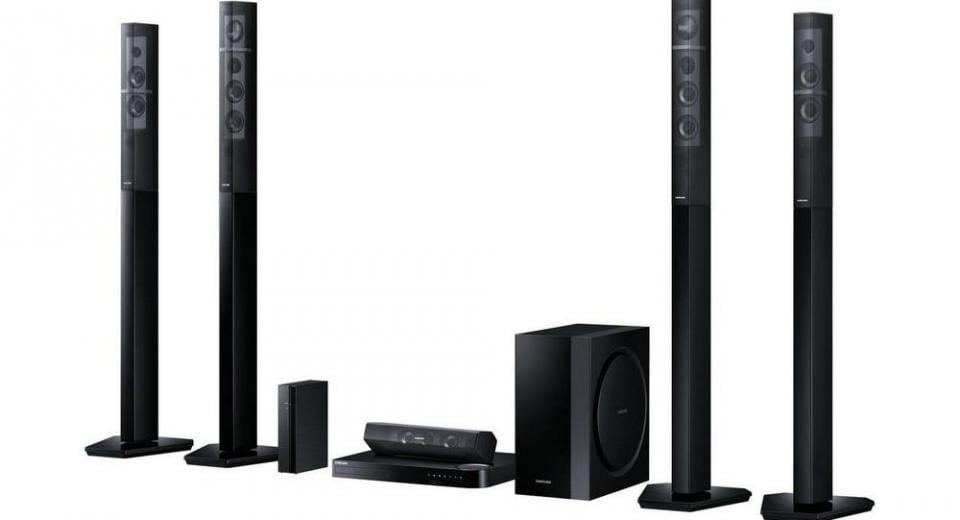 This is a complete package that will allow you to enjoy a 7.1 channel surround sound experience in the home, playback all your DVDs and Blu-rays, as well as including a selection of cutting-edge Smart TV and streaming features in to the bargain. At the time of publishing (March 2015), this product is so new that it’s only available to pre-order with an asking price of £799.99.

What’s in the box?

Bar a TV, everything you will need is in there, including the main unit which has the disc player, processing and amplification and disc playing electronics within. There are also 6 speaker units – four surround, a centre speaker and a subwoofer – with all the wiring necessary to plumb them in It’s probably worth noting that the surround speakers are of the ‘tall-boy’ type, meaning you’ll need to factor in the footprint of the stands when considering placement. In the average room, that’s probably more of a consideration, in terms of the rears, but those interact with a wireless unit to minimise the number of speaker cables you’ll have to trail around. Additionally, there are power cords, an instruction booklet and a remote control also in the package.

The idea of these systems is that they are the easiest possible multi-channel solution for the end user so set up is made relatively simple. All the speaker plugs and wires are colour coded so it’s easy to see what goes where at the back of the unit. It’s worth taking the time to set up your speaker distances in the Sound menu or you could opt for Samsung’s new auto set-up, consisting of a series of tones it asks you to respond to but we found the manual process more accurate. The system is designed with high definition video in mind, so your sole option for connection to a display is from the HDMI output. In a perfect world, this will be to an ARC (Audio Return Channel) capable HDMI port but don't sweat if your TV doesn’t have one (most recent ones do), as it will all still work. In the instance where none of your TV’s HDMI inputs have ARC, you’ll be best served using its digital optical output (toslink) inserted in to the corresponding input on the HT-J7750. As a last resort, there are also stereo RCA inputs on the rear but that’s two channel only, of course. There are also 2 HDMI inputs for the likes of your set-top-box or games console, which will be enough inputs for most, given the fact there is a Blu-ray player built-in. Finally, beneath a flap on the front panel, is a USB port which can be used to playback media files from MP3 players/storage devices. A wireless unit cuts down the trailing wires

There’s a nice looking little remote bundled with the system, but we think the navigation buttons should be more standout. It possesses the all the volume and playback buttons one would expect and a shortcut to the home screen. There are also some touch-sensitive buttons on the facia that offer some simple controls. There’s no doubt the system is easier to use if your TV is ARC capable but it’s still simple enough if you’re not; it’s just a case of selecting the appropriate input using the source selection button on the remote. When you want to watch a Blu-ray or DVD, it’s as easy as popping in the disc and it will auto-play and accessing the Smart TV features is just a matter of pressing the Home button. This being such an early sample, the full gamut of apps and services wasn’t yet present but when it’s on wider release, we’re assured you’ll get all the expected services, including BBC iPlayer, 40D, ITV Player, Demand 5, Netflix, YouTube, Wuaki and Amazon Instant. You should also get social networking apps via Facebook and Twitter but we could still stream our media files from PC, phone or tablet using DLNA, screen mirroring, WiFi direct and Bluetooth. We’ll update the review, and indeed provide a dedicated piece on the Samsung apps when they’re all finalised for 2015.

As with any Blu-ray player worthy of the name, the J7750 adds no uncalled for processing nor taints the colours in any way shape or form, provided its left at the default settings. Movies shot at 24p (which make up the vast majority) are handled flawlessly but even those rare1080i60 discs provide beautiful images, thanks to excellent deinterlacing capabilities. The HT-H7500 can even restore the original framerate of some DVDs not encoded at 24p, which is a bonus for movie buffs. The 3D performance of this player is also first rate, with the same preservation of the original source we saw with the 2D output.

We’re currently between 4K TVs so we didn’t get chance to test out the headlining, UHD scaling feature but based on past evidence, we have no reason to suspect it will be anything other than excellent. Certainly, the processing engine does a great job with sub Full HD resolutions, so if you are still harbouring any much loved DVDs, you can rest assured that the J7750WM will treat them with due reverence. So, pretty much as ever, Samsung has produced another product capable of superb video replay in the HT-J7750.

There are no absolutes here as different discs have varying load speeds, depending on the content contained upon them but we will say the J7750 is unlikely to frustrate in this department. Most Blu-rays were ready to go somewhere in the 20-30 seconds range while DVDs typically shaved another 5 seconds from those speeds. There’s also a ‘Quick Start’ option in the Setup menus which doesn’t do anything for discs loading times but it does improve the boot up time, albeit at the expense of slightly increased power consumption in standby

Given that the speakers all come from the same stable, it’s no surprise that they are extremely well matched, tonally speaking. This really helps spread the soundstage convincingly, with multi-channel movie soundtracks filling the room atmospherically. There are various sound processing modes you can invoke, via either the Sound Effect or 3D Sound buttons on the remote but we never felt the need to do so. The combination of well-matched centre and surrounds, with a subwoofer that certainly hits enough of the low frequency effects to make your carpet wobble should be enough for most.

The 3D Sound mode is an AKA for DTS NEO Fusion II processing, which is a joint development between Samsung & DTS and intended to provide a pseudo 7.1 experience but, quite honestly, we found engaging it made the surrounds too powerful and the general audio quality lacking the distinction of the untouched mode – especially with something like Gravity, which has a very enveloping mix to begin with. Better suited to movies than music
Samsung doesn’t really push their Vacuum tube amp technology as heavily as they once did, which is good, as we don’t really think it has any great bearing on the final output. That said, last year’s move to a more mellow and warmer sound is maintained, which suits me personally, although I did find the J7750WM a slightly fatiguing experience for extended music listening. There’s plenty of get up and go there and in straight two channel mode, it’s a fairly inoffensive listen but it’s not exactly what we’d call inspiring and the sub shows its limitations when turned to musical duties. It sounds a little slow and sluggish with complex bass arrangements and it’s probably better just to disengage for music. There is built-in scaling for ‘MP3 level sound’ (24KHz/8 bit) to make it closer to CD quality (44.1KHz/16 Bit) and it is pretty effective so it’s a decent solution for those that like to stream their music from the likes of Spotify but we’re still pegging this one as something for background, rather than serious, listening.

Samsung probably won’t thank us for saying this but we’d be inclined to hang fire. At its current pricing of nearly £800, it certainly isn’t inexpensive and the chances are there will be reasonably significant price-cuts during the product lifespan. Still, for its combination of ease-of-use, connectivity, excellent picture quality and convincing surround sound delivery it still merits an AVForums Recommended Award.


What alternatives should I consider?

With the general market shift toward soundbars and sound-bases within the industry, you’re not exactly spoilt for choice in the home theatre in a box category anymore but at the time of publishing, you can still pick up last year’s HT-H7500 which provides most of what the J7750 does at a significantly lower price-tag. It doesn’t have the tall-boy speakers, so you might have to factor in some stands, but some will definitely see that as an advantage. Alternatively, you might want to look at the LG BH9540, which provides a further two height channels, comparable smart features and picture quality for approximately £100 less than the product reviewed here.