One of the best buys of the year! 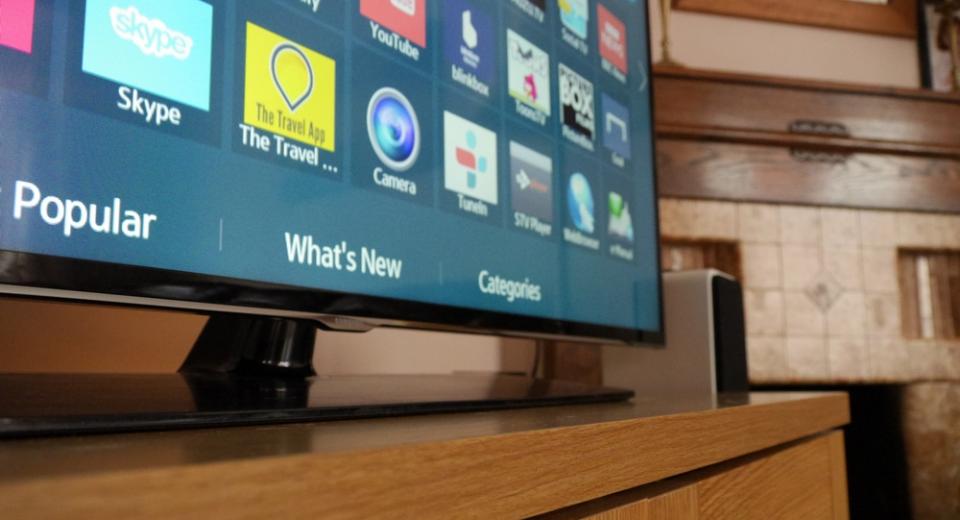 Well, it’s the first five series Samsung we’ve seen in 2014 as the manufacturers are understandably keener for their upper tier ranges to receive more publicity. This is a Full HD TV that comes in a variety of screen sizes – UE32H5500, UE40H5500 & UE48H5500 – and it’s the 48-inch model we’re looking at here. The 48-inch H5500 has a suggested retail price around £850 but you can pick it up for less than £530, at the time of publishing (October 2014). Despite its fairly low status, the H5500 is still a television packed with Smart TV features powered by quad-core processing and if it can get anywhere near matching the picture quality of something like the H6400, we will have a bit of a bargain on our hands.

Truth be told, it’s not much of a looker but then many will like the unobtrusive plain black design with its ultra-slim bezel. It’s not the slimmest of LED TVs, either, and with a maximum depth around 6.5cm it’s not going to make for the sleekest wall-mount install but the fact it has direct LED backlighting – rather than edge mounted – is potentially very good news on the picture quality front. We were a bit disappointed that the (relatively wide) black base stand doesn’t allow for swivel positioning but it is very light so it’s easy enough to shuffle around on your AV rack.

There are a good set of connections around the sides and back of the UE48H5500. Those include 3 HDMI ports – two at the side, one pointing out of the rear – legacy Scart, Component and Composite video inputs and a couple of USB ports. There’s also a headphone jack and a S/PDIF digital audio out for connection to a sound system or AV receiver. The H5500 also features both a LAN port and built-in WiFi, should you not be locating the TV near to your internet connection. A solid set of inputs & outputs

This is the first time we’ve handled, what we’d consider to be, a conventionally sized TV remote from Samsung in 2014. The reason for this is there's no Smart Touch control remote provided, as per their other recent TVs we’ve reviewed. We never thought we’d catch ourselves saying this but we do miss the excellent voice command interface of the smart controller, although there is absolutely nothing wrong with the provided handset. The buttons are quite large and easy to reach, with sensible locations so that the most used are toward the centre, and an indent on the rear means it’s easy to use one-handed. Considering this is an entry level Smart TV, the H5500 is hardly lacking in apps – in fact it’s teeming with them! As well as all the usual video streaming suspects (YouTube, Netflix etc), the Samsung Smart TV platform gives you access to all the major UK catch-up services – iPlayer, 4OD, Demand & ITV Player and there are dozens of other video apps available too. You also get screen mirroring, a reasonably effective web browser, a mobile app, the potential for Skype video calls (accessory camera needed) and a content recommendation system thrown in. In fact, there’s so much ground to cover we dedicated an entire review to the subject, so take a look if Smart TV services are your thing. There's no skimping on the features front

The out-of-the-box movie mode was pretty impressive for a low-ish end TV. There was a general excess of green energy in the greyscale and the Contrast control was set too high for the panel's capabilities, causing noticeable clipping of red but delta Errors were generally in the tolerable range. The colour performance was about as good but there were several saturation errors probably beyond fixing, given the lack of a colour management system. Also, as the colours varied between being either too bright, or too dim, there’s not much that could be done with the global colour decoding control either. By ways of detailed calibration controls, there’s ‘only’ a two-point white balance option within the menus of the H5500 but that doesn’t really matter when you can achieve results as per below. It took just a matter of minutes to reduce greyscale errors to well under the perceivable limits and gamma also tracked very close to where we wanted. As stated above, there wasn’t a lot we could do with the colours but since the greyscale calibration helped bring all colour errors to under 3, it’s not something that’s a cause for concern. Not that we can imagine many owners will go to the trouble of having their H5500 professionally calibrated! A good one for the gamers out there

The 48H5500 is a great choice for gamers, although Samsung doesn’t make it easy for them. To achieve the lowest possible input lag figure, it necessitates the editing of one of the HDMI source inputs to be renamed as PC. To do that, you click on the ‘Source’ button of the remote, navigate to your desired console or PC HDMI input and then when you hit the ‘Tools’ button, you can change the labelling to ‘PC’. With that done, we recorded input latency of 27.9 milliseconds, which will be sufficient for all but the most demanding thumb-twiddler.

The H5500 is blessed with pretty deep black levels and resultantly pleasing contrast performance. We measured an average black level of 0.049 cd/m2 against a peak white of 109cd/m2 from a chequerboard pattern, producing a contrast ratio of about 2225:1 which is certainly impressive when compared to many TVs out there. As a result, images were blessed with plenty of pop and depth and the fact that dark screen uniformity was really good definitely helped.

As we can see from the test results above, colour accuracy was also very impressive, which certainly helped to bring out all the detail in images as well as providing them with a very natural look. There’s an inherent sharpness to the H5500 owing to the panel structure, too, that many will really like and it certainly helps drag out every last element of high definition images. That said, thanks to very a competent scaling engine, standard definition images were handled sympathetically too and the H5500 has no issues with all the most relevant film cadences, so it’s a good choice for movie lovers.

Puts many a high-end TV to shame
The motion handling of the UE48H5500 was about what we’d expect from an LCD panel, meaning you might spot the odd bit of blur on fast panning action but it’s never unseemly and some might find the ‘LED Clear Motion’ control, in the ‘Picture Options’ submenu, of benefit here. This technique inserts black frames into content so the picture will dim some although we don’t find it particularly effective but it’s definitely something that's worth checking out as our eyes and perceptions all differ. The stuttering effect we sometimes see in higher-end Samsung TVs (6 Series and above) was thankfully totally absent in the H5500 so that’s another point in its favour.


You'll be hard pressed to find a more competent TV in this price category and there was little to nothing in the way of faults or distractions. Viewing angles aren’t especially generous, however, so anyone sitting 30-40 degrees off-axis from the centre of the screen won’t be seeing the same contrast-rich images as those more centrally positioned. We also noted just a very tiny amount of backlight spill, emanating from the top-right corner, but bright screen uniformity was top-notch with only the faintest amount of panel array banding sometimes spotted on panning scenes over pale colours. There was no nasty dirty screen effect however, which is something that’s almost routinely noticeable with LED/LCD TVs – even in those costing far more than the H5500.


We think Samsung's UE48H5500 is tremendous value. In sheer picture quality terms, it’s more than a match for many TVs costing considerably more with great blacks, fantastic colours and excellent screen uniformity. What it lacks is a fancy design, any 3D capability and a smart remote but there will be plenty of people willing to sacrifice those to grab themselves what amounts to a Best Buy. You do get a great range of Smart TV apps regardless of the low entry price and we can think of very few entry-level connected televisions that come anywhere near matching the H5500.


What else could I consider?


We’re scratching our heads here, in all honesty. About the closest we can get is the Panasonic 48AS640 but that will set you back quite a lot more cash, although you will get 3D to sweeten the deal. Perhaps you could also consider the LG 47LB700 which features both 3D and LG’s amazing webOS platform but, again, it’s a sizeable amount more in the shops. Failing that, take a look at our various Buyers Guides to find something that may tickle your fancy.