The end of an era, perhaps? 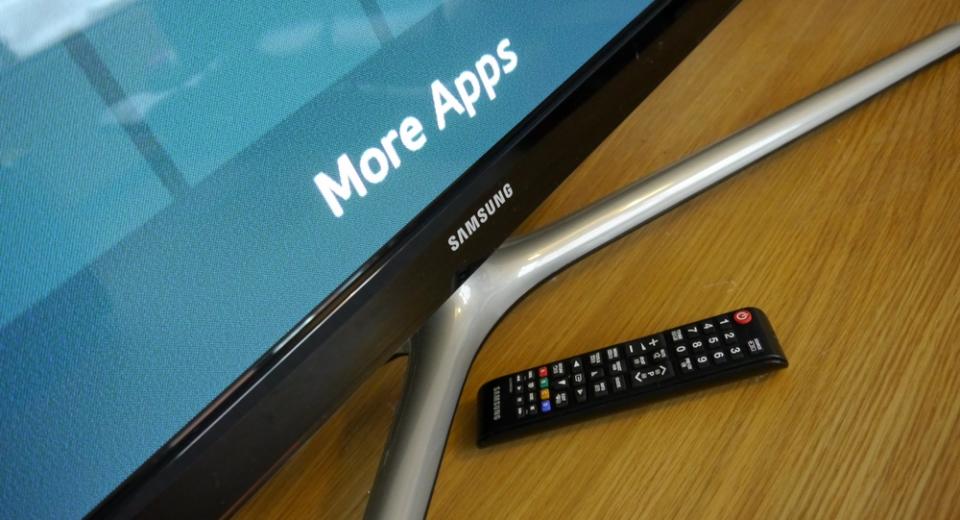 We have to reflect that this may well be the last plasma TV AVForums ever reviews.

Panasonic have exited this product sector, leaving only the two Korean heavyweights remaining. LG also half-heartedly still knocks a few PDP’s out but you have to wonder whether they, or Samsung, will announce any new plasma TVs at CES 2014, with focusses now firmly on 4K and OLED as the future of televisual technology.
This here Samsung 60-inch F5500 is currently available at under a thousand pounds. That’s a tremendous amount of screen real estate for your money and if it performs anything like what has gone before, a potential steal. With Christmas around the corner, this could be a stocking filler of outsize proportions. Not the best looker but it's what's within that counts.

Big it is, beautiful it is not particularly with a relatively hulking chassis and a plain glossy back bezel that isn’t the most slender either. Not even the quad-footed stand - which doesn’t really match the rest of the package - saves it from design mediocrity. No matter, plasma fans know that real beauty lies within and we can forgive a bit of blandness in this sector of the market.

Connectivity options are serviceable, if not best placed. There are 3 HDMI ports, typically too close to the edge of the bezel, a couple of USB’s, some legacy inputs for Scart and composite equipment and a digital audio out. There’s also a LAN port but there’s built-in WiFi if you’re internet connection isn’t close enough to your TV cabinet. There are choices of remote control. One is a standard, but slightly small and cluttered, handset whilst the other resembles a prop from a sci-fi movie with a touch sensitive pad that can be used to scroll and a built-in mic enabling voice commands. The Smart Touch Control is actually pretty good and the voice commands work surprisingly well but for day-to-day use we still found ourselves reaching for the boring old remote.

There are no surprises contained within the F5500’s menu system but there are an awful lot of options for an entry-level TV. Most of the unnecessary picture options can be sidestepped by using the Movie picture mode but a few, such as MPEG Noise Reduction, stay at auto so its worth a couple of minutes exploration and adjustment to ensure you’re getting the best for your HD images. Calibration controls include a 2 point white balance and a gamma slider and we’re particularly interested to check out the progress of the Black Optimiser function which had some side effects with earlier software revisions. The Samsung 60F5500 is actually well blessed for a model of its standing. In fact there’s, more or less, all the good stuff found in the flagship models, including access to on-demand services from BBC, ITV, C4 and Channel 5 and Samsung remains the only TV manufacturer to boast the full suite of free to air catch up services. There are also plenty of others including Netflix, LOVEFiLM, BlinkBox, Wuaki TV and YouTube and a fancy-ish recommendation engine which tracks your viewing habits in order to serve you viewing suggestions. It doesn’t integrate with all the included video services, at present, but no doubt Samsung is working on that behind the scenes. There’s plenty more besides but you can read a more in-depth review of Samsung’s Smart TV platform here. It was immediately apparent that the Movie Picture Mode, as ever, provided the best bet for accurate images from out-of-the-box. There was an excess of red in the greyscale, particularly near white and red was considerably under-saturated using the Auto Colour Space. The alternative, Native, is usually a bit ‘wild’ but since we’re so far out in the first instance, it’s something we’ll look at below. There’s only a 2 point white balance control aboard the F5500 but after a few calibration runs we were able to achieve an absolutely excellent greyscale with a just a bit of a surfeit of blue dotted here and there. Without 10 point controls, it’s very difficult to get a ruler flat gamma response but the results are certainly good enough with no visible errors noticeable. We did, in fact, end up going with the Native Colour Space as a better compromise, despite the large hue error in green. And as we can see from the chart below, which tracks colour fidelity at lower saturation points, performance is actually pretty good so we had to forgive the slightly blueish tinge to deeper greens.

The interesting thing about the 2013 Samsung plasma line-up this year has been the inclusion of a new Black Optimiser setting. When we tested the 51-inch model we found that whilst a setting of ‘Dark Room’ would induce blacks to float – i.e. fluctuate in luminance dependent on what’s on-screen. It was a shame as, when it worked, it was very effective in providing deep and satisfying black levels. The good news is that Samsung appears to have fixed the issue so in our typical viewing conditions of just some backlighting behind the display, we were more than happy to have it engaged, giving the 60F5500 dynamic range well above its status. For those interested in the numbers, average black levels measured 0.026cd/m2.

That is an excellent result and surpasses the performance of all the 4K LED TVs we’ve tested recently, for some perspective. For further perspective, those TVs will cost you between 4 or 5 times the entry price of the F5500. Screen uniformity was typically excellent for plasma but we did note some fairly lengthy image retention from on-screen logos and our test patterns. In ‘normal’ use these could take anything between 2 and 4 hours to fully clear although, it has to be said, it was rarely visible in typical use.
Floating blacks are fixed and contrast performance is excellent.
Picture Processing

The PS60F5500 is blessed with very capable video processing. Scaling of standard definition content was very competent and, considering the screen size, non HD content was far more watchable than expected. It proved reasonably good at video deinterlacing although we could see some jaggies on our rotating bars tests. With the Film Mode set to Auto 2 the F5500 also had no issues locking on to both 3:2 and 2:2 film cadences correctly. The quality of the video deinterlacing at 1080i50 was also very good and there were no apparent issues with 24p content.

There’s no requirement to change any input labels, as you have to with some Samsungs, to extract the most responsive gaming performance out of the F5500. It’s still a bit of a phaff as you are required to enter the System Menu and then find the Game Mode under General Settings but it’s worth the bother as it slashes input lag down to 38 milliseconds from somewhere over 80. You will probably want to alter the Picture controls a little – knocking down the Sharpness to 0 and changing the Colour Temperature to Warm 2 is a good start – and you will be then rewarded with a superb big–screen gaming display. Perfect for your new PS4 or Xbox One!

The Samsung F5500 has only one issue of note and that’s its inability to cope with medium to high levels of ambient light. It’s certainly not a television designed to sit opposite a window or in a living room with much overhead lighting but in just about every other situation, you’ll be amazed at how great this budget TV looks. As we saw above blacks are very deep, lending a real punch to picture and details in the shadows aren’t clipped nor spoiled by the uniformity issues typically found with LED/LCD counterparts. Motion handling is also glorious, making sports and action movies a treat for the eyes and until you’ve watched a big match on a really big screen, you don’t know what you’re missing.
Why is nobody interested in plasma? The F5500 kicks the butt of many a flagship LED TV
The colours might not be as accurate as some TVs we’ve tested but it was generally difficult to pick up on any noticeable issues and the almost completely neutral greyscale gave an excellent backbone. Sure, with material we were familiar with, we could see the inadequacies in green hues but we’d be willing to bet that those not used a calibrated display would have no idea anything was amiss. We wouldn’t advise sitting too close either as the nature of the panel driving means it can look a touch dithery from anywhere inside 6 feet and there’s a certain amount of dancing green pixels in black areas that can be seen from inside 4. These aren’t really what you could call serious drawbacks, more a word of caution and that we mention them at all is testament to the fact we’re struggling to find any issues to report. In summary, the Samsung 60F5500 delivers outstanding pictures that completely belie the price-tag.

3D images were creditably bright for a plasma TV of this size and mostly free of distracting crosstalk or ghosting issues. The small issue with frame skipping we saw previously with 3D Blu-ray encoded at 1080p24 seems to have been resolved, or at least that was our experience with Life of Pi and Oz the Great and Powerful. Broadcast 3D isn’t quite dead yet in the UK, although the writing appears to be on the wall, so those of you with Sky 3D subscriptions will be pleased to learn that the F5500 carries over its largely pleasing performance to side by side content at 50Hz. Again, at under £1,000, this TV is vastly over-performing in its 3D output.

The Samsung 60F5500 is not a TV you’re going to be drawn to either on the shopfloor or when browsing online. It’s all a bit 2009 in terms of design with its plain black bezel and badly matched grey quad-foot stand. It also has quite a bulky chassis but at least that’s home to a decent array of connections, including 3 HDMI, 2 USB as well as wired and wireless LAN.

It may not be blessed with good looks but it’s not short of features, including the bundled Smart Touch Control which features both voice and gesture based control methods. In truth, we generally used the standard handset for convenience but it’s good to see Samsung servicing the budget end with such luxurious goodies. Additionally, the F5500 is packed with just about every feature Samsung’s superb Smart TV platform affords, including loads of VoD services, games, a viewing recommendation engine and a web browser.

If you can get past the less than designer looks and you don’t intend to stick this TV in a bright room, then it does represent a veritable bargain. The F5500 is very reflective and the filter does little to stop ambient light washing out the impressive contrast levels but, in just about every other situation, it’s glorious. Colours, though not as accurate as some, are perfectly believable, video processing is such that even lowly SD content can look palatable and motion handling is simply sublime and, of course, HD images are simply outstanding.

If this is to be the last plasma we ever review, then at least the technology is going out in fitting style. It’s a steal at under a grand and a sure-fire Best Buy.

Can someone remind us why nobody is interested in Plasma again, please?