Samsung brings NFC (as well as music) to the party 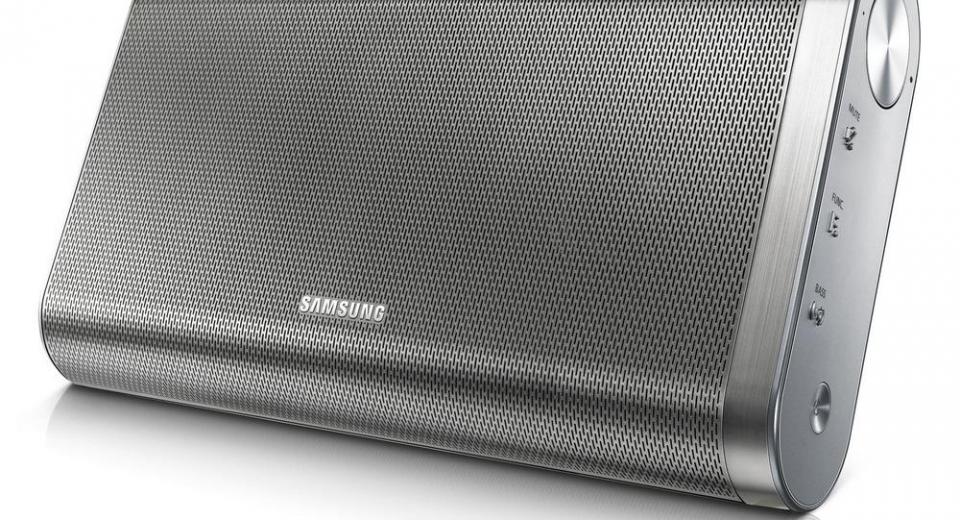 Music on the move – everyone seems to want it nowadays but something nobody really wants is the encumbrance of old-fashioned wires; they are ugly and get in the way - always have and always will. Cottoning on to these facts and the advances in technology that allow us to carry our music collections around in our pockets, to be streamed via a range of wireless technologies, or from the internet cloud, has seen manufacturers produce an almost bewildering array of wireless speakers with which they hope to tempt us in to handing over our readies. The Samsung DA-F61 is one such device and comes with the very latest in wireless streaming technology, Near Field Communication (NFC), to up the ante. Style over substance perhaps? Let’s see.

The DA-F61 clearly shares the same styling ethos as some of Samsung’s other 2013 audio products with a fine mesh design very similar to that of the HW-751/750 and, like those soundbars, comes in a choice of silver or black, where the black options’ product number ends in a zero. It’s the DA-F61 that we have here for review and it certainly looks and feels the part in terms of its surprisingly weighty construction.

The sleek lines are cleverly maintained as the volume dial can be recessed, if desired, and the three selection buttons for inputs and extended bass are more or less flush to the surface, with the power button recessed at the bottom. To the rear are connections for a 3.5mm aux input for your phone, MP3 player, smartphone etc. and a USB slot for software updates and charging, i.e. there’s no playback capabilities via USB. There’s also a connection for the power adapter but there’s a rechargeable battery inside which gives around 8 hours playback life - Samsung claims 10, but 8 is enough for most. Since NFC is one of the headline features, we thought we’d start there and we’re pleased to say the DA-F61 paired instantly with our Nexus 7 by tapping the back of the tablet to the symbol on the side of the speaker. Once the NFC attachment has been made, the two devices communicate via Bluetooth to stream the audio. It’s worth noting that those running lower than Android 4.0 (Jelly Bean) will need to download an app to enable NFC with their device. Of course, those without NFC capable devices aren’t excluded and there’s an aux input and ‘straight’ Bluetooth connectivity to cover the bases, although you’ll need to go through old fashioned menus to connect via the latter.

If your DA-F60/61 turns up, as ours did, with the protective carry cover attached, pretty much the first thing you want to do is dis-attach or at least unfurl before listening. We’d imagine some might be caught out in to thinking the default configuration is usable but it isn’t as it’s remarkably acoustically opaque, muffling just about everything and causing a disturbing rattle with bass notes.

Once given room to breathe, the DA-F61 is quite remarkably powerful given its 225 x 46.5 x 131 mm dimensions, belting out bass with an authoritative clarity it really has no right to achieve. There’s even an option to give the bass a boost with a button to the side but there’s no real need to push the passive radiator any harder as it does a great job and you’ll far more easily notice distortion in doing so. The DA-F61 isn’t just a little boom-box either and is capable of delivering lush harmonics and acoustics with equal aplomb and will easily fill your average kitchen or bedroom with more sound that it’s ever likely to need without cracking under the pressure. The 2 x 10W speakers have little room to give any real sense of stereo separation unless you’re sitting bang in front but that doesn’t really matter. It’s not a high-end stereophile product, it’s for those that value style and convenience but want a cut above the average £150 wireless speaker - of which there are numerous – in terms of audio performance. We’d say it succeeds very well in those remits.

The Samsung DA-F61 is a beautifully packaged little speaker with outstanding connectivity and a rich, powerful audio delivery belying its diminutive footprint. It might cost a little more than some but it boasts dropout-free wireless audio streaming and rock solid engineering where others might not. Highly Recommended.