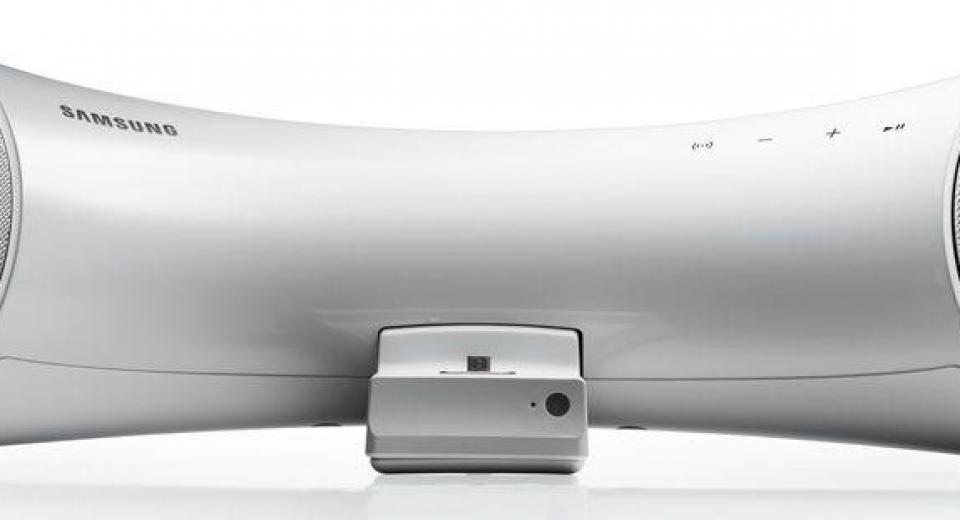 By their very nature, audio docks tend to suffer from a lack of stereo separation, it is an unfortunate side effect of having two speakers close together in a small chassis. Samsung have clearly been thinking about this and have come up with an interesting solution that is both simple in its implementation and striking in its appearance. The new DA-E550 Dual Dock uses an innovative horn shape that retains the smaller size of an audio dock but adds a greater degree of stereo separation. Not only that but it also has a pop out dock that includes the standard Apple 30 pin connector and a 5 pin connector for attaching a Galaxy device. Once you throw Bluetooth and a 3.5mm jack into the mix, you can connect just about any audio device to the E550. So it's time to assemble some of those audio devices and see how the E550 sounds.

If nothing else, the E550 is certainly a design statement with its striking horn based shape. There might well be genuine acoustic reasons for taking this approach but for the shallower amongst us, the E550 also looks cool and stands out from the crowd. The gloss white finish and unusual shape of the E550 give it a very contemporary appearance that will certainly appeal to the iPod disciples. At either end of the horn shape are the speakers, which have detachable grilles, and the smooth lines are undisturbed by buttons or other features. One of the major advantages of being a large multinational is that you benefit from economies of scale and as such the E550 has an excellent level of build quality. It also measures 463 x 122 x 152mm, weighs 1.6kg and has a rated power output of 5W per a channel.

There are some basic controls which are represented by touch sensitive icons for bass optimisation, volume +/- and play/pause. At the centre is the pop out dual function cradle with a 5 pin connector for Samsung Galaxy devices and a 30 pin connector for Apple devices. On the front of the cradle there is the infra-red remote control sensor and the standby LED, which lights up when in standby mode and goes out when the E550 powers up. To power up the E550 you either press the play/pause icon on the unit for more than 3 seconds or press the power button on the remote control. The E550 will take about 4 to 5 seconds to produce any sound after being turned on and it will automatically turn off if there is no input for 20 minutes. At the rear there is a connector for the provided DC adapter and a 3.5mm AUX In jack for connecting the analogue output of another external device. There is no user accessible USB port, although there is one that can be used for servicing the unit. The E550 comes with a simple remote control that is small and thin and easy to use. There are basic controls, including on/off, play/pause, skip forward/back, volume up/down, mute, function selection and bass button. If you press the F (function button), it will cycle through the iPod (iPhone), Galaxy (Bluetooth) and AUX modes.

The inclusion of Bluetooth is one of the major selling points of the E550 because not only is it convenient but it also means that you can connect any Bluetooth enabled audio device to it. The E550 uses Bluetooth 3.0 and the superior apt-X codec, which helps eliminate any loss of quality when playing music wirelessly. The E550 allows for faster streaming of data without losing the original sound quality, which is usually the case with file compressions. The relatively new and highly regarded Bluetooth 3.0 and apt-X technology will maintain a CD level of quality with music played wirelessly, so if you are serious about sound quality, Bluetooth 3.0 with apt-X technology is a must have feature.

If you own a Samsung Galaxy device, you can download the Samsung Wireless Audio App and play music from Galaxy devices and access a range of useful features. You can check battery level, find out what the time is and hear reports of the weather and even the current temperature. In addition, Bluetooth enabled Android devices benefit from auto pairing, which makes streaming and enjoying your various music collections nice and easy. The app can also remember where your music stopped playing after being disconnected for a phone call, and will then play from that very same spot when reconnected. One of the other big selling points of the E550 is the inclusion of the dual device docking cradle which gives you the option of connecting an Apple device (iPod or iPhone) or a Samsung Galaxy device (Galaxy S II or a Galaxy Note). The cradle itself can be pushed inside the chassis when not be used and can pop out when needed which makes for a tidy solution to those that want to physically connect their device to the E550. Aside from the ability to maintain the highest possible audio quality by physically connecting your device to the E550, it can also recharge the devices battery at the same time. The E550 comes small rubber supports that can be attached the front to prevent your device scratching the chassis and there is also a protective rubber skin that can be added to the dock itself if you feel the need.

The audio performance of the E550 was actually very good and the positioning of the speakers definitely made for a more expansive sound stage than on many other audio docks we’ve tested. Overall the E550 could deliver a very pleasing sound that, whilst not perfect, was certainly capable of providing a very engaging experience. Like all audio docks it probably isn’t the best choice for listening to complex orchestral recordings but it manages to avoid the pitfalls of sounding like a mono box. The sound retained an excellent level of detail, which made it easy to pick out subtle nuances in the recordings. The midrange and top end of the E550 had a pleasing richness and realism and, as a result, voices in particular retained believability. Be it pop or rock, the E550 was able to do the recordings justice.

The bass response of the E550 was not quite as convincing but it does have a decent sized footprint for an audio dock and enough weight to give it some presence in the lower frequencies. What bass there was did manage to maintain enough detail to compliment the higher and mid-range performance, without becoming too boomy or distorting. The E550 was also reasonably flexible in terms of placement and could be positioned around a room without generating too much bass and swamping the higher frequencies. The bass button on the remote could be used to give the lower end a boost if needed, although we found that we generally preferred the sound without the bass button engaged. Aside from the option to boost the bass, we're glad to see that Samsung has resisted the temptation to add any DSP effects to the sound, opting instead to keep the audio unprocessed.

As mentioned previously, the E550's unusual design does allow for a more expansive sound stage but it is rather lacking in the power department. Since each speaker is only rated at five watts, the E550 is not suited for particularly large rooms or those who like to listen to bass heavy music. However, the E550 did perform very well in smaller rooms like an office, bedroom or kitchen and in these environments it could deliver enough power to make for an enjoyable listening experience. The main issue with the E550's lack of power, is that you can experience some distortion once the volume control is turned up too high. So if you’re the kind of person who enjoys listening to music at high volume levels, then the E550 might not be the best audio dock for you. If, on the other hand, you prefer listening to music at volume levels where you can still distinguish fine detailing in your favourite recordings, then the E550 can certainly deliver.

The Samsung DA-E550 is certainly an attractive audio dock and its unique horn shape serves the dual purpose of looking both cool and delivering a wider stereo soundstage. The gloss white finish gives the E550 a contemporary appearance and the build quality is very good with a nice finish and a solid feel. There are some basic touch sensitive controls on the E550, itself, and it comes with a simple remote, although there is also an app for those with Galaxy devices. At the centre of the E550 is a pop out dual function cradle with a 5 pin connector for Samsung Galaxy devices and a 30 pin connector for Apple devices. The E550 also has Bluetooth 3.0 with the superior apt-X codec for connecting with other Bluetooth enabled devices and there is a 3.5mm jack at the rear for just about anything else.

The use of Bluetooth 3.0 and the aptX codec results in a very high quality wireless connection for audio but for those who prefer their connections to be physical, the dual dock is equally effective and it can charge your device at the same time. The audio performance of the E550 was actually very good and the positioning of the speakers definitely made for a more expansive sound stage. Overall the E550 could deliver a very pleasing sound that, whilst not perfect was certainly capable of providing a very entertaining experience. The sound retained an excellent level of detail and whilst the bass response of the E550 was not quite as convincing, it still retained some presence in the lower frequencies.

The E550 is also reasonably flexible in terms of placement and could be positioned around a room without generating too much bass and swamping the higher frequencies. Since each speaker is only rated at five watts, the E550 is not suited for particularly large rooms or those who like to listen to bass heavy music. However, the E550 does perform very well in smaller rooms like an office, bedroom or kitchen and in these environments it can deliver enough power. Overall the Samsung DA-E550 is a very impressive audio dock that combines an attractive and unusual design with excellent sound quality and an impressive stereo sound stage. The inclusion of both the dual dock cradle and Bluetooth makes it compatible with a wide range of devices and the ideal choice for anyone looking for an effective and well-crafted audio dock.