Smart, swift and well-priced but is the 4K scaling beneficial? 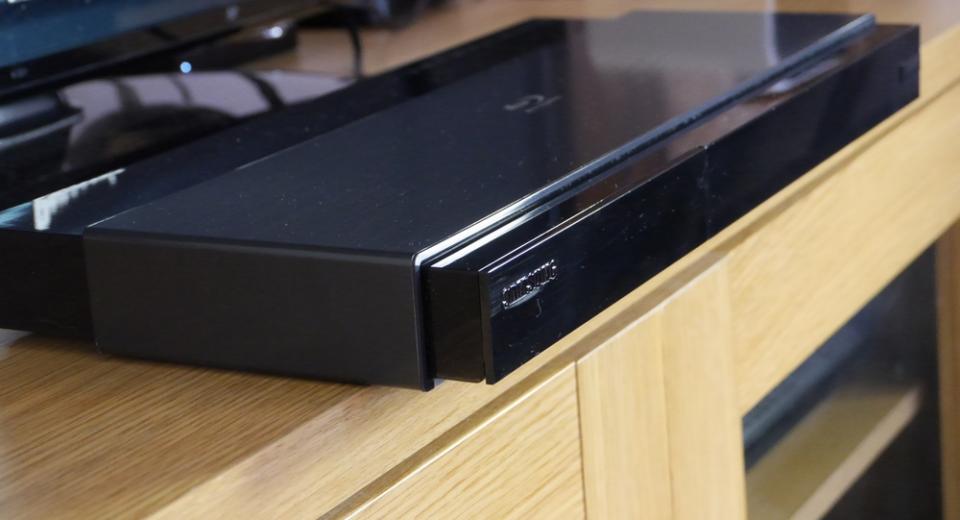 This one comes from the upper echelons of Samsung’s 2015 Blu-ray Player range and, as such, features an enticing array of Smart TV applications, in addition to its disc playing capabilities. Samsung’s connected portfolio is extremely strong and boasts access to all the major UK catch-up services and most of the key streaming apps, too, so if you exhaust your DVD and Blu-ray supply – both 2D and 3D, you’re not going to be short of something else to watch. Priced at around £170 (April 2015), this isn’t the cheapest Blu-ray player around but then not many boast dual HDMI and 7.1 analogue audio outputs, nor the 4K/Ultra HD scaling the BD-J7500 has on-board.

For a Blu-ray player, the J7500 sports quite a notable design. OK, essentially it is a black box but there’s a charcoal grey housing which covers about two-thirds of its hull. The fascia features a tray loading disc mechanism which pops out from behind a black mirrored flap and adjacent to that is a clean and simple Vacuum Florescent Display (VFD) panel. Above the panel are four VFD, touch sensitive controls which illuminate when the unit is switched on. There are plentiful connections at the rear, in addition to the concealed USB port at the front. The inclusion of 7.1 analogue audio outputs is the most notable option but there’s also the relatively rare sight of dual HDMI outputs on the connections panel. This will allow those with AV Receivers which aren’t capable of receiving 3D or 4K video to hook up their 3D/Ultra HD TV and AVR separately. You also get a Toslink digital optical audio output and, bar the LAN and WiFi connections, that’s your lot.

7.1 analogue audio and dual HDMI are unusual in this section of the market

The BD-J7500 is capable or reading Blu-ray, DVD and CD discs, with DVD±R , DVD±RW and CD DA, CD-R, CD-RW all playable. Supported audio file formats include LPCM, AAC, WMA, FLAC and for video files we have playback of DivXHD, AVCHD 4.1, MKV and WMV. Audio processing support includes DTS-HD Master Audio (up to 7.1), Dolby TrueHD (up to 7.1) and the player can ‘upscale’ and video signal to 4k Ultra HD resolution. The dimensions of the unit are 43 x 430 x 201 mm (H x W x D) and it tips the scales at 1.7Kg.

Samsung has retained the one-screen design to the Smart Hub launched last year and that’s a good thing. The page is divided in to three main areas with a ribbon of apps underneath, plus shortcuts to the Screen Mirroring function and Settings Menu. Just a note to those picking up the BD-J7500, make sure you have the latest software version installed from the System Menu, as V1.001 is quite sluggish around the Hub in comparison. The largest amount of Hub space is devoted to Multimedia playback for devices either connected via USB or on your home network. We found file support to be as advertised in the specs above and interaction with Windows Media Player on a Windows 7 PC to be excellent, with very swift folder structure navigation. From the Samsung Apps portal you have access to dozens upon dozens of other services, with highlights including Amazon Instant, All 4 and Spotify in addition to the pre-installed BBC iPlayer, Netflix and YouTube apps. We note that Demand 5 and ITV Player are not yet available but they will follow in due course, according to Samsung. The Screen Mirroring function was a hit and miss experience with only our (Samsung) Galaxy S4 - out of a possible 4 devices - working as expected. This isn’t a new thing, however, and frankly the industry-wide implementation of this feature needs improvement.

All the streaming services you could wish for (nearly).

As we would expect, Blu-ray playback on the J7500 was generally excellent but there is just a hint of high frequency detail repression present. We’ll be quite honest and say we could only see it in static test patterns, where lines of individual pixels would intermittently soften and blur and it’s not something we were conscious of when watching a movie. We’re not sure why Samsung would want to do this but as long as it’s not infringing on everyday viewing we can give them a pass. Otherwise, in terms of colour and motion, the BD-J7500 was flawless, and that was the case whether viewing in 2D or 3D.

We tested the player in conjunction with the Samsung 48UEJS9000 and found there was virtually no difference in terms of its processing, compared to the televisions’ when using a 1080p source. There was an extremely similar performance with 720p signals but we’d perhaps give the Blu-ray player the slight edge with standard definition DVDs, which displayed just a little less ringing than the panel’s own scaling engine but there’s only so much that can be done when nearly 8 million pixels consist of ‘guessed’ information.

It seems a little ironic that we’re mentioning this in the context of a disc player review but such are the times. We extensively utilised the Netflix, Amazon Instant and BBC iPlayer apps with each loading and getting to Full HD resolutions very quickly. The new TV based YouTube app tops out at 720p however, although we can’t lay the blame at Samsung’s door for that as it seems to be a cap at YouTube’s end.

This is one of the most responsive Blu-ray players we’ve tested to date, with most discs ready to play before we’d resettled in the armchair. We’re talking under 15 seconds, in most cases, which is incredibly nippy. The disc mechanism is fairly noisy during load and seek operations but should be hushed enough for most during actual playback. When sat right next to it, we could hear a very faint whining sound but from 4 feet, or more, it was inaudible. Considering most people are likely to stow away their player in a unit or rack, we can’t see that the BD-J7500 is going to trouble anyone in the noise department.

The Samsung BD-J7500 is an excellent disc player and Smart TV device rolled in to one attractive little box. It features dual HDMI output, for those with older AV Receivers and also 7.1 analogue audio outputs, for those that need them. Both of those connectivity options make it stand out from the crowd at this price-point but, of course, you get all the usual inputs and outputs too, including a main HDMI output, Toslink audio, wired and wireless LAN, plus a USB port for storage and multimedia devices. Build quality is decent, rather than outstanding, with a rather noisy disc mechanism when seeking but it was quiet enough during playback, provided you’re not sat right on top of the player.

The Smart TV features also enable the BD-J7500 to distinguish it from the pack, with virtually all the catch-up and streaming services you could want, in addition to a robust local and network media player. In terms of video playback, the J7500 is near flawless, too, with excellent video processing getting the most of whatever you throw at it. There was a slight issue with high frequency detail masking with static video patterns but it wasn’t something we could see with real world viewing material. We’re not totally convinced the headlining 4K Scaling feature brings that much to the table, over and above what your Ultra HD TV will be capable of, but that hardly detracts from the package.


You’re not short of alternatives in the sub £200 Blu-ray player market and if you have no use for the extra HDMI port or 7.1 analogue outputs, you could definitely save yourself a little money. In fact, you can still pick up Samsung’s 2014 BD-H6500, which will fit the bill perfectly and the same applies to the LG BP645, which at April 2015 prices, is about half the cost of the BD-J7500.