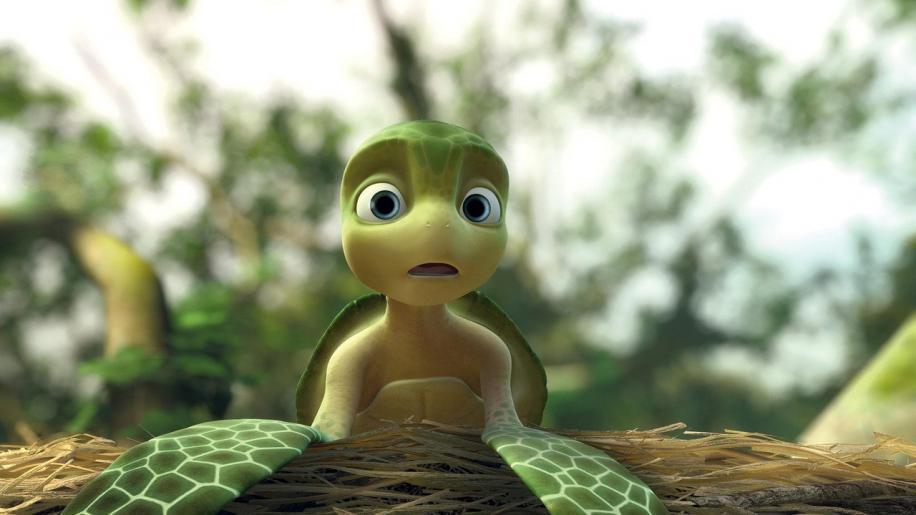 While we’re still waiting for Pixar’s Finding Nemo to hit the shores there is time to paddle in nWave and Illuminata Pictures underwater odyssey A Turtle’s Tale, where we follow Sammy the turtle on his adventures around the globe. Or that’s what the promotional material would have you believe. In fact, Sammy’s Adventures whilst obviously aquatic in nature are a far cry from anything Pixar would have dreamed up – it's a turgid, lacklustre, drawn out and plain boring piece of animated fluff that had me clock watching even at its 86 minutes runtime. So strap on your diving tanks and let’s submerge ourselves in the dark waters that is A Turtle’s Tale.

The film opens on a beach, and the narration of John Hurt as he exposits about his life; Sammy is a green sea turtle, some fifty years old and he is going to tell of his life, his journeys, his adventures and his brushes with mankind, for better or for worse, but to do that we must start right at the beginning. This opening gambit is very good at setting the scene, we understand that Sammy is now quite aged, we know that he has friends, we realise that he has a little distain for humankind and we can see that the animation leaves a lot to be desired. Whilst the beach landscape is nicely seen and the sun setting has good colouring, the animation of the waves is appalling – things do move on very quickly but the lasting impression is one that will taint the whole film; drawn out exposition and bad animation. And we’re only a few minutes in.

Sammy’s story starts at his hatching, he is the last to escape his comfy shell and is unable to escape the hole that was dug for him. His only salvation is the jaws of a gull intent on eating him – of course there is no peril here as we already know he survives to tell the tale but this short scene does introduce the second major character, and Sammy’s eventual mate, Shelly (not an obvious name that one) who was also caught; their miraculous escape being affected by the two birds colliding mid-air. Cue inevitable longing and dreaming about a future. Unfortunately Sammy’s fall knocked him unconscious and Shelly, in what will be a regular occurrence, and he are separated. The incoming tide breaks away the small amount of jetty that Sammy was on and he begins his first journey into the wide open sea. Sammy, at this point, is presented as being a little afraid of the water and of where he is going or what he is meant to do – now I don’t want to come over all naturalist, and I know this is a device meant to endear the little turtle to us, but a turtle afraid of getting into the water ...? Please! I digress. As Sammy floats about we are introduced to Ray, a leatherback sea turtle, as he tries in vain to join a number of greens as they float around on seaweed. All the greens gang up on him and he is unable to find refuge, that is until he meets Sammy on his raft, the two form an instant bond and together they start to explore their new world.

With the introduction of Ray we are witness to some of the better aspects of the film, the visuals. Director Ben Stassen doesn’t have a huge amount of experience with feature films, but what he does have is an eye for 3D, most of his output has been in that format – and it pays dividends here, whilst the above ground animation isn’t great, the underwater stuff works extremely effectively as the camera travels over, round and through reefs and rock formations (more on this in the picture section). However, concentrating purely on this visual aspect at the expense of the story will inevitably lead to disappointment and it surely does. The characterisation of Sammy and Ray are such that even though you spend time with them, they are never much more then superficial, so when an element of danger comes across, in this case, both are captured by trawler nets on separate boats, and thus separated from each other, there is very little trauma felt – what should have been a heart wrenching split (think of when Nemo was captured) is instead met with apathy.

Leading on from Sammy’s capture and subsequent release is the continuing theme that is presented sledgehammer style; man affecting his environment – comments on oil spillage, rubbish dumping, whaling and global warming are shoehorned into the narrative as a warning, and it's all clumsily done. I did appreciate the flip side though, that of the conservationists, and Sammy’s parting line that the turtles, despite their reluctance to live alongside mankind, are now very much dependant on them for their survival, which was dealt with without the usual saccharine of some of the major Hollywood studios.

So, back to the story, with Ray being thought dead, it is time to reintroduce Shelly, and the pair find a burgeoning love, but before that comes to fruition they decide to explore the world, to find the secret passage (the passage of its original title), the sweet water, the ice ocean and eventually the paradise island. However, things don’t quite go according to plan when Shelly gets lost in the lock of the Panama canal (the 'secret passage') and thought dead. Again, in what should be a hugely traumatic event fails to even inspire. Once again lost and alone Sammy travels on to eventually being rescued in the arctic by whale conservationists. Contrivances involving these conservationists, and Shelly, finally reunite Sammy with Ray and after another drawn out sequence, Shelly. Until we finally come full circle to Sammy, telling his story, on the beach at the beginning, rescuing a tiny turtle unable to get out of the shell hole.

The story tries valiantly to balance love, friendship, conservationism and global environmentalism in a sweet story of two turtles finding themselves but fails to engage on any of its levels. Stylistically the film looks pretty good, the animals look good and the 3D is wonderful in places, but there are far too many scenes that are protracted to such an extent that you lose interest in what’s going on – it’s run time is 86 minutes and you could half that and still have all the story elements. I like the fact that there are circular elements to the narrative, the loss and found nature match well with the map circling the globe; but the characterisation is never focussed enough for us to really care about the characters, the script is more interested in getting to the next scene to show the environmental issues than development and thus when Sammy goes through his emotional turmoil, he does it alone, and that separation means the film falls flat. I’d like to say that, that’s ok, because it’s clearly a kids film but that simply doesn’t wash, look at anything that Pixar have done. It may be that it is a lost in translation feature in that the film originally hails from Belgium (though made in English) with the original title - Sammy's Avonturen: De Geheime Doorgang – which translates to Sammy’s Adventure: The Secret Passage which is only specific to the central element to the film, and perhaps conjures up ideas that don’t actually materialise in the film; thus a new title was given, but even that suffers from the same problem, there simply is no adventure to be had!

Having said all that, I didn’t hate the film, it is certainly not very good, but there are elements to be enjoyed, trouble is they are so few and far between that the best way to watch it is with the skip button. And it is unlikely that children will get more than one watch out of it either. On the whole, probably best wait for Nemo ....