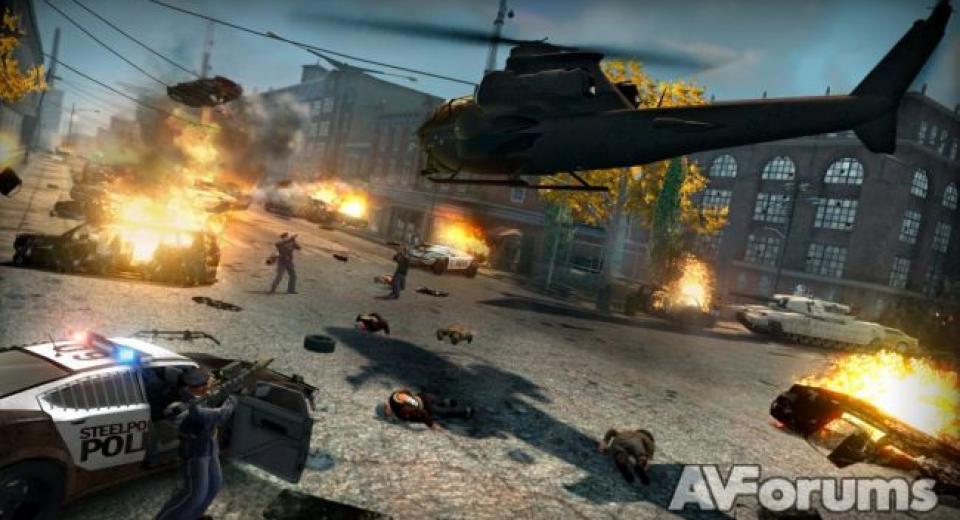 Anyway, we asked one hundred people to name a Grand Theft Auto clone. Can you give us their top answer?

That's right! Saints Row. You win a VCR and a canal holiday for the whole family.

As probably the first bona-fide GTA rip-off of the current generation, Saints Row blazed its trail in the safety of Rockstar's zillion dollar franchise's slipstream. And why not? There are second-rate copies of popular works in all media (see the supernatural subsection of the Young Adult shelves in your local bookshop, for example).

But with Saints Row: The Third, Volition and THQ have made a conscious decision to set their series apart. Sure, it’s founded on the same principles and there’s much to remind you of Liberty City, but the approach they’ve taken to gameplay is entirely different. The story, for what it's worth (note: not very much at all) is set in the near future where the 3rd Street Saints have reached celebrity status, with their own brand of energy drink, a movie deal, and hordes of obsessed fans. They quickly lose everything however, and find themselves all but destitute in the thoroughly forgettable city of Steelport.

Like its predecessors, The Third is a flawed game. It’s riddled with minor glitches. For example, if you shoot a driver, their body will disappear as you open the car door. It's hardly game-breaking, but small bugs like that stack up.

More seriously, there are real issues with how the graphics are processed and displayed on the Xbox 360. There’s an extremely short draw distance, lots of late pop-in, and a ton of screen-tearing, all of which particularly affects flying over the city. So how does a game with sub-par visuals, an unimaginative setting, knock-off mechanics and minimal plot get four stars? Let the justification commence...

I can imagine the people of Volition in the Saints Row: The Third brainstorming meeting. There’s a white board with loads of ideas jotted down. In the middle of all the ideas, written in caps in red pen and underlined twice are the words: “What did GTA 4 fail to deliver to fans of GTA 3?”

Rockstar’s focus has increasingly been on delivering bleak realism with a pinch of left-leaning satire. Volition have thrown reality out of the window altogether.

To that end, the first step was to create a near-future setting. To be specific: near enough that they don’t need to put much thought into how society, architecture and all that boring stuff might have changed, but future enough that they can have big lasers.

Then they all but abandoned physics. Cars and planes respond instantly, they're a joy to control. You routinely exit your penthouse apartment by leaping from the balcony. Ruined cars that you’ve modded are magically revived if you look away from them for long enough. For whole missions at a time you’re given infinite ammo without a word of explanation.

The upshot of all this is to remove the barriers that prevent you from enjoying the chaos. It’s as close to frustration-free as you’re likely to find in an open world game.

You're introduced to the mechanics through a linear opening sequence that sets the tone for many of the spectacularly outrageous set-pieces that will follow. These opening scenes include shooting down helicopters while suspended from one yourself, and a skydive from approximately the moon. It's stupid and over-the-top and utterly exhilarating. Later missions see you trying to stay on the road while a tiger snaps at you from the passenger seat, and shooting at gimp-drawn carriages. It’s bonkers. It makes Just Cause 2 look like a documentary.

The imaginative content and the freedom offered to players more than counterbalances the technical shortcomings. An unashamed focus on fun over reality is refreshing in a generation of games defined by grit. Nothing in this game is gritty, and it's all the better for it. It's worth mentioning that this game is fully deserving of its age certification. It's one of the most '18' games I've ever played. When the Daily Mail rants about the terrible things players can act out in games, and they cite Modern Warfare and Grand Theft Auto and so on, what they really should be talking about is Saints Row: The Third.

Morally, it's a vile little game: it's routinely misogynistic, it revels joyously in aggression against innocent people, and rewards you for psychopathic behaviour. By way of example, here are three of the game's challenges: carry out 250 carjackings, hold up 15 stores, run over 500 people.

It's not just that the game allows you to steal cars, rob shops and mow down pedestrians; it actively rewards you for it.

But the truth is this game is a blast from start to finish. The technical and ethical issues should be off-putting, but they aren't - you'll be too busy enjoying yourself to care.

Up to now I hadn't been blown away by the Saints Row franchise. With this latest instalment, Volition have invigorated the series and carved out a clear place for it in the open-world genre. Saints Row: The Third comes highly recommended.

The third game in the Saints Row series sees the 3rd Street Saints falling from grace and having to rebuild their reputation in a new city. Steelport isn't the biggest or most distinguished sandbox you'll ever terrorise, and graphically SR3 is inferior even to the ageing GTA4, but the unashamedly unrealistic gameplay more than compensates for these shortcomings. There are a good number of reasons to dislike this series, but the latest instalment has got the goods where it counts. It has the one ingredient that many would say Rockstar have left out of their recent releases: it's fun.