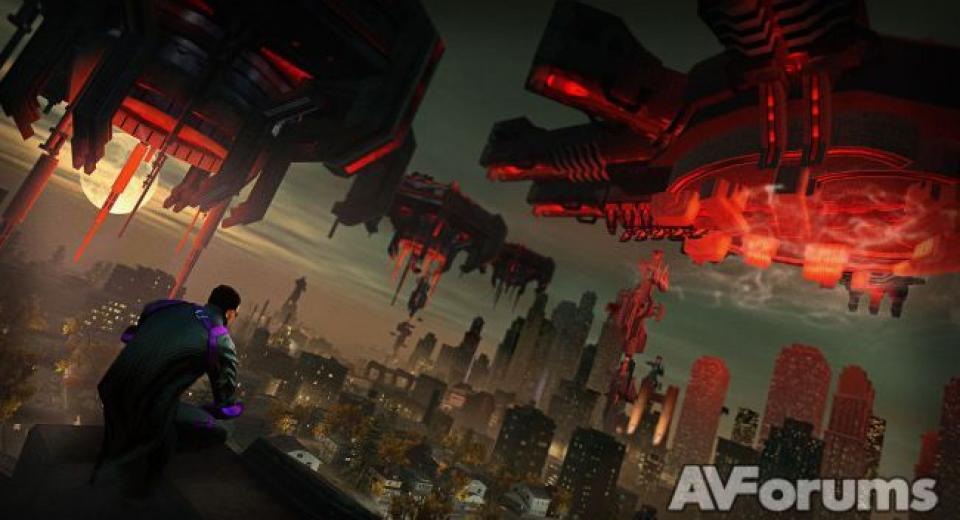 For the second time this year I find myself reviewing a game that opens with an homage to the helicopter scene in Predator, complete once again with Little Richard belting out Long Tall Sally.


Similarities with Far Cry 3: Blood Dragon end there, but it sets the scene for the string of tributes to games, TV and movies that characterises Saints Row IV’s campaign. If SR4 nodded to any more influences, its oversized Johnny Gat head would fall off. Volition have long sought to distinguish themselves from Grand Theft Auto by abandoning realism in favour a wacky off-the-wall approach, epitomised by the infamous ‘Penetrator’ - a vicious dildo / baseball bat combo. SR4 makes this look normal by comparison. You take the role of The Boss once again, now President of the USA. All hell breaks loose when earth is attacked by a race of aliens called The Zin, whose surprisingly bland leader Zinyak transports The Saints to a Matrix-esque simulation where each is forced to live in his or her own personal nightmare.

For the player-character, this takes the form of a wholesome 50s sitcom entitled “Leave it to the Saints”. You’re helped to escape by The Saints’ resident techie Kinzie and none other than Platoon’s Keith David (your Vice President, natch), who’ve stolen a Zin ship. It’s from here the game proper kicks off. Zinyak has created a simulated version of Steelport, and it's your job to take it down. I honestly couldn’t tell you why destroying the simulation is necessary at all, but it’s fair to say Volition intend for us to accept it and move on. All this is to justify the new superhero mechanics introduced in SR4. You’ll quickly unlock a super jump and sprint, which enable you to dash and bounce around the city faster than any vehicle can take you. As you’d expect, upgrades can be purchased (using the simulated currency ‘cache’), and by halfway through the game you’ll be able to jump higher than most buildings, run up walls and sprint indefinitely. A diverse range of superpowers are unlocked as the game progresses, giving the action a distinctly inFamous / Protoype feel. There’s the blast, which you can use to freeze, fry or mind-control enemies. Then there's the stomp, which creates a seismic wave and knocks everyone nearby off their feet. But the best of the bunch is telekinesis, which enables you to throw objects and enemies around with your mind (a load of fun).

In addition, there are a range of alien weapons to play with. The Dubstep gun, which causes all in its path to break into dance, is the one we all saw in the build up to release - but the most enjoyable to use is the hugely overpowered Singularity Gun, which pulls enemies into a black hole.

In order to bring Zinyak down, you need to free the rest of the Saints from the simulations they’ve been trapped in. Each of these is wildly different from the last and some are more successful than others. Depending on the setting, you may arbitrarily have your powers taken from you, which can be frustrating after you’ve become accustomed to leaping tall buildings in a single bound and so on. The problem is that substantial sections of gameplay have been built in service of a fairly straightforward gag. Anyone who’s played Retro City Rampage will know why that’s a bad idea.

The mission in which you rescue Asha is great example of SR4 at its best and worst. On the one hand, it’s a finely observed parody of stealth games, particularly Metal Gear Solid. You’re forced to shoot out lights, and at one point to creep around in a box. But on the other hand, it has all the design flaws that you’d expect from an amateurish attempt at stealth and was a pain to play through. Similarly, a later rescue transforms the game into a side-scrolling beat 'em up. Again, the references are smart and frequently laugh out loud funny, but after a while the gameplay becomes tedious and you find yourself hankering to get back into the open world of simulated Steelport. And to be fair, it is in Steelport that you’ll spend most of your time. As with SR3, many of the early missions serve to do little more than establish the mechanics of the activities available throughout the game. Some of the activities are carried forward directly from SR3. The ragdoll fun of Insurance Fraud returns, in which you’ll throw yourself into as many oncoming vehicles as possible within a time limit; as does the insightfully titled Tank Mayhem in which you cause mayhem in a tank.

A handful of new activities are introduced that make use of the new superpowers. Most notable is ‘Mind Over Murder’, which requires you to use your telekinesis to launch people, cars and Genki heads through hovering hoops. It’s good fun and provides a real challenge later on, but lacks the charm and humour of the “Super Ethical Reality Climax” Genki show from SR3.

It’s in the charm stakes that SR4 stumbles throughout. It’s still funny - the superb Robin Atkin Downes as the cockney ‘male voice 3’ is once again a show stealer - but the heart of SR3’s humour was in its bizarre cast of characters. In SR4 the comedy is rooted in the environments and situations, which works in flashes but is unable to carry the entirety of the comparatively modest 15 hour campaign.
Volition have consistently gone out of their way to find shortcuts to the usual open world frustrations. In SR3, you could write a car off and find another unmarked in your garage, leave your penthouse apartment by stepping off the balcony, or play through a number of missions with infinite ammo. In SR4 they’ve pushed this to its limit, to the detriment of the experience. There’s no question that the superpowers add a new dimension, but they undermine any connection the player has with the city of Steelport. And that’s a problem because the city wasn’t that memorable to begin with. The powers are fun but quickly render vehicles redundant. Unless required by a mission, I don’t think I got in a car, boat or plane after the first few hours. It’s quicker and easier to leap and sprint around the city. But you don’t get to know a place when you spend most of the time speeding through it in a blur, or floating above it.

I’m clearly not alone in making the choice to abandon the vehicles. Volition have gone as far as to keep the ‘radio’ playing all the time: an acknowledgement that you’ll never hear the audio content if it’s only available when you’re behind a wheel. The elephant in the room is that this is a game that started as DLC for its predecessor, and I played through with SR3 in mind. No-one could accuse Volition of putting out anything less than a full product here, but overall the balance of quality is in SR3’s favour. It’s worth noting as well that the graphical issues remain - frequent screen tearing, a terrible draw distance, etc - and although to some extent they're incorporated into the gameworld (deliberately emphasised and explained away as 'glitches in the simulation'), it reinforces the sense that things haven’t moved on since the previous installment.

Despite all the issues, any fan of madcap open world games - or irreverence more generally - will get a kick out of the destruction on offer. But ultimately despite the superhuman leaps, SR4 never quite reaches the highs of The Third.

Building on the success of Saints Row: The Third, Volition go all-out in pursuit of the most over-the-top open world game to date. Set in a Matrix-like simulation and featuring aliens and superpowers, Saints Row IV is an enjoyable romp. But the changes strip Steelport of the little character it had, and the missions are altogether less memorable than those of its predecessor.