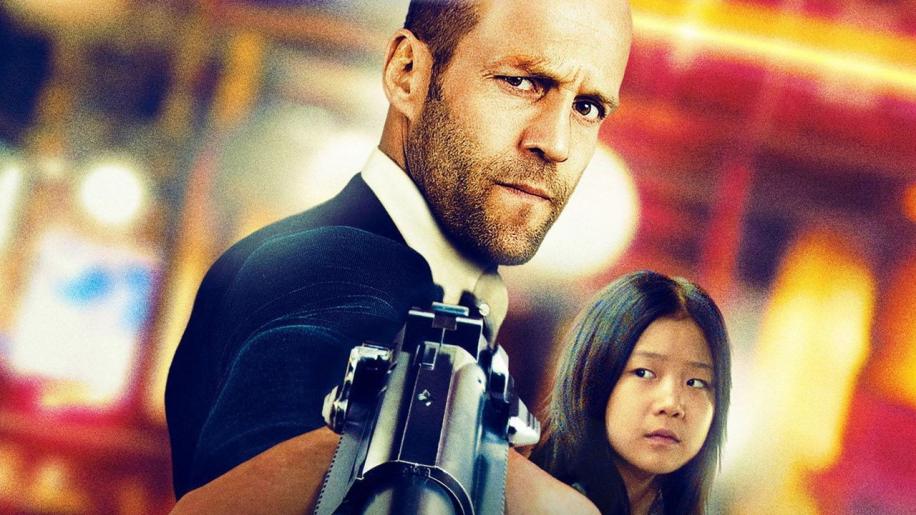 Jason Statham has earned himself a considerable reputation as the definitive post-Millennium action star. Over the last twelve years he has done more mainstream straight actioners than any other actor that I can think of, successfully leaving his Guy Ritchie cockney wheeler-dealer days behind him and concentrating on what he has the most success with: diving through the air whilst shooting two guns, and kicking people in the head.

It’s been both a blessing and a curse. On the one hand, you know what to expect from the majority of his films – you see Statham holding a gun and looking mean on the front cover and you know what you’re going to get. On the other hand, he is most definitely typecast, pigeon-holed into action-roles where the only variety we get is whether or not he’s going to put on a slightly dodgy American accent.

Honestly, he might as well have just made a dozen Transporter movies; his films and the characters he plays therein are almost that interchangeable (indeed, I’m a little bit worried about him taking on the Parker mantle from Mel Gibson in Payback and Lee Marvin in Point Blank, lest they chose to dumb down the role for him), but there are still exceptions to the rule in his filmography: both good and bad.

Occasionally he misses the mark – even with his pure action flicks – certainly dropping the ball slightly with both his unpleasantly blunt remake of The Mechanic and his could-have-been-great pairing-up with DeNiro for the abortive misfire that was Killer Elite. But on the flipside we get films like Blitz which, whilst not exceptional, are different enough to stand out as more than just derivative action films; stand out from his burgeoning filmography. And then there’s Crank, which – at least in terms of the first movie – was perhaps his best entry into this genre, a frenetic live-action Grand Theft Auto game, complete with all the wacky humour commensurate with the earlier entries in the game series. In fact, it was so funny that you could easily argue that it doesn’t even fit into the same shelf as the rest of his action vehicles. However these films are the exception to the rule in his relatively predictable line of work.

Still, even though these gems are few and far between, Statham’s got a track record you can generally rely on – you may not be queuing up to see his latest actioner at the cinema, but you’d likely be quite satisfied with spending a night in with one of them on Blu-ray, inviting over a few mates and getting them to bring some beer. So when I heard about Safe; when I saw the poster, with an angry-looking Statham pointing a gun right at me, I thought “meh, I’ll just wait for it to come out on Blu-ray”. Even the trailer, which had all the requisite shooting and kicking people, didn’t spark up any genuine interest in me – it looked like pretty-much every other movie he’d done in the genre, for better or for worse.

Preview reviews got my attention, however, giving the film comparatively high 7s or even 8s, and praising it as a surprisingly enjoyable actioner – perhaps his best straight actioner yet. You know what? They’re right.

Mei is a young Chinese girl with a remarkable memory for numbers. When her genius skills catch the attention of the local mafia she gets shipped over to New York to work for the Triads in Chinatown, keeping an eye on their profit margins to see which businesses aren’t making enough money. One day she is given an important number to memorise – her bosses using her like a human datastick to transfer this information from location to location – but when the Russian mafia ambush her entourage with a view to getting the information for themselves, she is forced to escape and go on the run.

With both factions on her tail, and a City-full of corrupt cops scouring every avenue to find her, she finds unlikely help in the form of homeless bum Luke Wright, a washed-out drunk who is one step away from committing suicide and who sees Mei as his one last chance at redemption; at doing something worthy.

The key to what makes Safe work so well is the brilliant setup. Writer/Director Boaz Yakin may have as many bad marks against his name as he does decent productions (he wrote the dark and competent original Punisher movie, but he also wrote the Clint Eastwood / Charlie Sheen actioner The Rookie; he directed the Denzel Washington vehicle Remember the Titans, but he also wrote Prince of Persia: Sands of Time, a movie for which I didn’t even realise there was a script) but he gets the ingredients just right here, at least for the first half of the movie, taking his time and establishing the backstories to the lead characters – Mei and Luke – and offering up a good twenty minutes of background before the two even meet.

Sparks of imaginative style are also thrown into the mix – from Statham’s unusually wise-crack-ridden dialogue (which would not have felt out of place with a nineties Die Hard Willis spouting them) to some exceptionally clever uses of the camera, in ways that are basically the closest that he’s come to a Crank movie since his last Crank movie (I’m talking about the in-car shooting angle as they’re being chased). There are some genuinely funny moments, and some bits where it actually looks like Statham’s trying to act (how many times have you seen him shed a tear), which is all the more unusual with one of his action efforts.

The script may not be all that original, throwing in as many action-thriller clichés as you could possibly think of (from the revenge theme to the protecting-an-innocent thread; from the one-man-army concept to the ‘man with a black ops past’ backdrop), but the director keeps throwing you one strong setpiece after another, bombarding you with myriad ever-competent action sequences to easily maintain your focus and interest, and further spicing things up with a few nice MMA moves, some nifty gunplay and a couple of ideas stolen straight out of a Bourne movie.

From the subway fight to the hotel siege; from the unexpected, innovative cop-team-up assault to the restaurant ambush, each and every setpiece demands your attention, and you give it happily. Statham is a master of this kind of thing, and it’s nice to see him doing what he does best in a film that makes the most of its genre restrictions and remembers to offer up fun and frivolity in amidst the gritty settings and punchy delivery.

If anything, Safe only falls down in its promise of more than it eventually delivers. The unexpectedly brilliant premise and well-established character backstories only set it up for a fall, and, sure enough, the film soon devolves into Statham just kicking people in the face and shooting everybody. It’s what fans want, but unfortunately the story quickly gets left behind as soon as the action quotient ramps up for what looks to be an epic conclusion. And, to be honest, the film also drops the ball with the way in which it rounds things off. Sure, they manage to do a hilarious and unusual twist for the final fight – I really didn’t see that coming, and kudos for not falling into that particular action-thriller end-of-level-baddie pitfall – but, afterwards, it’s all done and dusted in a marginally unsatisfactory fashion which feels like either the writers didn’t know how to resolve all the numerous story strands properly, or simply wanted to leave things open for a sequel. Which, funnily enough, wouldn’t be such a bad thing.

At the end of the day this is definitely one of Statham’s better action entries, not quite breaking out into being a truly memorable action film, but certainly standing out from the crowd – and standing out in his recent filmography. It’s a good, solid action film that delivers reasonably rounded characters, a superior set-up, and numerous excellent action set-pieces. It’s the kind of thing that Willis would have made, back in the day (it’s not far off being a Die Hard script), and, quite honestly, you won’t regret taking the time out to catch this at the flicks.

Safe is everything that critics and audiences have been surprised about. It may have been buried by the Hulk Smash! of Avengers, and it may soon pale into insignificance when put up against the brutal Indonesian action-movie-of-the-year, The Raid, but it’s still a remarkably well set-up straight actioner, that puts more time and effort than you would normally expect from this kind of film into establishing a solid premise and crafting reasonably rounded characters to populate the story. Jason Statham proves that he’s still the most reliable post-Millennium action star, and though he doesn’t break too far from the usual familiar path with this entry, it still makes for a definite step up after his last couple of outings. In fact, despite my love for action movies, Statham’s films have been so middling of late that I would have happily waited for its home release to check out this latest entry. Thankfully I didn’t because it’s more than enough fun to justify a night out at the flicks.