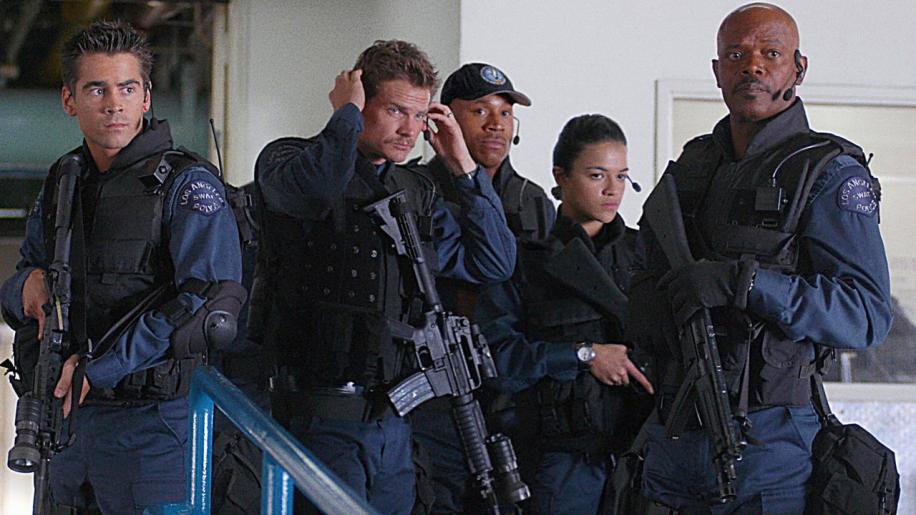 Framed at 2.40:1 anamorphic widescreen and sourced from a high definition master, the image is very nearly reference quality.

The detail and definition on offer are impressive with everything looking sharp and crisp. Close ups contain copious amounts of fine details with lines and pores standing out on faces. Even wide angled shots manage to hold onto detail with only a few looking soft. Colours are rich and well saturated with no signs of bloom or bleeding and the crisp blues and reds look natural and well defined. Black levels are spot on with plenty of shadow details on show for all to see.

The only slight let downs were signs of edge enhancement here and there as well as a few instances of compression artefacts in the fast moving moments. Nothing hugely distracting but you will notice them now and again. This is a pity as the picture is very nearly reference quality, but apart from these small niggles it still looks pristine and detailed.

When your heroes play with guns for a living, the bad guy is a French mobster and the opening is based on a real bank robbery gone wrong, you just know that this Dolby Digital (448kbps) soundtrack will be aggressive. In fact the soundtrack is the only part of this presentation that doesn't disappoint.

The sound mix is aggressive right from the word go with imaginative use made with the sound field. The camera pans are lifted straight out of a music video and as the camera pans so does the sound field, with gunshots moving throughout to create a convincing 360 degree mix.

Each gun shot is based on the real weapon being used, but as this is Hollywood they are far from realistic. But don't let that put you off, each gun shot is underpinned with deep thumping bass, you feel each bullet as they leave the barrel.

With so much going on dialogue remains intelligible and easy to follow and the score is never drowned out when all hell breaks loose. Surrounds are used through out to great effect and some LFE effects that will shake those walls to great effect. This is a top drawer action soundtrack; it's just a pity they had to let things down on screen.

This single disc presentation has enough here to put some so called two disc sets to shame. Kicking things off are two audio commentaries, the first with actors Josh Charles, Samuel L. Jackson, Brian Van Holt, Michelle Rodriquez and LL Cool J, along with director Clark Johnson. The second features the writers David McKenna, David Ayer, Ron Mita and Jim McClain. Both are interesting and informative with plenty of humour added for good effect. You will forgive me however from not actually sitting through the entire film three times to listen in great detail, it is Christmas time after all, I don't think I deserve that punishment.

Next up are a number of featurettes on the making of the movie. These cover different aspects of the film making process. My favourite was the sound effects demonstration and a closer look at the guns used. The main Making of feature is not your normal electronic press kit; we actually get plenty of behind the scenes information and clips.

Extended and deleted scenes are just that, offering eight out takes including a longer opening. The Gag reel is funny and distracting enough followed up by the 6th Street Bridge feature running at 5 minutes.

Rounding off the extras are a look at the original TV series from the 70's and trailers for Bad Boys II, TV Action Favorites, Once Upon a Time in Mexico, Radio, Underworld and Big Fish (which looks very interesting, but remember what I said about trailers!).Great picture and sound quality along with some excellent extras. The film is good for 40 minutes or so, but the last act is just absurd. One word here, Forgettable!