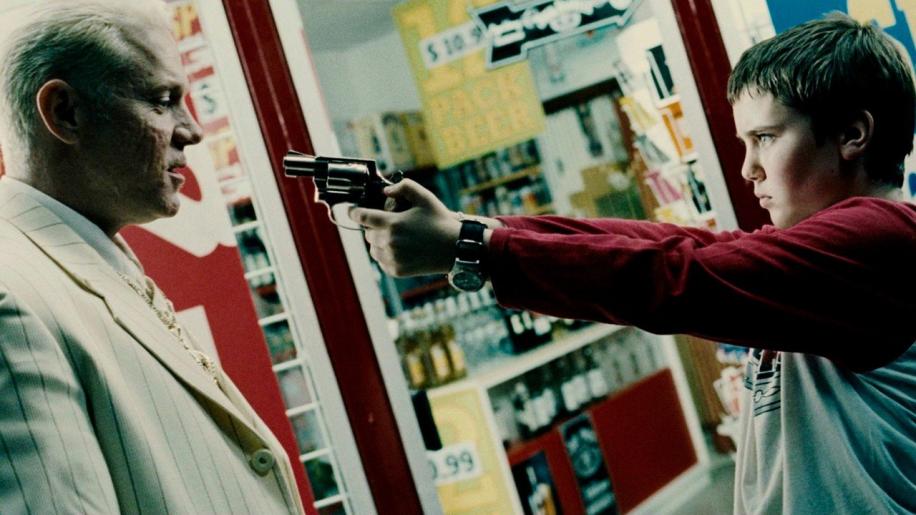 The disc has been given a theatrically correct 2.35:1 aspect picture that has been anamorphically enhanced for widescreen TVs and because of its stylised nature proved a challenge to review. The pallet is all brown and blue and, at times, with harsh lighting, this is all represented faithfully; there is no fluctuation or bleeding or wash. Brightness and contrast are set to give some very rewarding blacks, deep and impenetrable, again faithfully represented. The problem comes with the grain, it is all rather grainy, but this was completely intentional, and as such must be considered a faithful reproduction of the intended nature, though it does make the detail tend toward the soft in places; its never bad but its hardly pin sharp either. Digitally there were no compression problems and edge enhancement was minimal, I also spotted no print damage, so apart from the intentional grain this was a pristine print. Impressive.

There are no less than three English sound tracks to choose from, Dolby Digital 5.1, Dolby Digital 2.0 surround and DTS 6.1 ES. I bounced between the Dolby 5.1 and the DTS throughout the film to try and discern the differences and it was really hard, just when I thought the DTS had it with slightly wider separation and bassier edge the Dolby would come right back with a slightly leaner but punchier edge; so whilst there are subtle differences between the two tracks I must leave it up to individual taste as to which to go for as it is both tracks are quite excellent. There is plenty of surround action, especially with the gun shots and ambient sounds filling the speakers and placing you in the centre of the stage. There is a full range with plenty of bass to hold it all together the sub having a great time of it. Separation was good and directionality well steered to give a full on surround experience when called upon, quieter moments relied purely on the front three. Dialogue was always clear with good tone and never drowned out by the action or score. Very impressive. The Dolby 2.0 surround was no slouch either though it obviously lacks the separation of it's big brother.

First up we have a feature commentary with writer/director Wayne Kramer. It is a pretty engaging talk, fairly scene specific but he is happy to meander about making it all sound interesting. He hardly pauses for breath, always being able to find something to say about everything, be it casting choices, locations, sets, camera movements and other technical aspects, best of all it doesn't appear scripted. For a one man show this is a good as it gets.

Next up is Running Scared: Through the Looking Glass the making of featurette; why 'through the looking glass'? Well Kramer likens his film to a perverse retelling of the Alice fairytale. There are plenty of interviews with the principle cast and crew and lots of behind the scenes footage with little padding from the film. It's not too bad, a bit back slapping in places, but fair information is told, though really it's a bit too short at under twenty minutes to go into any real depth, looks good though at anamorphic widescreen 1.78:1 though.

Next up are two film to storyboard comparisons for the opening hotel shootout and the ice rink shootout, shows just how close Kramer stuck to his original drawings, but I never find these features that thrilling.

The DVD-Rom content allows you to watch the film while reading the screen play as well as various New Line links, but you have to install Interactual software to do so.

There is also an anamorphic widescreen trailer for the film.

Finally, and I know this isn't really an extra per sa, there is a graphic novel - comic to you and me- for the ice rink shootout scene, it's reasonably explicit and manages to capture a decent mood, as profane as the film itself too.

Running Scared is brutal, nihilistic, violent and uncompromising; it is also absurd, daft and has Paul Walker in it. A bit like an oxymoron Running Scared does work, at least on some levels, broadly it manages to entertain even if that entertainment is dirty. As a DVD the package is pretty good, an excellent picture and sound are backed up by a reasonable selection of extras, even if they are a little short.