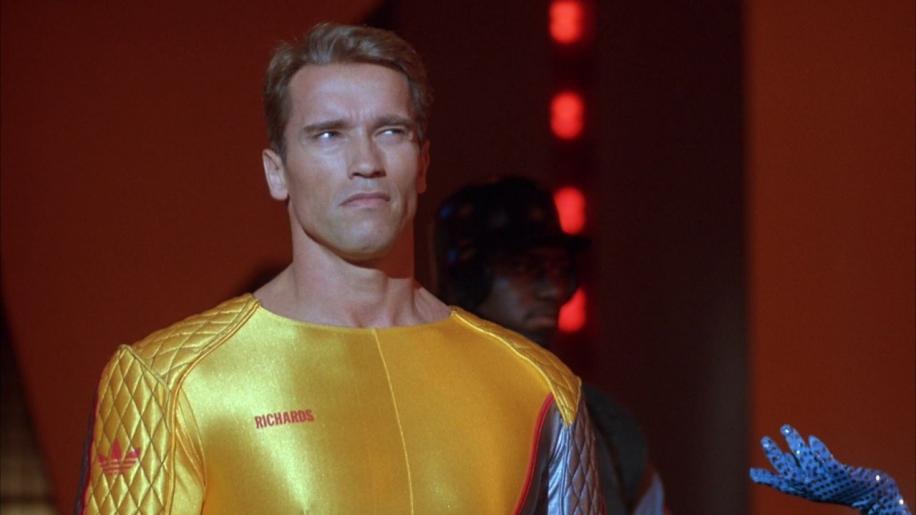 The new special edition has both a full frame version and a new remastered Anamorphic 1.85:1 version of the movie one per disc. I watched the Anamorphic version in its entirety as well as checking the full frame edition.

The widescreen version is by far the best on offer giving this movie its best quality release yet. Struck from what looks like a new print of the film the quality is excellent for a 17 year old film with the bright primary colours of the Running Man game show and the various game zones showing no sign of colour bleed and very little dirt or print noise. The decision to split the full frame version onto another disc is a very wise one, with only the main movie and a few extras, (see below), on the first disk more space was free to allocate to the movie itself with the bit rate averaging around 7mb throughout the movie. Very little mpeg noise is evident even during scenes filled with smoke, dust and explosions. Edge enhancement is also thankfully absent. Wow, both Dolby digital 6.1 and DTS tracks are available for the widescreen version of the movie. Originally released in Dolby Stereo, the sound has undergone a total remix for this release. The Dolby Digital track makes good use of the new split surround tracks with excellent ambient effects in scenes such as the runners first encounter with “Sub Zero” in the ice rink zone. The LFE channel also gets a bit of a workout with explosions and the low frequency “whoop” of chopper blades. As touched upon above, the new release sets out to reintroduce us to the movie in context with the twin aspects of “Reality TV” taken to extremes and the current trend toward the reduction in civil liberties in the fight against terror. Nowhere is this clearer than in the extras evident here.

On the first (widescreen) disc are options for the two commentary tracks, one with director Paul Michael Glaser and producer Tim Zimmermann and the other with executive producer Rob Cohen. In addition to this you will find the first of two relevant documentaries, “Lockdown On Main Street”. This is quite a high quality documentary showing the sheer loss of rights the US has seen following the terrorist attacks on September 11th 2001. Various experts talk about the US Patriot act and its successors leaving you with the feeling that a running man type future may not be so unlikely after all.

Over on the full screen edition you'll find “Game Theory”, a documentary that offsets the movie against the current vogue of “Reality TV”, investigating the reasons behind the popularity of this genre with both the public and the studios that produce it. Surprisingly, this is also an intelligently produced and given the immanent arrival of Big Brother 5 here in the UK as I write this, a timely piece. Frank discussions with the producers and participants of shows such as “Survivor” also add alternate and insider viewpoints into how “real” these shows actually are. As to whether we could progress from shows such as “Fear Factor” to the nightmarish but logical progression of “The Running Man”, time will tell.

This DVD also contains the special editions only movie trailer which is, disappointingly, full screen and shows quite a bit of print damage. Lastly there is a “meet the stalkers” interactive feature which is comprised of clips of the stalkers and host/creator of “The Running Man” Damon Killian in action, their “biographies” and information on their weaponry all wrapped up in a “game show” type wrapper, ugh. An excellent edition of a movie that, in modern context, appears darkly prophetic let down only by a cheesy extra and lack of a decent widescreen trailer.