You do what you have to do, I’ll do what I have to do. Whatever happens, happens. 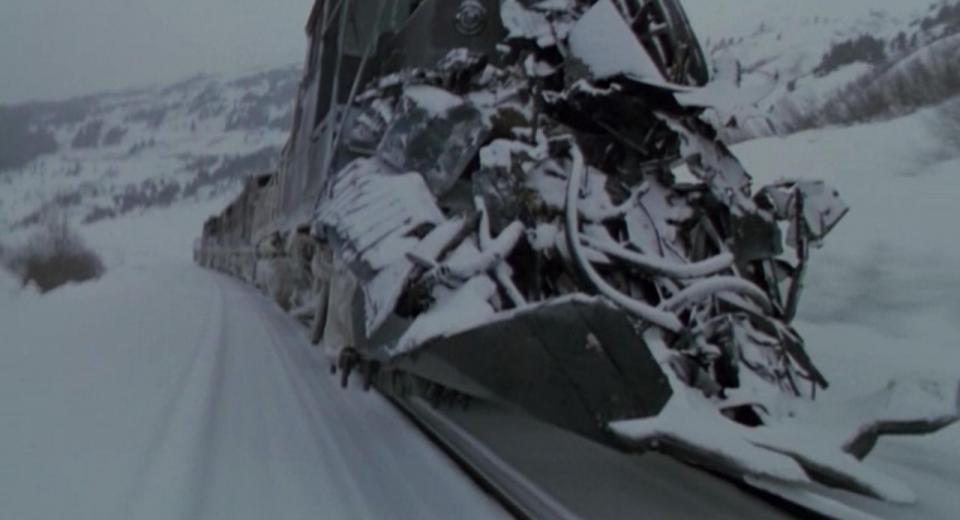 Runaway Train thunders onto Region B-locked UK Blu-ray courtesy of the ever-reliable Arrow Video, complete with a 1080p/AVC High Definition video presentation in the movie’s original theatrical aspect ratio of 1.85:1 widescreen. Certainly, given the filming conditions, myriad combined effects, budget, style and age of the piece, this is an impressive rendition of the feature – undoubtedly better than it has ever looked before and probably the best it ever will look. First, the downside: there are several shots, frames and even sequences which look pretty poor. The handheld photography, and a few scenes where the image appears to have been intentionally zoomed in on (c.f. the fat controller), occasionally lead to unpredictable noise levels, and the shadow detail is frequently downgraded to pretty poor levels during the darker sequences (c.f. the sewer run). It’s perhaps a smidge worse than I would have expected although, thankfully, these poorer shots are the exception.

Detail is otherwise extremely impressive; the image boasting a warm depth and a fantastic sheen of fine grain which lends the feature a lovely filmic look, but, beneath the organic grain structure there’s a wonderful texturing to the image, with strong facial close-ups and background detail. The broader shots often look stylised in a specific way – and therefore could be described as worse – but I think it only lends itself towards the gritty design of the film and, unlike the loss of shadow detail and sporadic excess noise, these fit in perfectly with the tone of the piece. There are also some wonderful stunt shots, and unusual camera angles – like the shot attached to the front of the train – which also boast a stunning level of detail; during these far more prevalent moments you will undoubtedly feel that you never have expected the film to look this good. On the whole, it’s a very good video presentation. There are enough flaws to prevent it from being demo or reference quality, but there are enough positives to make it a highly praiseworthy transfer nonetheless. On the aural front there’s only one option – an English LPCM 2.0 mix. Normally Arrow go for the High Definition six-speaker variant as an alternative, and the results can be either hit (Dressed to Kill) or miss (King of New York), but, whilst there’s no revamped track on offer at all here, the stereo mix is still very pleasing indeed, promoting the film in a natural-sounding way, clean and crisp and with no damage or distortions. Dialogue comes across clearly and coherently throughout. Effects are myriad, and whilst limited in design, do still manage to craft a heady atmosphere for certain key sequences – the prison riots, the boxing match, the escape, the helicopter chase and basically anything involving ‘The Beast’. The score, too, gets excellent coverage, both with its slightly intrusive synth-driven aspects and the less dated haunting orchestral elements. Bass is well catered for, both for the score and, more especially, the effects, some of which benefit from some very decent sub-action. Again, whilst no demo or reference quality by any means, this is a very good aural presentation that should please any fans of the feature. Arrow once again doesn’t disappoint on the extras front, driven by a string of quality, comprehensive newly-recorded HD Interviews from all the major players.

Running on Empty is a quarter-hour interview with Director Andrei Konchalovsky talking about how much freedom the film studio, Cannon, gave the filmmakers – carte blanche to do what they liked, so long as they put it in within budget; how he came to the US through his friendship with Jon Voight, their work together on the movie; the way the characters were adapted, and the performances put in by the cast they eventually settled on (the trivia into Jodie Foster’s original hope to take the Rebecca De Mornay is particularly interesting, as well as Tom Cruise’s trip to the set to visit De Mornay). It’s a shame, though, that there isn’t any time spent discussing Kurosawa’s input, but Konchalovsky fondly reflects upon many other aspects of the production and this is well worth a watch.

From Thespian to Fugitive spends a whopping 38 minutes with Jon Voight, who was Oscar nominated for his role here. It’s easily the highlight of the disc, and Voight is on top form, reflecting honestly and passionately about his work, from his improvisations and additions to key points in the script to his character design through his own research and experiences. He offers up anecdotes on the production, plenty of praise for the director, and also for the three against-type lead performances. He discusses the cinematography with Bond filmmaker Alan Hume and the excellent stunts and stuntwork done by his double. He chats about his favourite moment – not just from the film, but his favourite acting scene of all time – and about the fact that the film was both ruined by poorly-handled distribution and snubbed by the Oscars when it came to actually full awards. If you enjoyed the movie, don’t miss a minute of this excellent addition.

Sweet and Savage offers up just over a quarter of an hour with Eric Roberts – who was also nominated – discussing his role, and the production. As natural as Voight’s offering, Roberts reflects on his best work, and talks about how driven Voight and the director were, the occasional confrontations on set, the reasoning behind his odd ‘country’ accent (which was his suggestion) and the poor distribution of the film – it seems everybody thought they did a terrible job at promoting it!

The Calm Before the Chaos rounds out the selection with an 18-minute Interview with Kyle T. Heffner, who chats about some of his scenes, his memories of the production – arguably the highlight of his career.

Original Trailer with Optional Commentary by Rod Lurie (filmmaker and Trailers from Hell Commentator) who offers a quick-snapfire background into the production, touching on all the keynotes that you’re likely to be able to glean from imdb. It’s a nice little addition, and, of course, you can also just watch the Original Theatrical Trailer by itself.

The package is rounded off by another quality Arrow Booklet, packed to the brim with articles and production stills. Based on an original story by Akira 'Seven Samurai' Kurosawa, nominated for three Academy Awards, including a Best Actor nod for former Oscar winner Jon 'Midnight Cowboy' Voight, and probably one of the best train-based action thrillers of all time, Andrei Konchalovsky's 1985 feature will likely seem familiar even to those who are seeing it for the first time, mostly because it was so woefully ripped off in the late Tony Scott's considerably more mundane 2010 flick Unstoppable.

Don't just dismiss it because of its age, or because you've never heard of it – you’ll be missing out on a gritty, atypical, character-driven prison break / out-of-control train thriller which is also something of an almost-lost gem.

On Region B-locked UK Blu-ray Arrow have once again done a great job in bringing another cult classic to life in HD, promoting the best video and audio we are ever likely to get for the movie, as well as a whole host of thoroughly engaging extras. Fans should consider this a must-have purchase; newcomers who are interested in the subject-matter should definitely give it a look.