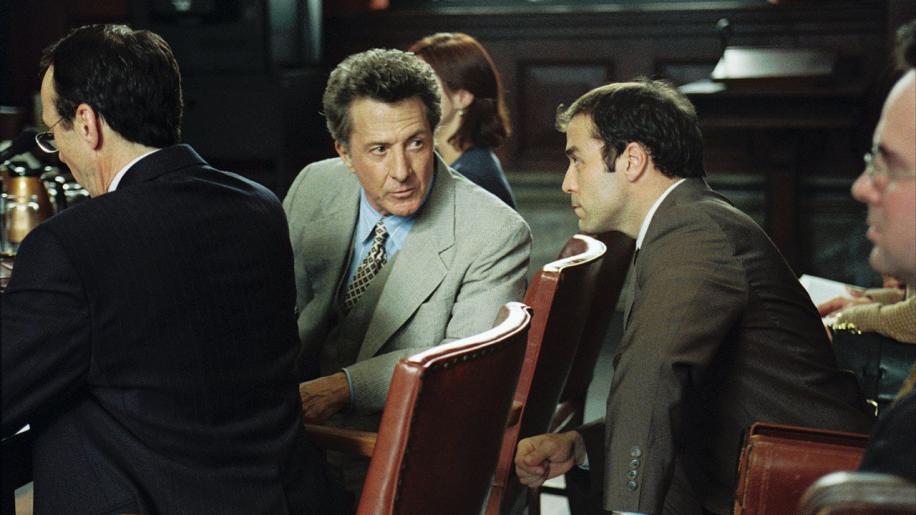 Picture quality is somewhat substandard for a new release of a new movie. Edge enhancement rears it's ugly head almost immediately with the opening titles being awash with halos. The establishing shots of New Orleans are faded and lack depth, and again have EE and pixelisation of spectral highlights. Things do improve, and the digital artefacts quieten down later on. The court scenes exhibit warm tones well and hold decent amounts of shadow detail. Night time scenes have oppressive black levels, which crush the shadow detail, forcing me to increase brightness to see what was going on, thus killing the contrast range. Colour balance is good, and as I am finding increasingly on review DVDs, towards the warm end of the spectrum, but with natural skin tones. I have tended to extenuate the negative about the picture which, overall, is not awful but is certainly below par for a modern major studio release.

While doing little wrong the Dolby Digital 5.1 soundtrack is also a rather bland offering. Courtroom dramas rarely call for an expansive or dramatic soundtrack so I suppose I shouldn't be disappointed. What is on offer is clearly focussed dialogue and a moderately diverting score from the rear soundstage. There is little bass action and not much happening off screen so you better have a good centre channel speaker because that's where everything goes.

Director Gary Fleder provides the feature commentary and does a sterling job. He avoids the common pitfalls of repetition with the making of featurettes. His views are thoughtful and interesting giving the listener added insight to the process of movie making, along with Fleder's intentions and motivations. There is a making of feature divided into several smaller bite sized chunks covering the acting, directing, cinematography and editing. The hidden gem is a behind the scenes 20 minute feature with Hackman and Hoffman as they nervously work there way through one of the movies most dramatic and pivotal scenes, the first face to face meeting of Fitch and Rohr. Watching these Hollywood heavyweights working is a sheer joy and I would rather watch this than the standard insipid ass kissing that most featurettes provide. Hidden at the bottom of the extras list is a trailer for the forthcoming Tony Scott movie Man On Fire with Denzel Washington and my current favourite actress Dakota Fanning (and no I am not a weirdo I just think she is brilliant).

Another Grisham novel gets a big screen outing but like those that have gone before it is a rather conventional and predictable affair which is merely adequate in all respects. It is hard to be offended by what is on offer, just hard to be excited by it also. Rent or borrow would be my advice.