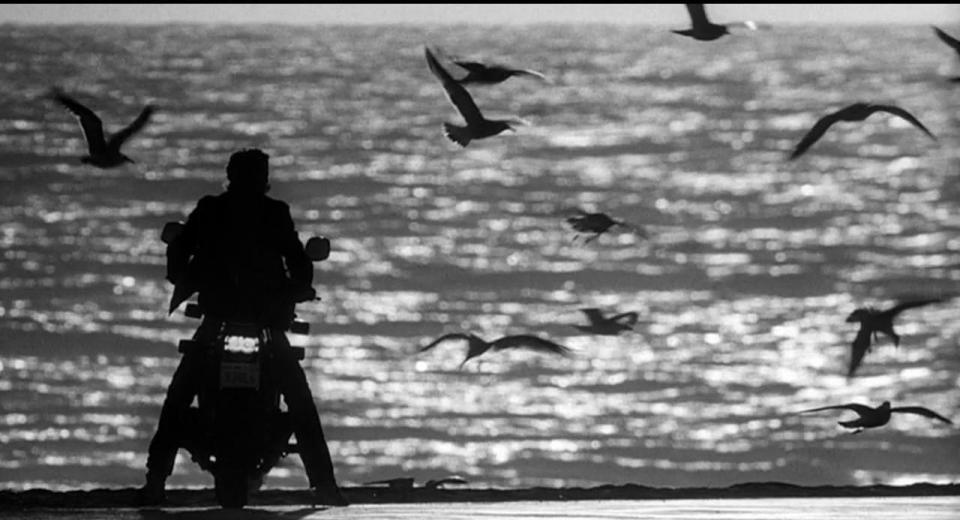 Rumble Fish hits UK Region B-locked Blu-ray as part of the Masters of Cinema series from Eureka, however the brand new remastered HD transfer is actually officially licensed from Universal (I’m assuming the US will eventually get a Region-A friendly version of their own with the same video). Presented in the movie’s original theatrical aspect ratio of 1.85:1 widescreen, the film seldom shows its thirty year age, undoubtedly benefiting from the almost ageless black and white cinematography.

Unfortunately the transfer ‘borrowed’ from Universal is far from perfect, and has a fair amount of prevalent issues that you really don’t want in a decent remaster job – from edge enhancement to DNR softening – but I have to say that the end result still does not succeed in pulling you out of the movie, and will only really frustrate those with bigger-end TVs (50”+). Many scenes boast a surprising amount of detail – especially when it comes to the facial shots – but there is a pastiness to some of the shots that smacks of excessive DNR application, and likewise the broader sequences boast some of the most visible sharpening. The fact that there’s almost no grain will be of immediate cause for concern amidst fans, and whilst the contrast is good, some of the tones absorb lower-end detail, with blacks threatening to engulf the picture.

As stated, you’d have to be very distracted to be more focussed on the issues with the video presentation than enjoying the style and mood of the film itself, but those with bigger TVs and an eye for defects will probably fall into that category – those who love the movie and are just impressed that it still easily looks better than it ever has done before will merely dismiss the problems and very happily live with what we get. Flawed but not debilitatingly so. On the aural front, we get not one, but two remastered variations on the soundtrack – presented in both remixed DTS-HD Master Audio 5.1 and the film’s original DTS-HD Master Audio 2.0 Stereo flavour. The original track is – hands down – the best option. Whilst the remix isn’t quite of the terrible quality that accompanied Arrow’s King of New York release a month back, it does have some of the same problems: that echoey tremor and lightness around the edges (making some of the score more tinny than it should be) which is an issue on many of these faux remixes. Sure, the benefit is better separation, with effects and dialogue getting specific priority across the surrounds, but with the score sounding worse, and the dialogue sounding quite hollow, the Original track is definitely the preferred choice.

The Original Stereo track benefits from a wonderful depth and LFE undercurrent; the score having more of a drive to it, and the percussive elements having better impact. Dialogue is less echoey, and effects are still well-observed, so there’s very little loss in just choosing this option. Indeed, I think it makes for a considerably better experience. The film comes with optional English subtitles as well as a music-only track (in DTS-HD Master Audio 2.0 Stereo) which further highlights the exceptional score. Although the majority of extras – if not all of them – were present on the Special Edition DVD release a decade ago, it’s nice that they’ve at least been included here (I’m looking at you, bare bones edition of Chinatown) and they make for a welcome accompaniment, adding pretty-much all there needs to be said about the backstory of the production, and offering a whole host of behind the scenes glimpses and new-and-old interview snippets. The only thing that’s missing is the music video but we do also get a Music and Effects Track to make up for this.

Audio Commentary with Director Francis Ford Coppola is the first port of call in the extras department; a fantastic accompaniment that offers plenty of welcome insight into the production. He warmly discusses the personal significance, the stylistic choices, and the sometimes simple methods by which they implemented them. He is also fairly honest about the film’s Box Office failure, and the fairly adventurous gamble he was taking which simply did not pay off, at the time. It’s a great track, with both technical depth and interesting revelations into the backstory. Well worth checking out, whether you’re a film school student or just a fan of the cult classic itself.

On Location in Tulsa is an 11-minute Featurette that looks at how the production from inception through to filming. With interview snippets from the production crew – as well as writer S.E. Hinton herself – and some nice glimpses at the original storyboards and concept work, as well as photos from the set. The blue-screen shots of the cast testing out some of the scenes are particularly interesting – designed to give Coppola an idea of what the locations were going to look at. There’s plenty of on-set footage, with Coppola himself talking about the importance of time in the story, Diane Lane attempting to understand what she’s doing in the movie, Nicolas Cage talking about how stupid Rusty James is and being a little pretentious about what he brought to his character, Matt Dillon attempting to defend his character’s naivety, and Fishburne explaining what his character does. Even Rourke gets a brief moment to talk about his character’s motivations – oddly foretelling the same disillusionment that he himself would feel towards Hollywood. The filmmakers talk about the use of black and white, about the shadow images (often actually painting shadows onto the walls), the key fight scene and stunts, the astral body sequence which was done cleverly without wires, and the way in which they shot the fish in colour against a giant TV projecting the scene in the background. Apparently Hopper hit a record number of takes for his few scenes, and we get some interesting b-roll footage of some of the scenes actually being shot. All in all, for an 11-minute Featurette, this one is packed to the brim with quality insight and background detail. Worth every second of your time.

The Percussion-Based Score spends a further 12 minutes with composer Stuart Copeland (from the Police) – who the director explains was recommended by Coppola’s own teenage son – looking at the importance of the score and how they put it together and matched it up to the visuals and dialogue. Coppola talks about what he wanted for Rumble Fish, and Copeland discusses the technology used to make it happen. They frequently discuss the importance of time, and the percussive elements which hammered that point home, with Copeland explaining that Coppola hadn’t wanted music for the film, he had wanted something very different – which is exactly what he got. It’s a wonderful look at how they put this score together without any of the digital technology that, these days, would make it relatively easy. Impressive stuff, and another worthy watch.

Here we get to watch the entire movie with just the score and effects playing out, which is actually a very rewarding experience. Some of my favourite music cues include the segment taken from the excellent closing song “Don’t Box Me In” and incorporated into the main film; the bit that plays while the brothers take a bike ride; and, of course, the main theme. The score is so effective – so perfectly timed and richly atmospheric – that you could almost understand the entire film without the need for dialogue (c.f. The Artist). Seriously, try it.

Here we get a substantial 19 minutes of extra footage. It’s all very poor quality – off a very old, slightly warped, video tape, with muffled sound too – but worth checking out. It mostly concerns the dropped sub-plot of Steve’s book, and the further development of his character, but there are some nice touches involving Dillon’s protagonist and even an extra added gem with Rourke’s Motorcycle Boy.

Motorcycle Boy Isn’t Coming Back is 2 minutes long and has Steve and Rusty James discussing his brother’s absence and what he would have thought of the upcoming rumble. You can see why this was arguably unnecessary, as it largely covered ground that was dealt with elsewhere.

Hey Steve, Is Your Mother Dying? is another 2 minutes with Steve rushing away from school with news that his mother has had a stroke, and Rusty James watching his friends play basketball.

Stealing Hubcabs With Steve further expands on this thread, with Steve returning from the visit to his poorly mother, persuading Steve that they have to steal hubcaps to make some quick cash. It’s a longer sequence, running at almost 7 minutes in length, and has some interesting rooftop shots (and jumps).

Feelings And Ideas Book better is the shortest, at about a minute in length, and explains this minor sub-plot that was hinted at in the main feature (the little book Steve is always writing in), with even a brief bit of Rourke pacing in the background.

“Take The Chapter On Rusty James And Write The End” is a 6 minute scene with Rusty James exploding when Steve says that his big brother is crazy, and the two talking about who the Motorcycle Boy really is.

Cassandra Was The Princess Of Troy rounds out the scenes with a minute-long chat between Rusty James and the Motorcycle Boy – the latter talking about his ex-girlfriend, the teacher, and the Greek character by the same name. It’s a great little Rourke touch and the gem of the bunch (a still from the scene can be seen below).

The disc is rounded off by a Theatrical Trailer, presented in HD.

The package also comes with another one of the Masters of Cinema booklets, a nice little touch featuring some text from Coppola himself, as well as some interesting still photos from the production. If you’ve never come across Francis Ford Coppola’s Rumble Fish, then now’s the time to rectify that. A potent example of remarkably effective style over substance, this experimental mood piece was a Box Office disaster upon release, going on to become a much-loved cult classic in the years since. That it has only grown in acclaim is a testament to the lyrical beauty of the piece; a pure example of poetry in motion. You simply have to see it – it’s one of the director’s most underrated and underappreciated classics; brimming with raw, young performances from now-familiar faces – including an early career-high from Mickey Rourke – blending stylishly evocative black and white visuals with an infectious percussive score, and pushing the boundaries of arthouse filmwork, the end result is certainly one of the director’s most strikingly atmospheric masterworks.

Making its Blu-ray debut courtesy of Eureka’s superb Masters of Cinema series, Rumble Fish comes in a Region B-locked package complete with a solid but flawed remastered video presentation and an impressive DTS-HD Master Audio 2.0 rendition of the Original Stereo track (as well as an inferior 5.1 remix). The hefty extras include everything previously available, as well as an excellent music-only track, also in lossless 2.0. Fans should have little hesitation in picking up this package, whilst those intrigued by this lesser-known gem should consider that the film alone makes it worthy of a blind-buy; the rest is just a bonus. Buy it now; see it now. Highly recommended.