Lots of power for little cash 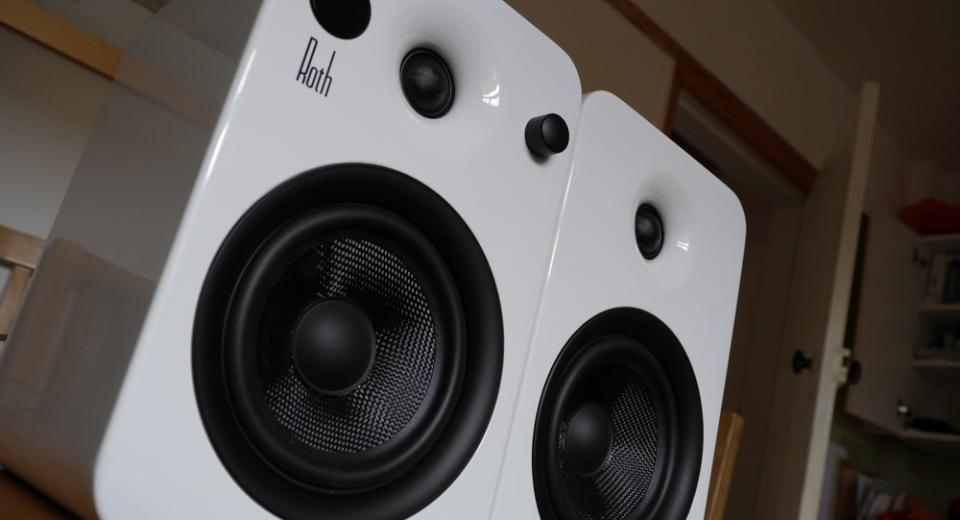 What is the Roth OLi POWA 5?

Roth has provided us with a couple of impressive soundbar products already but this is something a bit different.

In fact, although not quite unique, their OLi POWA 5 system is an unusual product, specifically in the vast array of connectivity options it offers. The closest thing we’ve reviewed is the superb little Ruark MR1 package but that had nothing like the Roth’s versatility in terms of inputs. The POWA 5 active ‘monitor’ speakers have actually been available for quite some time but this latest iteration introduces something new to the mix.

The rise in ownership of Android mobile devices has seen the manufacturer’s focus shift away from providing AirPlay support for Apple devices, to the more universal Bluetooth technology. As such, we’ve seen most new Bluetooth enabled audio products including AptX support to enhance the streamed listening experience and this is the very upgrade Roth has made with the new POWA 5’s. So let’s find out how these actives measure up.

The review sample provided was of a high-gloss white finish (iThing style) but there are black and red versions available as an alternative. The new POWA generation does feature some minor cosmetic changes over the non-aptX capable models. The Roth logo is changed to match the rest of their new products and the infra-red sensor has been shape-shifted from rectangular to circular with the control knob now larger and flatter to match the new IR window.

Other than those alterations, the POWA 5 are identical to the outgoing package with exposed drivers and rounded edges. We do prefer our speakers sans grilles but this lack of driver protection might be a concern for those with small children and/or aggressive cats. Unsurprisingly, given the fact almost all the connections and all the amplification is housed in it, the left speaker is considerably heavier than the right but both feel well-engineered for the price-point. The connections are at the rear and what a lot there are! At the rear of the left speaker, from the top, we have two Aux in – one 3.5mm, one left/right RCA and on the opposing side, to the right of the bass reflex port, are two S/PDIF digital optical inputs. There’s also two USB ports that can be used to charge your mobile devices or if you have an iPod docking station with USB out, for audio playback.

There are also outputs for an active subwoofer and speaker terminals to connect between the left and right speakers. This is the sole connection on the back of the right speaker and it raises and interesting point on whether it can truly be claimed to be an active monitor, since that usually describes speakers with independent amplification for each of the drivers. That’s probably splitting hairs though.

Connectivity options are probably peerless, in their class

We think it’s worth noting the size of the Roth OLi POWA 5’s before rushing in to an online purchase. These aren’t some compact, little desktop’s, as per the Ruark’s, they of a more of a bookshelf speaker size with a width of 17.5 cm, a height of abut 27cm and a depth of 20.5cm. Not that you couldn’t use them as quite flash desk speakers, we did, just make sure your desk is on the large side or at least free of clutter. Roth supplies a ‘kettle’ style power cord which, again, hooks up to the right speaker as well as some quite decent gauge speaker wire to interconnect the two speakers. It’s colour coded in ‘silver’ and copper wiring and as long as you ensure you connect the same wire to each of the terminals, there’s no need to worry about which goes in to each of the respective positive and negative binding posts. Roth recommends that you give the speakers at least 25cm clearance at the back from any walls to avoid audio impairing reflections although we had them in one position that only had 15cm, or so, breathing space without it having a particularly damaging impact. That said, we would stick with the manufacturer recommendation wherever possible.

The easiest way to operate the POWA 5 system is by using the included remote control, although there are some limited options mounted on the left speaker. The remote has dedicated buttons for input selection, volume, power and independent Bass and Treble controls as well as one to reset those adjustments if you feel you’ve taken things too far but are not sure by how much. The volume knob on the front also doubles up as an input ‘toggler’ but the only visual indication you get comes from the IR window on the opposite site which has two lights. The first illuminates Blue to show the unit is powered up and orange when in standby. The other light glows white when a Bluetooth connection is established and yellow for all the other inputs, which isn’t terribly useful but there are limits as to what can be done with just a couple of LEDs. Finally, if you want to completely power down, there is an On/Off switch at the rear of the left speaker

Desktop, stereo or AV system - it works for all

Perhaps that should read simply ‘Feature’ as other than the Bluetooth capability, the Roth OLi POWA-5 don’t have much to boast in this department. Mind you, this is a speaker we’re discussing and not the latest Smart TV, so what do you expect. As we said in the opening paragraphs, the real reason for this refresh to the product was the inclusion of aptX capable Bluetooth and it’s been a successful addition. Streaming from a Windows 7 PC using a Belkin V4.0 adapter was totally rock solid and with no audible interference and we also streamed using an iPad 4 and Nexus 7 tablets without issues.

You would expect that with a pair of low end Kevlar drivers each measuring just over 5-inches, in diameter, that the bass performance of the OLi POWA 5’s would be impressive, and so it proved. Even at ‘work sensible’ volume levels – not that we really subscribe to them - you can feel their hearty presence in just about everything. We subjected the Roth’s to our usual selection of complex bass tracks and it came through with credit. John Grant’s Pale Green Ghosts has an intro which can be particularly taxing in this department and whilst, if pushed to raucous party listening levels, it did lose the plot, somewhat, the POWA 5’s powered through it at anything like sane volumes.

We like our music loud (just ask the neighbours) and they certainly didn’t disappoint in that regard but, again, despite the claimed 80w of amplification on board, there are limits in how far you can twiddle that dial. Not only will bass distort but the 1-inch tweeters also give up the fight at around ¾ maximum volume. The soft dome tweeters do a grand job most of the time , however, although they do lack the clarity of the semi-competing Ruark MR1’s and the POWA 5’s don’t seem to have the same transparency either. There’s not a great deal in it but the sense that Ruark has matched drivers and crossovers better does become apparent in certain instances, particularly with female vocals over a bassy jazz track. Matters definitely improved after about 10 hours run in, however, with a slightly more coherent sound stage evident and Elbow’s new album, The Take Off and Landing of Everything got better with every listen! Bass sometimes overwhelms but performance is generally very impressive. And they go LOUD!
We wouldn’t want you to think the Roth POWA 5’s are really lacking in anything, however. For a super-versatile system, with the amount of power they have that their disposal and all the amplification built-in, they do represent superb value. You can lay your hands on this system for a penny under £250, which is actually remarkable value, especially if you compare that to what you’d get soundbar wise for a comparable sum of money. Of course they don’t have the placement versatility of a soundbar (or speakerboard) but if you can accommodate them somewhere that would allow the tweeters to be at more or less ear level, you will find they trounce just about any soundbar you can think of. Even better, later on, you could take advantage of that subwoofer output to really hear those low frequency effects in all their glory but you’re not likely to feel lacking in the meantime.

The new Roth OLi POWA 5 package has undergone some minor cosmetic alterations. The IR window has changed shape, the volume knob is flatter and the manufacturer’s logo has been redesigned but the major difference from the outgoing model is the addition of aptX Bluetooth compatibility. Otherwise, they look identical and maintain a feeling of solid engineering with a clean, modern design featuring cabinets with rounded-off corners. The review sample was finished in high gloss white but there are black and red alternatives.

We’d probably say the POWA 5 are peerless, in their class, when it comes to the connectivity options. Other than the aforementioned Bluetooth support, owners get two digital optical inputs, a pair of aux stereo jacks and a brace of USB ports that can be used to charge your mobile device, or MP3 player, as well as playback music through a compatible iPod dock. In terms of operating the system, it’s easiest with the supplied, pocket sized remote but most of the basic controls can be carried out through the left speaker which is also home to all those connections and an 80w amplifier.

The 5-inch low-end drivers are the stars of the package and, allied to the robust and fairly large cabinets, help to produce audio bearing genuine impact and authority. The Roth’s are fairly transparent but there are times when the tweeters become overwhelmed within the package and perhaps the sense the drivers could have been better matched, or tuned, sometimes sprang to mind.

That said, this is an extremely versatile package with comfortably enough to recommend its audition for deployment in a variety of applications. It will make a super desktop system but will be just as at home in your living room as your everyday stereo music device and, with its array of connections, it can be slotted into your AV setup to bolster movie and TV soundtracks. Currently priced at around £250, the Roth OLi POWA 5 present superb value that couldn’t possibly leave you feeling short-changed.