Roth shows how a budget soundbar should be done 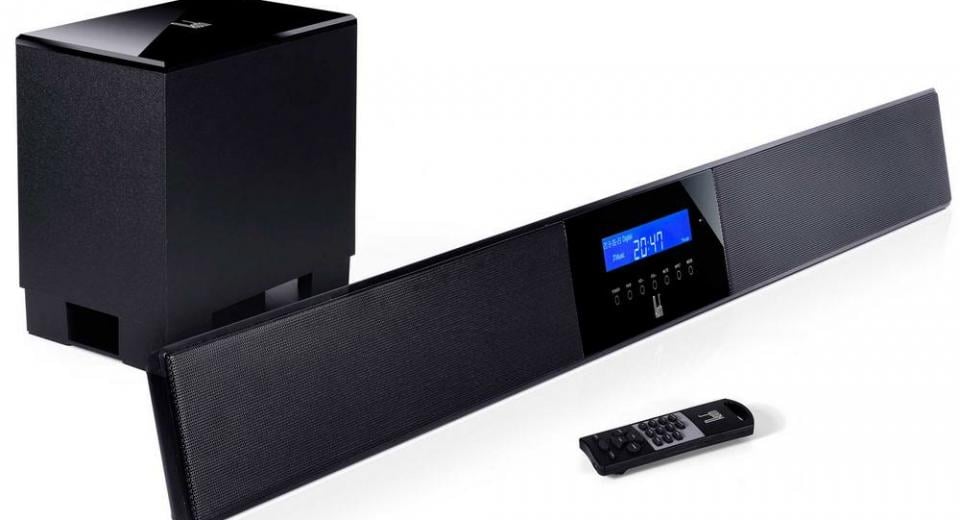 Roth aren’t newbies to the soundbar market, this product, as the name would suggest, is the British Company’s 3rd assault on this burgeoning product sector so they should have learned a thing or two along the way. In keeping with Roth’s philosophy, the Bar 3 is priced very attractively and at a recommended retail of just below £250, this speaker bar and wireless subwoofer combination significantly undercuts similarly specced packages we’ve seen from most of the competitors. For that, the BAR 3 loses the ‘convenience’ of HDMI and ARC but since that doesn’t always work as should it and doesn’t really bring much in terms of audio quality enhancements, over optical, it won’t be missed by many. This round is on us – time to visit the BAR. In keeping with its lifestyle audio status, the BAR 3 is unobtrusively designed in an all-black, plastic shell which is mostly fairly basic looking, from the front, but features nice curves to the corners, around the back. Unusually for a product in this price sector, the BAR 3 sports a visual display panel which gives feedback on source, time, volume and sound mode. It glows blue but can either be dimmed or switched off entirely – which is good thinking and it re-illuminates upon button commands when in that state.

Wired connectivity options aren’t exactly the most expansive – the BAR 3 has a single S/PDiF digital audio input and two analogue 3.5mm jacks, hidden in a recess at the rear but that should cater for most people with a flat-panel TV where digital audio outputs are now almost routinely included. Some might lament the exclusion of HDMI, and therefore the Audio Return Channel (ARC) feature, but we can live without it and, besides, it’s easier to hide the end of an optical cable than it is with an HDMI lead. Pleasingly, the BAR 3 does include Bluetooth connectivity which opens it up for music and audio streaming from smartphones and tablets.

It doesn’t really get much easier in the AV World than setting up a soundbar via an optical connection and Roth includes a thin-grade cable in the box. It’s then simply a matter of plugging in the power supply and the separately powered subwoofer unit and you should be good to go. The sub and speaker bar should already be paired, out of the box, but in case yours isn’t, it’s a simple operation to redeem the pairing by means of buttons on the sub, remote or main unit. The speaker bar has touch sensitive buttons, on the front, that allow you pretty much all the functionality afforded by the remote but there’s no discreet setting for the subwoofer volume on the bar. The remote control, itself, is styled quite nicely in two-tone grey and features a cut-out section at the bottom. All the buttons are easily accessed from toward the middle of the handset, and include every sound mode available but we found the unit could take a long to respond to its commands. Either the one we were sent isn’t quite working right or some work needs to be done on the infra-red sensitivity. Pairing of Bluetooth devices can be done on both the remote and speaker bar via a dedicate button and once its broadcasting will appear on your device as ROTH B3. Again, straightforward stuff and we found connection between the ‘B3’ and our range of Bluetooth equipment (Nexus 7/iPad4/Galaxy smartphone) to be both robust and reliable.

In its table-top configuration, ie. Sat in front of the TV, the BAR 3 measures almost exactly 9cm, vertically and so it’s within the realms of just infringing on the bottom of the screen, for those modern TVs which are very low slung. Most will be fine however but it’s something worth checking as something that can start out as a minor irritation can grow over time. Roth also packages a wall-mounting kit in the box which will of course negate that issue.

Barring the previously mentioned inclusion of Bluetooth and the LCD Display Panel, the Roth BAR 3 doesn’t really add many bells and whistles, but you wouldn’t expect it to, given the price. It possesses 8 DSP Modes – Movie, Music, Sport, Game, TV, Small Hall, Large Hall & Opera – as well as the ability to ‘pass-through’ unprocessed. Beneath the metal grille, which is non-removable- are two pairs of mid-range drivers and a couple of tweeters and although Roth hasn’t revealed their size, with the light catching it in a certain way, it looks as though there 2-inch and 1-inch respectively, which is pretty common for this level of soundbar. Again, Roth doesn’t tell what size of driver is fitted in to the subwoofer but with its compact, 295x307x182mm (HxWxD), dimensions it woud be surprising if it were more than a six-incher and we suspect it may be slightly less. The BAR has a rating of 40W for each of the stereo channels and 60W, for the sub, but the proof of the pudding remains in the eating… Since Roth is a specialist audio manufacturer, we had high hopes for the BAR 3 and they were largely realised in its all-round performance. Given the number of pre-set DSP modes, it might take you a while to work out what’s best for you, and your room, but the default Music configuration passes through the signal unprocessed and seemed the best alternative for most applications. The BAR 3 is blessed with an inherently warm sound, in stark contrast to competing products from the likes of Samsung and LG, which are far more clean and clinical. There’s not a great deal of a sense of surround from any of the DSP modes so if pseudo-multichannel is what you are after, you might be best looking elsewhere but we were more than happy with a more than competent 2.1 output.

The BAR 3 is also quite capable of going pretty loud without buckling under the pressure and it took centre stage at a recent party Chez Hodgkinson where it provided the backbone of musical support without getting drowned out by rowdy guests (and hosts). In fact, many commented on how impressed something so sleek and slimline was capable of producing such satisfying bass, although, in fairness, they couldn’t see the subwoofer hidden under the table. Still, that should give fair indication that this compact little unit packs more slam than you would expect and it’s also very tightly integrated with the 2 channels coming from the bar. It might not look much, but it certainly competes with packages whose subwoofer specs are, on paper, superior.

Whilst it’s good that the BAR 3 has the versatility to produce satisfying music, it’s bread and butter will always be as a vehicle for TV and Movie audio. Again, we were more than happy with it in this role and where 5.1 audio was being fed in, the BAR 3 did an excellent job of mixing them down, meaning you weren’t missing those extra channels too badly. Dialogue was generally very clear and easy to hear, even when soundtracks were pumping out the effects in loud order, and there was a good sense of localisation and placement. The BAR 3 doesn’t really have a narrow sweet spot either, so pretty much the same experience can be had from flush on, up to about 45 degrees off-centre. The fact the Roth Bar 3 has no real drawbacks, at the price they’ve managed to get them to market to, is testament to the British company’s expertise and frankly leaves much of the rest in this bracket trailing in its wake.

There’s not much to fall out with in terms of the Roth BAR 3’s looks. It’s a plain black package that should sit low enough so as to not get in front of the screen and the only really remarkable thing is that it has a fairly large LCD display on the front. Fortunately, said display can be dimmed or even switched off entirely, but the visual feedback was particularly welcome given the somewhat skittish performance of the remote, which sometimes wouldn’t register with the bar. Completing the package is a compact subwoofer unit which connects wirelessly with the speaker bar. Wired connectivity options are limited to S/PDIF digital audio and two 3.5mm analogue jacks but supplemented by Bluetooth, which is always a useful feature.

Setup doesn’t really get any more simplistic than it does with the BAR 3 and you should be ready to go within minutes of getting the box home. Once hooked up, Roth’s package will treat you to some price-defying audio with pretty much anything you can throw at it. The BAR 3 is equally assured with music as it is movie and TV soundtracks, delivering warm, tight sound with a very impressive degree of localisation. The subwoofer might not be the biggest but it’s capable of producing more bottom end than one would probably expect and it integrates with the stereo speakers on the main bar to great effect. The Roth BAR 3 is a great example of something simple done right, and is comfortably the best soundbar we've heard under the £250 price barrier. Excellent value and therefore a Best Buy.