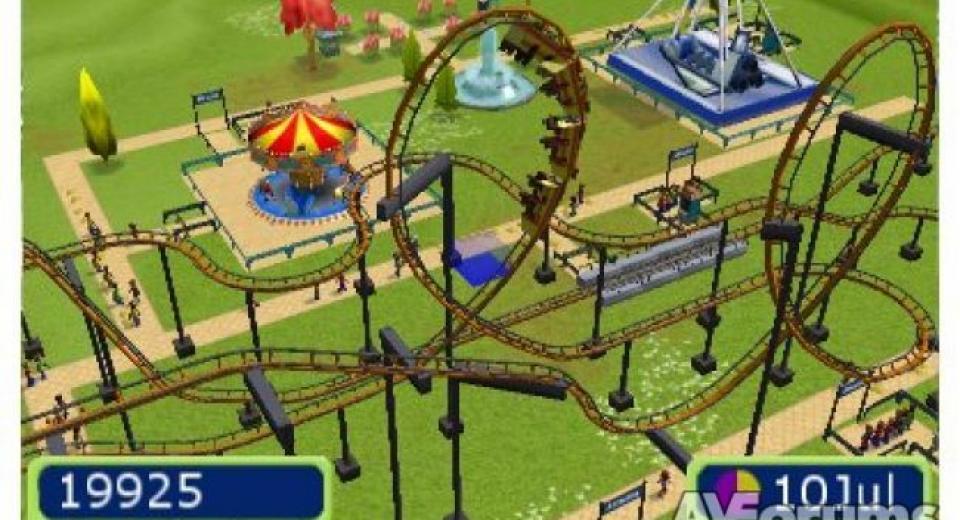 It’s always horrible to go back to a well-respected game and discover it’s not half as deep or entertaining as you once thought, but that’s unlikely to ever happen with the seminal RollerCoaster Tycoon. Chris Sawyer’s blend of park management and ride design created a benchmark for the PC strategy genre on its original release, and most of the subsequent iterations and sequels kept largely true to that formula, choosing to simply increase the complexity on offer, along with diversifying the suite of graphical styles and park components at your disposal. It is, in short, an absolute classic of PC strategy game design, and the ruination of many an evening’s allotted homework time back in the late 90’s.
Given that’s the case, it’s even more painful to revisit a title in its most modern guise - on the most suitable handheld device for the franchise - but only to see it languish with an obtuse user interface, bafflingly missing features and presentation that’s so low-budget and spartan that it’s a wonder it ever made the cartridge. RollerCoaster Tycoon 3D still holds the core of that much-copied design-build-ride gameplay loop that many hold dear, but it’s far too fiddly and annoyingly undercooked to be taken seriously.
There’s a basic ‘story’ mode on offer here (consisting of static images with dialogue overlayed on top, telling a story of a young upstart ‘coaster designer learning the ropes), and it serves its purpose as an introduction to the basic controls and principles behind designing your theme park. Challenges are issued and have to be met with your designs, and once you’ve cleared each segment you’re shunted on to the next phase and another cutscene. Even early in this section however, the cracks begin to show. Why is there no indication of the sections you’ve completed when looking at the story menu? Why do you have to hit a face button to move the dialogue forward when you’ve been selecting everything with the stylus up until this point? Why do the characters just stare at each other in some sort of weird purgatory until you push the A button to make them talk? It’s a strange mode, and its charms likely won’t last too long before you’re hitting the ‘free build’ mode to get your fix. As per tradition, you’re able to craft your own individual parks and ‘coasters from several different styles here, all whilst balancing the cheque book and keeping your patrons as happy as they can be. This is the mode you want. You’ve got zoning to think about, gift shop positioning to consider, staffing levels and patrol routes to work out, ride appeal and foot traffic to work around. The top screen on the 3DS provides a basic rotatable 3D view of the action, whilst the bottom screen shows a 2D overview of whatever’s on the top screen, allowing you - in theory - to drag paths and place items directly with the stylus.
In principle that’s a fine interface to work with, and we’ve seen it done well in numerous other DS and 3DS strategy titles. RollerCoaster Tycoon 3D’s abstracted menus dotted around the side of the screen, their accompanying strangely-designed icons and confusing layout do their absolute best to get in the way of any intuitiveness however, and even after several hours’ worth of play you’ll be none quicker in navigating around their overly-granular design. It cannot be stressed just how important it is for any strategy game to get its interface right, and unfortunately this is one of those occasions where simply everything feels wrong. On top of that, if you eventually do find the piece you want, dragging and dropping on the touchscreen barely functions as advertised.
There are other, strange choices too. Rollercoasters have no height markers to speak of, so designing one is now more of a hit-and-miss prototyping process in which you’ll be deleting half the pieces and reworking your layout more than actually considering what you want to do next. A lot of the granular information has also been removed, so you’re unable to directly view what your patrons are thinking anymore, and renaming options have been pretty much axed entirely. You’re able to build a park, for sure, but you can’t really make it your own in the same manner, and it’s surprising as to just how much that detracts from the formula.

The ability to ride your ‘coasters in full 3D and view your surroundings with tilt is a neat idea, but sadly that’s about the only functional new design feature that this 3DS version of the classic brings to the table. There are simply too many missing features and pieces of axed content to recommend it to anybody aside from those that absolutely need to get just a small taster of what the original was about. Even then, there are far better strategy games spun out of that design philosophy to consider on the DS and 3DS.
The (in)elegance of the interface says pretty much all you need about RollerCoaster Tycoon 3D, and sadly this is a genre that can’t rely on other facets of the design to compensate in the other direction. The beating heart of the original is still there if you persevere for long enough, but this is absolutely not the way I want to remember the classics.