Putting the 'War' in Star Wars 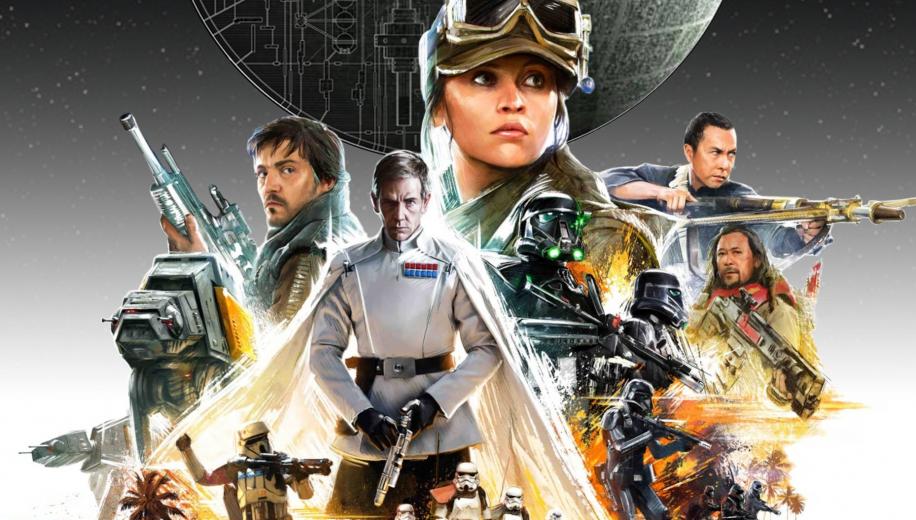 An adult Star Wars movie (and a Darth Vader) that fans have probably been waiting the best part of half a century to see, and whilst not perfect, it fits perfectly, which was more than half the battle.

Despite the tremendous success of Star Wars: The Force Awakens, both in financial terms and also in terms of so superbly capturing the spirit of classic Star Wars - at once catering for new audiences whilst paying respectful tribute to the wishes of long term fans - there was still some apprehension about Rogue One. Did we really need another Death Star movie? With the outcome of the story painted clear from the subject matter, would people really be able to get on board for this standalone effort? Thankfully the end result was another resounding success, this time managing to sit within the same universe as something as fun and exciting as The Force Awakens, and yet remain at the polar opposite end of the scale. Dark and oppressive, it's a war movie through and through; finally, as many have so uttered, putting the 'War' in Star Wars. Fans long hoped that this would come to fruition with a Clone Wars movie, but Rogue One manages to fill the gap perfectly. It paints a picture of a galaxy in chaos after the eradication of the Jedi and the ruin of the Republic, with the Empire's stranglehold choking the life out of the numerous worlds under its control.
Rogue One is a great war movie, and a breath of fresh air in this ever expanding franchise, with Disney hitting all the right notes in their attempt to broaden the scope, diversify the tone, but still maintain the same overall universe. Performances are universally good - and it's a welcome treat to see another Star Wars blockbuster so effortlessly driven by a (relative newcomer) female lead, with Felicity Jones proving more than capable - although special nods should go to Donnie Yen's blind pseudo-jedi stick-warrior, and Alan Tudyk's cynically witty imperial droid, offering humour but not at the expense of Jar-Jar Binks-ing the whole affair. Clearly it's flawed around the edges; some significant changes were made to the last third of the piece (despite the director insisting otherwise), and it's Forest Whitaker's Kurtz-esque guerrilla rebel who suffers the most as a result of this, but, despite these changes being supposedly made to 'lighten' the tone, there's nothing evident of that in the finished product. Indeed, were it not for the packed-with-other-shots trailer, nobody would be searching for another version of Rogue One, this would be more than enough.

Disney/Lucasfilm's Rogue One hits UK shores on a Region Free Blu-ray complete with a stunning 1080p/AVC-encoded High Definition video presentation framed in the movie's original theatrical aspect ratio of 2.40:1 widescreen. Brimming with pinsharp detail, picking up the nuances of this gritty, grimy environment; the weathered faces on close-up; and the grand epic feel of the vast new worlds, Rogue One is simply breathtaking.


A spectacular effort, reminding us of just what Blu-ray is still capable of

The 2D version is thickly textured with a thoroughly filmic quality which belies the digital cinematography, there's something to impress in every scene, and in every change of scenery. From Jedha's dusty, ancient feel, to the fiery hell of Mustafa, to the deceptively idyllic beachfront of Scarif, Rogue One's universe is vibrant, epic and imaginative - but ultimately very real - and the colour tones bring the piece to vivid life without ever betraying the darker tone. Shadow detail is excellent, affording the darker sequences plenty of room to shine without any loss of clarity. Sure, it's hard not to wonder what a feature shot at 6.5K and finished with a 4K DI would look like on Ultra HD Blu-ray but until Disney are ready to kindly allow us to double dip, we'll have to make do with this. And, thankfully, it's a pretty spectacular effort, reminding us of just what regular Blu-ray is still capable of.

The 3D version is something of a mixed bag thanks in part to the way the film was shot. Since Rogue One was filmed in 2D and then converted into 3D in post-production, the ability to add effective dimensionality is hampered by the frequent use of shallow depth of field and the mostly hand-held photography. The film is also very dark during the first half, especially on Eadu, which also doesn't really lend itself to great 3D. However there are plenty of scenes where the addition of 3D really adds to the experience, especially in the crowded streets of Jedda and on the brightly lit beaches of Scarif. The raid on the Imperial data archive makes full use of 3D to give the sequence some vertiginous depth, whilst the big space battle looks superb, as does Darth Vader's famous final scene. The 3D also has the added benefit of making certain CG characters look more realistic and overall there is a great deal of fun to be had from watching the 3D version, even if the 2D disc remains our preferred option.

The accompanying DTS-HD Master Audio 7.1 track is every bit as magnificent as the video. Again, enthusiasts are going to be frustrated by the lack of immersive audio on a Disney release - as with Ultra HD Blu-ray, they simply haven't gotten on that bandwagon yet - but, despite the lack of Dolby Atmos or DTS:X, this is a reference track through and through, delivering on all fronts and proving an example of the best that a lossless surround sound format can still offer.


A reference soundtrack through and through

Whilst dialogue remains clearly and coherently defined, and prioritised, it's the sweeping score and immersive effects that really pull you into the taut tale. And although the classic Star Wars notes are side-stepped here for the score, there's still a grand feel to the orchestral piece; at once doomed, and at once hopeful - much like the piece, remaining true to the rest of the universe whilst sitting apart from the main core. This gets fantastic coverage across the surrounds, pulling you into the epic adventure. Effects deliver star destroyer and Death Star intensity in spades, shaking you right off your sofa, with LFE rumble underfoot and surround usage so excellent that you feel like the ships are passing all around you. Blaster shots carry weight too, whilst explosions - from grenades to the destruction of Jedha - threaten to blow you from your seat. It's a great track.

Initially it appears that the Blu-ray release of Rogue One has a decent set of extras but on closer inspection you realise that they are in fact something of a disappointment. Firstly not all the extras are even on the Blu-ray, with various additional featurettes being saved for retailer exclusives or appearing online. As a result the extras that are on the Blu-ray don’t tell the full story and feel too light and promotional. It’s well known that Rogue One had a complicated production history but there is no mention of the much publicised reshoots. We don’t get the various trailers, which were full of scenes that were dropped in favour of the reshoots, nor do we get any deleted scenes, which must be extensive. We also don’t get a commentary track from director Gareth Edwards, all of which leaves us in no doubt that a collector’s edition will be coming later in the year, as was done with The Force Awakens.


Only the extras package disappoints on this Blu-ray release

So what do we get? Well the 3D Blu-ray release includes the 3D version of the film on one disc, the 2D version on a second disc and the extras on a third Blu-ray (the 2D release just includes the 2D disc and the Blu-ray of extras). On the extras Blu-ray are ten featurettes, which are grouped under the heading The Stories. These have a ‘play all’ option resulting in a single making-of documentary that lasts just over an hour. These featurettes cover various aspects of the production but they all seem too short and there just isn’t enough detail about the story development, the production or the effects. The ten featuettes are presented in Full HD and in a 2.35:1 aspect ratio, which is unusual, and their titles are:

A Rogue Idea (09:00) – This covers John Knoll’s original pitch of his idea for Rogue One, how the screenplay was developed and the hiring of Gareth Edwards.
Jyn: The Rebel (06:16) – The character of Jyn Erso is explained and Felicity Jones discusses how she approached playing her.
Cassian: The Spy (04:14) – This short featurette covers the character and motivations of Cassian Andor played by Diego Luna.
K-2SO: The Droid (07:43) – This covers the new droid K-2SO and shows how actor Alan Tudyk created his performance both on location and on set.
Baze & Chirrut: Guardians of the Whills (06:20) – A featurette covering the Asian members of the cast, the motivations of their characters and why Donnie Yen and Wen Jiang wanted to join the Star Wars universe.
Bodhi & Saw: The Pilot & The Revolutionary (08:35) – An amusing piece covering the casting of Riz Ahmed as the pilot Bohdi Rook and Forrest Whitaker explaining some of his strange acting decisions with regards to Saw Gerrera.
The Empire (08:18) – An overview of the film's villains, their motivations and how they fit into the overall timeline.
Visions of Hope: The Look of Rogue One (08:24) – This featurette covers the most successful aspect of the film, the way it seamlessly recreates the Star Wars of 1977 whilst at the same time offering something new.
The Princess & The Governor (05:49) – An all-too-short featurette about how Tarkin and Leia were digitally created for the film.
Epilogue: The Story Continues (04:15) – A featurette covering the premiere of Rogue One and some fan reactions to the finished film.

There is also a brief featurette called Rogue Connections (04:31) which identifies some of the easter eggs within the film but as with the other featurettes it feels incomplete and too short.

Whilst not perfect, it fits perfectly

Rogue One really works as both a stand-alone film and a direct prequel to the original Star Wars. It brings an adult sensibility to the saga whilst remaining true to the spirit of the universe George Lucas created. Whilst not a perfect film, it fits perfectly with the other films and is an absolute triumph. The Blu-ray release is almost as triumphant with a stunning picture and sound that reminds us, in this age of Ultra HD Blu-ray and Dolby Atmos, just what regular Blu-ray video and audio can still deliver, if done right. It's reference through and through and only a weak set of extras spoil an otherwise superb Blu-ray release. Yes there will probably be a collector's edition later in the year to tie-in with the release of Episode VIII at the cinema but this remains a tremendous addition to both the Star Wars universe and your Star Wars collection.