"Stand in my corner, this one last time." 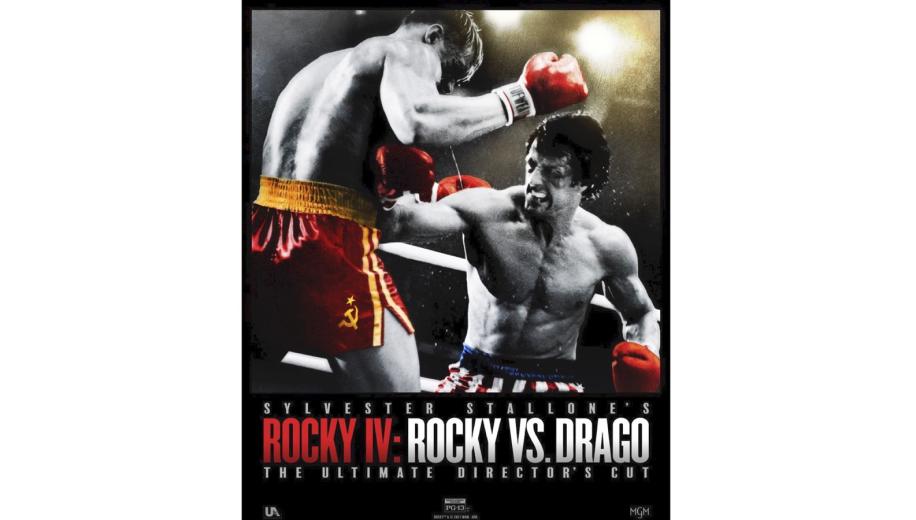 With Stallone wisely jettisoning and reframing much of the glamour and pomp from his 80s cheesefest, Rocky IV is fashioned into a considerably more weighty Rumble in the Jungle.

Having seemingly stepped away from the Rocky spin-off franchise, Creed, for what could be forever, a 75 year old Stallone returns for the ring to right some past wrongs - even if the only person who was really haunted by them was perhaps him. Critically savaged, Rocky IV has always had a warm retrospective following, maybe through rose-tinted eyes, or maybe because it's inspirationally attractive to the underdog in all of us - practically a superhero movie as Stallone's Rocky impossibly goes up against a beast of a Terminator-like opponent who literally kills people in the ring. Few would see it as desperately in need of a new cut (Rocky V on the other hand...) as it's just a product of the time, steeped in heavy-handed Cold War East vs. West symbolism, and seemingly endless montages, but hardly crying out to be reappraised. And what exactly was Stallone going to do? It's almost impossible to remove the cheese from an 80s film as that's precisely what defined them (c.f. Top Gun).

Content with his champion status, and happy to live his life, Rocky Balboa is seemingly uninterested in Russian interloper Ivan Drago, a machine of a man who lands in the US looking to not just beat him in a fight, but - on behalf of his entire country - prove the strength of Russia over puny America. His friend, trainer and former nemesis Apollo Creed feels differently though, unable to turn down the chance to defend America's dignity from this political assault, returning to the ring for an ill-advised exhibition match which ends tragically, spurring a vengeful Rocky to taking on the new titan himself.

Rocky vs Drago had a brief run in cinemas, coming swiftly to digital download with the surprising being not only the 4K tag but the additions of Dolby Atmos and Dolby Vision, delivering the feature - the only Rocky sequel in 4K too - in superb fashion. Sure, some of the earlier shots look a little smoother, but that was arguably partly down to the style of the source material, and there's an appreciable amount of improved fine detail here, and some seriously vibrant reds and blues (again, in the first act, they go a little too far with both, but they rein it back in for the rest of the duration). It's a great looking piece. The Atmos is perhaps marginally less impressive, seemingly dialled down lower than what appears to be mastered for many other digital release, and not quite as rousing as you might have hoped for - although perhaps the latter was partly intentional for this reframed look at the film.

There's an argument to be made that 80s films should be left where they belong, a snapshot into a cheesy past, full of OTT sentiments and style, montages and one-liners, still frequently classics, but never really able to escape the trappings of the period they were made in. Stallone doesn't quite unequivocally silence such naysayers, but he does impressively prove just what can be done, removing over half an hour of footage from the original cut and replacing it with a new half-hour-plus of footage, the majority of which restructures the entire first half of the movie, reframing it as a much more personal journey and a much darker one too, which eschews much of the 80s frivolity and outlandishness in favour of an almost relentlessly sombre tone.

Indeed, there's far more to Rocky vs Drago than just 'removing the robot' (which will NOT be missed), Stallone goes some way towards revitalising and reframing the whole effort, unable to ditch the political angles, but seemingly capable of toning them down and having Carl Weathers' Apollo do much of that work for him. The focus on Apollo's foolish decision helps change the angle of all the 80s-tastic flamboyance of the early exhibition bout, as all that pomp just seems to be a grand wake held early, and with its guest star - Apollo himself - oblivious of the role he is to play until it's all too late.

Stallone is still aware of the feature's limitations, alternately leaning into them or modulating them for better effect

Stallone doesn't rip the 80s out of the feature entirely, and in some respects - like the soundtrack and montages - hardly changes things at all, but perhaps that's for the best, as nobody needed a revisionist cut here, attempting to make Rocky IV something that it is not. Stallone is still aware of the feature's limitations, alternately leaning into them or modulating them for better effect, and the end result is a much more confident directorial effort, much more assured in its narrative purpose, building a far closer parallel path to the real-life Rumble in the Jungle, where an ageing Ali met a fearsome, towering Foreman in what seemed like an impossible fight, winning over the hearts and minds of a foreign land in the process.

Haters of Rocky IV - which is utterly fair enough, it's definitely a product of its time - will definitely not be swayed by this new cut, and will instead likely see it as merely hitting the exact same key notes with painful predictability. But fans? Well they're going to love this. For them, a more mature Stallone has delivered a more mature cut, and given the film a whole new lease of life.

Rocky IV: Rocky vs Drago - The Ultimate Director's Cut is in cinemas and available on Digital in 4K Dolby Vision with Dolby Atmos, from 25th November November.