Rocco And His Brothers DVD Review 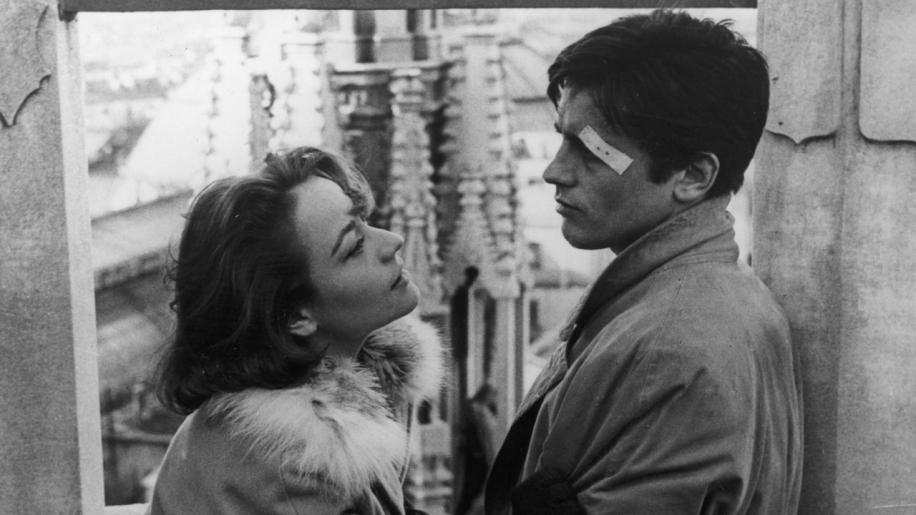 Eureka have issued Rocco And His Brothers with a newly struck anamorphic transfer of the film, and comes in with a rather strange window-boxed 1.80:1 aspect. I originally thought it was 1.85:1, and IMDB lists it as being 1.66:1, but, either way, the image almost fill the screen. Eureka, themselves, have assured me that it is 1.80:1, so we will leave it at that.

Although ostensibly a restored and cleaned-up print, Rocco still has quite a few issues. However, grain is not one of them. The picture is blissfully smooth, although this quality has a tendency to make it look a little hazy and glassed-over, as though too much detail has been wiped away in the cleaning process. Damage-wise, there are occasional vertical lines that intrude upon the image. The scene when Simone goes on the prowl with his buddies suffers a very faint one on the left of the screen. But this is trounced by the pair that seems to bisect the image into three columns of varying shade and texture during the scene when he has a tussle in an apartment later on. However, there is nothing too extreme in the way of nicks and scratches to distract. One annoyance, though, is the edge enhancement which, at times, can seem to be accentuated by the monochrome image.

Although black levels are good and consistent, the contrast does tend to fluctuate quite often and whiter portions of the picture can invariably bloom. A sunny exterior shot of the building site during the first act is pretty hazy and indistinct due to this, but overall this effect actually doesn't detract from the viewing experience too much. Shadow-play is reasonably effective, with many scenes taking place indoors and at night.

Detail is very good for close-up subjects, and many of the facial details on Delon, Girardot and Salvatori are gloriously finely-etched. But objects in the background lose a fair amount of definition, so don't go expecting too much from distance shots of buildings, crowds and streets etc to bear up to scrutiny. Considering that Rocco And His Brothers is a film so highly regarded in Italy and around the world, I am surprised that there isn't a better preserved print - but I only say this because there are so many American and British movies from this era and even earlier that have better transfers. But, the bottom line is that there are no detrimental visual issues that should put you off this release. The film doesn't wobble and certainly isn't scratched to Hell and back and there are many, many instances when it looks just fine. Girardot's legs as she teases Simone (and us); the boxing scenes and the disturbing, protracted street-fight between the two diametrically opposed brothers; the softly suffused lighting during the early scenes in the Parondi's first city-home and other interiors - all carry enough evocative style and imagery to make up for any deficiencies.

I feel a little bit cruel only awarding it a 6 out of 10, but I have seen much better-looking transfers from this period and even earlier. Right, well there is isn't a great deal that can be said about the 2-channel mono track that accompanies the film. We get a choice between hearing the original Italian version or a French dub (both carry English subs) and, although I'm not sure about this, we might be hearing Alain Delon's actual voice on the French track as some reports suggest that he spoke his lines in his native tongue. The French tended not to dub their own material in the same manner as the Italians (who often thought that their stars could sound so, well, better with other voices) so, if this is indeed the case, it would seem bizarre that Delon's voice is not his own. However, the Italian version is definitely the one to listen to as it is the most convincing.

Dialogue is splendidly clear and Nino Rota's score, although understated in the film, comes across very well indeed. Given the limitations of a soundtrack from 1960, neither track sounds too harsh, forced, or too bright and, if it lacks warmth and vigour it still delivers the ripe melodrama with conviction and a reasonable degree of detail and flourish when called for. It seems that Visconti's acclaimed film has finally got the respect and the treatment that it deserves courtesy of Eureka's Masters Of Cinema series. This release is filled with quality features that truly delve deeply into the background and the legacy of Rocco And His Brothers.

First things first, though. Originally touted as being a 3-disc release, with the third disc being Rota's full score, Eureka have dropped the soundtrack and we now only get the two discs - one for the movie and one for the copious special features. My check discs were missing the 40-page booklet featuring archival imagery, articles by Luchino Visconti and respected Italian film critic Guido Aristarco and a rare interview with Visconti translated into English for the first time - but this is present with the full-release copy.

First up on Disc 2 are two vintage newsreels from 1960. One from Cinercronaca lasts for 6.55 mins and covers a celebrity-filled awards ceremony. The second, from Caleidoscopio, lasting 1.46 mins, is a brief behind-the-scenes promo piece with on-set footage. The original Italian trailer comes next (3.14) and reveals no spoken scenes but remains moody, evocative and quite entrancing with Rota's score carrying the montage with style.

Les Coulisses Du Tournage (20.30 mins) is a French TV making-of from 2003 that is quite comprehensive despite its relatively short running time. Taking a look at the film, the cast and the production at large - plus the difficulties of shooting in the city and having to manufacture snow - the feature unfolds in a weird sort of half video-diary, half detailed verbal narration (subtitled in English, of course), intercut with snippets of an interview with Claudia Cardinale ... who still looks fine.

Then we get three lengthy interviews with, first up, Rocco's cinematographer Guiseppe Rotunno, then, Annie Girardot and finally, best of all, Claudia Cardinale. In Rotunno's, lasting for 27 mins and hailing from 1999, the lensman is low-key and soft-spoken and speaks at length about his life and career behind the camera. Surprisingly, there are no clips to illustrate his work. Annie Girardot's interview from 2002 lasts around 30 mins and really looks at her overall career and the very many directors and stars that she has worked with. She talks about how she met Visconti and how he helped get her break. She tells fondly of “the times” of the New Wave Cinema of Italy and France and mentions only a few anecdotes, preferring to generalise and pay enormous respect to the great filmmakers she has been involved with. By far the best interview is with Claudia Cardinale, filmed in 1999. Lasting for around 22 mins, this covers a fair amount of ground and, once again, does not really dwell on Rocco And His Brothers. She is very articulate and interesting, very on-the-ball and delivers a rich and tale-rife account of her life in front of the camera and how she found working with so many talented directors and producers over the years. Her Hollywood stint is covered and she manages expertly to skirt around the interviewer's probing of the attention her American co-stars - Charles Bronson, Burt Lancaster, Rock Hudson etc - may have paid her. She even confirms the notorious fight between Werner Herzog and Klaus Kinski on location during the filming of Fitzcaraldo, but confesses that likes “crazy people”. There is also a nice anecdote regarding Alfred Hitchcock's weird way with women. This is a great overview of a varied career in movies and Cardinale does extremely well with an engaging, informative and entertaining manner. Curiously, though, her association with Sergio Leone during Once Upon A Time In The West - the film that gave her international acclaim and is certainly the one in which she is at her most hauntingly beautiful - does not get a mention.

Finally, we are treated to an hour-long documentary (again subtitled) on the life and times of the renowned auteur Luchino Visconti. Featuring a vast roster of participants, including Burt Lancaster, Claudia Cardinale, Guiseppe Rotunno, Francesco Rossi and many other actors from stage and screen, this is a strange examination of a forthright and individualistic filmmaker. Charting his life from his beginnings, his love of the arts and how the many contacts he forged within this creative world shaped his worldview and his politics. His involvement with the magazine “Cinema” would hone his non-conformist opinions and, together with many others of this core set of cineastes and artists he would find that his outlet was via the motion picture. Somewhat unusual in its kind of meandering approach to the man and his craft, this documentary incorporates many locations - places where he lived and places where he filmed - and takes a somewhat impressionistic slant on the subject. Although very interesting, I, personally, found the style alienating but I cannot argue that the piece isn't full of fact, opinion and reminiscence. Visconti, himself, appears in some select interview footage from the archives and there is plentiful film of his celebrity-crowded funeral on March 17, 1976. Some of the clips from his movies are in really terrible shape and, bizarrely, it seems that the most recent films are the ones in the worst condition.

Overall, this is quite an eclectic set of extras. They reveal lots about the Italian New Wave of Cinema and the people who led its innovative charge, but there ends up being precious little concerning the actual film that they accompany. This may seem odd considering that it is hailed as a masterpiece ... but the primary focus is on the era that brought this type of filmmaking to critical acclaim and the personalities that shaped what must have been the golden days of Italian and, indeed, European movies. As such, this collection of features is well worth delving into. Rocco And His Brothers is a hugely impressive movie. At once engrossing and fascinatingly detailed, Visconti's familial ballad is also incredibly sumptuous with shots coming across as painterly, richly composed and suffused with the type of style that only European filmmakers seem able to produce. A very strong ensemble cast run away with the meandering plot and ably supply a wealth of emphasis, pathos and tragedy without lapsing into the cloying patterns that social melodrama tends to become enmeshed by. Alain Delon, Renato Salvatori and Annie Girardot give truly awesome performances and Visconti directs with controlled passion.

AV-wise, this won't win any awards, but given the vintage of the film, it would be churlish to complain. The print is clean and reasonably detailed and the soundtrack is fine. The copious extras may not strictly cover the main movie, but they offer a complex and beguiling snapshot of the era in which the film was made and produce an invigorating glimpse of the people who made this cinematic revolution possible.

A great all-round package from Eureka.