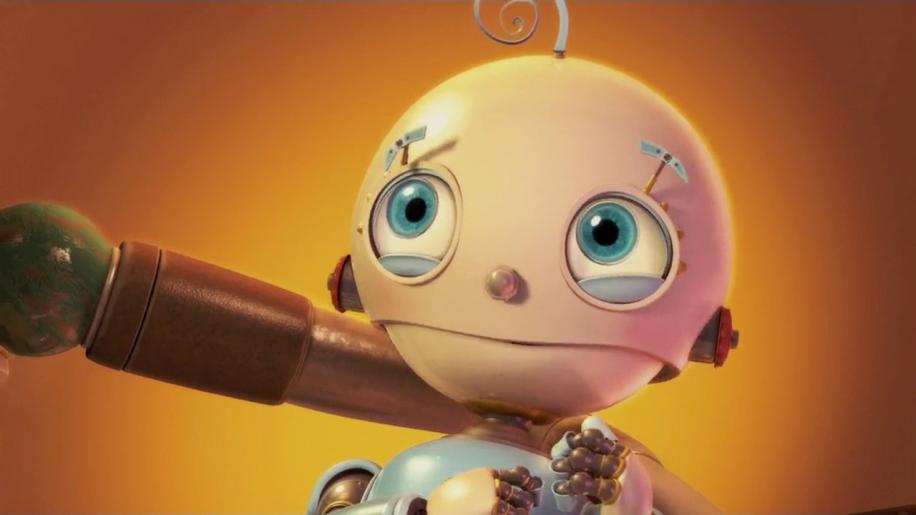 Mr & Mrs Copperbottom, a poor robot couple begin their family with the “birth” of their son, Rodney (McGregor) even if he comes in a self assembly kit. Being poor, young Rodney suffers inevitably from hand-me-downs, but that doesn't dampen his spirit as after seeing the Bigweld show, starring Bigweld (Brooks) who is the robot who invents things to make all robots life easier, he gets bitten by the inventing bug. Soon enough, he has created his own invention, with the encouragement of his father, young Rodney heads to Robot City to meet Bigweld and show him his wonderful invention. However, Bigweld has been overthrown by Ratchet (Kinnear) who has decided a less-helpful, more-corporate approach is needed in running the company so now, where the company used to make spare parts they will now be selling upgrades instead. Obviously, the poorer robots won't be able to afford upgrades therefore becoming obsolete and that mean they'll be destined for the Chop Shop, run by Madam Gasket (Broadbent) aka Ratchets' mother. Filling a need, Rodney becomes a fixer to the robots, which doesn't sit well with Ratchet, as well as looking for the missing Bigweld. If that's not enough, he also receives a letter from his mother saying that Rodney's father needs spare parts, as he's only got a few miles left to go.From the studio that brought us Ice Age, we have another computer animated tale and like Sharks Tale, it mixes jokes for kids (fart gags) with movie references for adults (2001, Braveheart) and as such it may or may not appeal either. That's not just the only similarity that this has to Sharks Tale as it also features quite a large well known cast, from Halle Berry and Robin Williams to Paul Giamatti and Stanley Tucci, it seems to want to throw famous names at us in a hope that it will appeal. Now I didn't have a huge problem with Sharks Tale and neither do I have one with this. It's reasonably short, it moves along at a reasonable pace and the story is quite simple for the wee nippers to follow as well but it's not the strongest movie or story to be told, so subsequently future viewing may well be less and less likely.

Voice talent wise it's perfectly fine, but the visuals here are very impressive, and I have to say have a different style to Pixar and Dreamworks, which is fine by me, as I'd rather that then see the same styles flogged to death. There's plenty of detail in the foreground as well as the background (check out a robotic version of Scrat, the Ice Age character in the train station) and the animation is pretty slick too, some may say not Pixar-quality but then, Pixar have a LOT more movies and experience under their belt and while this may not be as good in some peoples eyes, it's certainly snapping at their heels.

As said, it is a simplistic tale, the visuals are very well done and Williams may test some people's patience with his shtick but it's certainly not as annoying as some accounts I've read, but is it a recommended movie? Well I think anyone with a fascination towards computer animation should get this, as should anyone who liked Ice Age as well and while it may not be as good as “The Incredibles”, it's still a lot better in my opinion than Shrek 2. Kids certainly won't be disappointed.