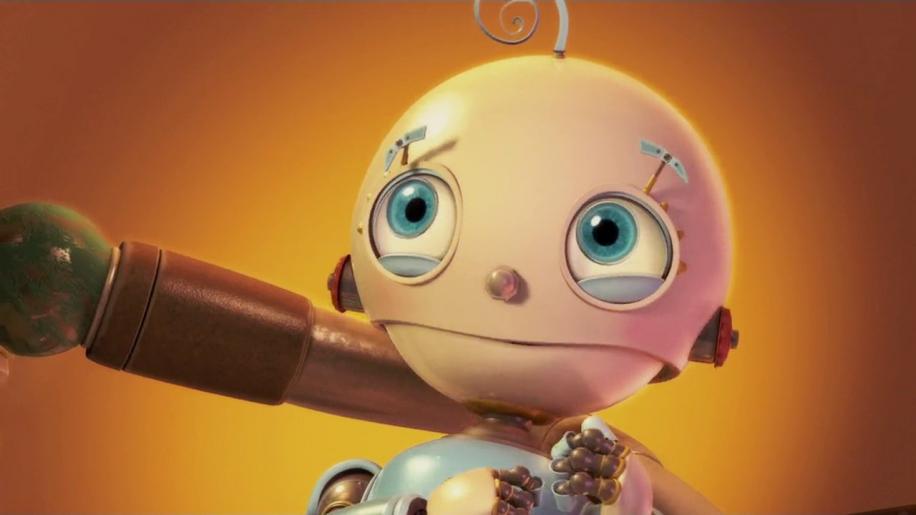 Wow! The way computer animation is advancing, it won't be long before we cannot tell what is real and what is not. The image quality is fantastic and the level of detail, astounding. Viewed on an 80inch projection screen, I genuinely felt I could have been watching in the very best cinema. The image has a strange mixture or softness and incredible detail all at the same time. Of course there is no grain visible which can wreck many a conventional movie. Colours are subtle for the most part, using pastel shades rather than vivid tones to suggest a time gone by but the very clever use of lighting gives the image a real three dimensionality as rays of sunlight cut through skylights and windows.

The detail is apparent in the robots themselves and the fantastically intricate landscapes. Everything you see is artificial with the exception of the sun and sky. There is no grass, no trees and no living things. Only metal, glass and other 'man' made materials. It has been mentioned that the colour gradients, especially in the depiction of the sky, are not that smooth and instead of the shades 'flowing' into one another, there are definite 'steps' as one moves to the next. Now when I viewed the movie the first time, I never noticed this
trait and even when I specifically look for this, I could barely see this fault, maybe this is due to the significantly higher bitrate of 6.90mbps used on this version over the 5.78mbps used on the Region 2.

Overall, a beautiful image which may not have the impact some prefer such as the vivid colours and blacks found in Shark Tale, but more subtle yet equally impressive and to my eyes, near faultless. The Region 1 once again beats the Region 2 by including a DTS soundtrack along with the more usual Dolby Digital one. Both are in 5.1 surround and both sound excellent. I have long been a fan of DTS over Dolby Digital and this soundtrack just strengthens that belief. Listening to the Dolby Digital first, it sounded exceptionally clear and dynamic. Surround effects steered beautifully around the room and bass was tight and deep. The musical score enveloped the listener deep into the action and I was very impressed.

Then I listened again using the DTS option and once again it still blew me away with the improvements over the Dolby soundtrack. Subtle sounds could be heard in the rears that weren't there before such as birds chirping. The bass could now be felt and not just heard, but it wasn't at all 'boomy' just taught, deep, visceral bass. Both offered clear vocals and voicing was never a problem, speech could always be heard even over the more energetic scenes.

Great sound, maybe not reference quality, but superb all the same. The Region 1 disc has lost a few of the Region 2's extras but gained some new ones of its own. Firstly there are two audio commentaries. The first is with Director, Chris Wedge and production designer/producer William Joyce. This one is my preferred choice as these two just have a good old laugh together as well as letting us in on how the movie came about, story ideas, concepts and musical choices. The second concentrates mainly on the technical aspects of the film and although informative, lacks the humour of the first. If computer animation is your thing from a career perspective, the second is for you, if you just want to know more about the movie then listen to the first.

Next we have 'Aunt Fanny's Tour of Booty' which features the character Aunt Fanny (just in case you didn't know, 'Fanny' is American slang for your derrière!) as she shows us around the station and is basically an excuse to string together some visual gags which are mildly amusing for us, probably more so for a younger audience and lasts about 5 minutes.

'Robots Original Test' was the short concept movie which was made to pitch the idea to the powers that be. It shows two robots acting on a film set and was made more to show the technical capabilities rather than the storytelling qualities so isn't that entertaining. It can be viewed on its own or with commentary by Chris Wedge and co-director Carlos Saldanha.

'Discontinued Parts' are three deleted scenes titled 'Tim from the TV Show', 'Rodney and the Rusties' and 'Rodney's Visitor'. Only the first is in a completed state, the others are in their very basic animation stages. None offer much and will not be missed from the finished movie. Again, they can be watched with or without audio commentary by Chris Wedge.

'You Can Shine No Matter What You're Made Of' features an interview with Director, Chris Wedge and others on the production team who discusses the process from start to finish on creating Robots especially from an artistic perspective. This lasts about 18 minutes and is reasonably interesting.

'Blue Man Group' look at the musicians behind the score for Robots, Blue Man. They show us how they wanted the music to sound 'metallic' and artificial and how they created their own instruments to meet those requirements. 5 minutes long.

Then we have 'Meet The Bots' which as the title suggests, gives us the opportunity to look at each of the main character in detail, who's the voice behind the character, the design concept and a 3D Turnaround function along with a few words telling us about them. With the exception of the character 'Diesel' who's voice is made up of samples from other famous people, each character contains an interview with the person who supplies their voice including Ewan McGregor, Mel Brooks, Robin Williams, Hale Berry, Greg Kinnear and British actor
Jim Broadbent.

'Robot Arcade' is where the younger viewers will find most fun and contains three games (one more than the Region 2 release). First game is Robot dance where you can select a dance for the small red robot from the movie to do. To be honest this is the worst of the three and quickly becomes boring. Next is 'Fender Photo Shoot' where you have to use your power of memory and recall to answer questions on photos you have been given 5 seconds to study. Kind of like that section of The Krypton Factor (for those as old as me!) and equally as difficult. This I found quite amusing. Lastly is 'Invent A Bot' which allows you to search for robot parts and create your own robot invention. If your robot can complete his intended task, you will be rewarded with a domino chain that you can start off. I played twice and both times my robot was not quite right so I didn't win. It takes a while to complete one robot and if all the parts used are not the correct ones, he falls apart. Hopefully you or your children possess more perseverance than I do!

Finally you have an X-Box demo of the Robots game but as my X-Box was a Pal one, I couldn't play this so cannot comment on it's worth. Along with some trailers including an 'Inside Look' at the much anticipated Ice Age 2, that's your lot for conventional DVD players although there is also some DVD-ROM features for use on a computer. It relies on you installing some software called HOTLLAMA but is well worth doing because once open you have the following additional extras: View High Definition Video, Play Robot Rush Hour, Play Gasket's Chop Shop, Visit official Web Site and Register your DVD. I clicked on the High Def option with baited breath but alas nothing happened. I can only assume that as the official release date for this DVD is 19th of this month, that these options have not yet gone 'live'. I'll check back on the 19th and place a footnote on this review to let you know how I get on. It doesn't have the music video of the Region 2 though but I did find one Easter egg. On the 'Upgrades' section (the extra material) click on the right hand side of the heading 'Upgrades' and you will be shown a short 'blooper' where Rodney's head falls off. Not that special, but I know you love these eggs! A reasonably entertaining film lifted above mediocrity by a fantastic disc and superb sound/vision. The children will have hours of fun with all the games and extras on here and it may help them to enjoy the movie that much more too. Adults will find plenty to amuse them too and I defy you not to laugh out loud to at least one of the jokes within. Robots is definitely one to watch, but questionable as to being one to keep. Maybe the extras will sway you!