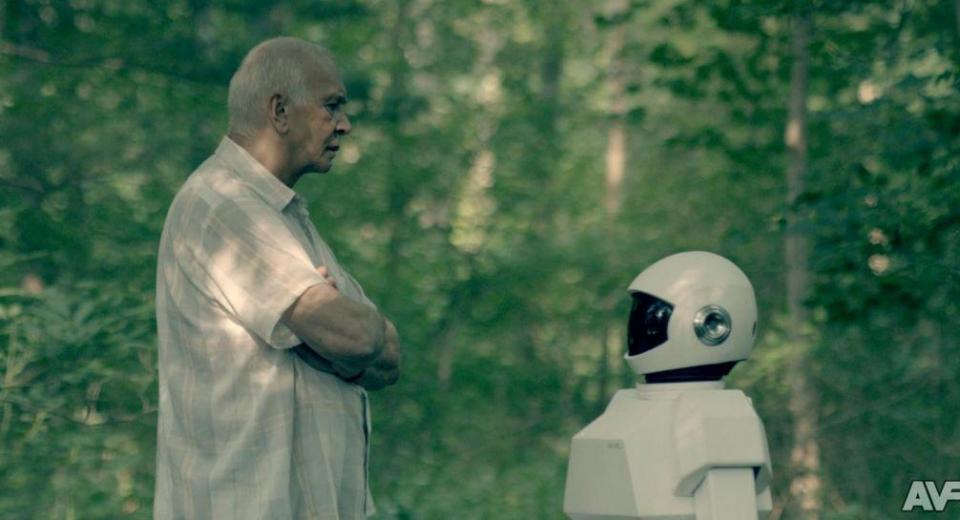 Robot and Frank is a humorous and heartwarming buddy movie that explores some difficult themes such as identity, family and senility, but it does it in a unique and refreshing way. It is wonderfully filmed and, despite tackling some tough subject matter, always manages to keep a playful air, giving the film a breezy, luminous quality. The narrative has a loose sci-fi setting but it never gets in the way of story, and serves to create an entirely believable backdrop on which to deliver its high concept – an elderly man, struggling with his failing memory, is given a robot companion to help him cope and adjust to his gradually increasing daily difficulties, but in whom he soon finds the perfect partner in crime.

Set in the near future, Frank (Frank Langella), a retired jewel thief, lives alone in the sleepy town of Cold Spring, New York. He splits his time between moping around his house in a mild state of confusion and visiting the local library. It is here that Frank seeks out the company of Jennifer, the librarian played by the ever brilliant Susan Sarandon. The two flirt with a nervousness and awkwardness of love struck teenagers, which is played effortlessly by the pair. There is a sweetness between them, and an on screen chemistry that is unmistakable. Besides visiting the library to see Jennifer, Frank's other pass-time is stealing whatever he can from shops in the local town (where, incidentally, he isn't very welcome). It's not the items, it's the exhilaration of the act, and because he has no desire for these items, Frank is able to justify these petty thefts to himself.

Frank's wife is long gone and his children, played by James Marsden and Liv Tyler, are both preoccupied with their own lives and, while concerned, see their father as something of a burden.

Frank does not see the need for anyone to take care of him anyway, he's quite happy with his little routine and has strongly resisted his children's desire to put him into a care home. It's Hunter, played by Marsden, who bears most of the burden of his father's care, with his sister working out of the country. He visits weekly, finding his father surrounded by trash and half eaten meals. Hunter struggles with this – he finds it difficult to see his Father live like this and does his best to cope, but for Hunter, the long drives and the time away from his own young family is getting too much and so, he has come up with the ideal solution.

On his weekly visit to his father, after finding him wandering towards his home in the middle of the road and once again finding his home in a terrible state, Hunter proudly unveils his gift; a robot helper designed to monitor and adjust Frank's daily routine to get him back to full health, and to help him cope.

The Robot, modelled on the world famous Honda ASIMO, is small in stature, resembling a child in a spacesuit and giving up nothing of its feelings behind the polished and faceless black of the helmet's visor. Incidetnally, the design of the robot was actually incepted by Alterian, a Los Angeles based effects company most famous for their costume designs for Daft Punk - I can see the stylistic giveaways for sure!

Frank's first reaction is, not surprisingly, one of anger and frustration. How dare Hunter dump this robot on him, which he doesn't need, so he can shirk his own responsibilities as a son. Frank see's his independence as his own responsibility anyway. He's as stubborn as a mule, but Hunter insists.

Things go from bad to worse as the Robot disrupts Frank's preferred routine, replacing his favourite children's cereal with grapefruit, and seems to take delight in announcing to Frank that it is “time for your enema”. The two could not be more ill suited and Frank would rather switch the damn thing off than put up with it any longer.

Robot is wonderfully and calmly voiced by Peter Sarsgaard. His restraint in the performance accentuates the implied patience he has for the rather aggressive and untrusting Frank, but it is when Frank stumbles on the Robot's willingness to help him steal, that Frank starts to have a change of heart. He starts to see the Robot as less of a carer, and more of a partner in crime. He quickly puts the robot to work, training him to pick locks and learn the security patterns and weaknesses of well guarded buildings.

The Robot is encouraged by Frank's enthusiasm, and sees his planning of a risky heist as just another way to keep Frank engaged, and get him on the road to recovery. And so, he agrees to help.

Sarsgaard's deadpan delivery, in contrast to Langella's brash wordplay, is a fantastic combination, and creates some truly memorable moments, especially when the two are bickering like they are lifelong friends. As their heists become more elaborate and more risky, their friendship continues to strengthen. This blossoming partnership becomes all the more apparent in a surprise visit from Frank's daughter Madison. She disagrees with using robots as slaves and so switches him off. Frank is clearly distraught and, again in a childlike manner, throws a tantrum to make Madison's life as difficult as possible. She is resolute, but in a touching moment, Frank explains that the reason he wants the Robot to be switched back on is simply because they are friends. It is here that he shows a true vulnerability and demonstrates the closeness of the unlikely couple.

Ultimately, Robot and Frank is a movie about memory, and how intrinsically it is tied to who we are. Frank desperately clings onto his memories of a colourful and dangerous life in which he has stolen rare jewels worth millions from seemingly impregnable fortresses, getting the money and the girls. As the memory of these things slip away, he becomes less of the man he remembers, and the resultant depression and confusion is obvious to all around him. Indeed it's when the film delves into Franks denial at losing his memory, and how Frank so heavily associates his own identity with the things that he has done in the past, that the movie really shines.

There's a moment between Frank and the Robot, in which the Robot talks of his fear of having his memory wiped, that the story touches on one of its main themes; how our memories define who we are. Frank holds tightly to his memories, and becomes angry and frustrated when they fail him. In contrast, Robot is willing to give up his memories entirely to save Frank the possibility of getting in trouble. It's in this sentiment that the movie finds some of its most tender scenes.

Though this is his first feature film, director Jake Schreier demonstrates that he can handle this delightfully humorous and yet poignant script with a level of flair and delicateness that belies his youth and relative inexperience. He is definitely one to watch in the future but, whatever he does, he can certainly be proud that he has made something truly unique and heartwarming with his first outing.