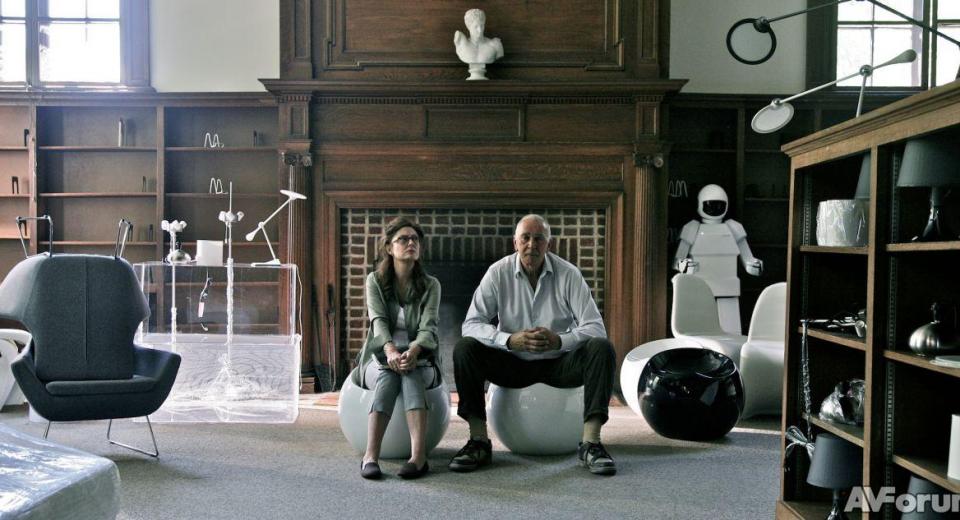 Robot & Frank lands on our screens with a truly impressive 2.40:1 AVC encoded transfer on a Region B locked disc. It's very difficult to find fault with this video presentation, but believe me, I did try.

What I found was that it's incredibly sharp, offering brilliant fine object detail. No edge enhancement whatsoever, but still it boasts crisp lines. Skin tones feel natural and extremely detailed. Blacks are rich and inky, with no signs of artifacting or crush which can often be an issue when blacks get pushed hard. Also, as the movie has a lot of scenes in which the subject is very shadowed, I was glad to see that the shadow detail is excellent too. Even at a distance in the dark, it's possible to see the folds in clothing and such like, and it's not at the cost of cotrast either. Noise doesn't enter into the equation either - in fact, I'd go so far as to say it's practically devoid of any grain whatsoever - something that those of you who love a brilliantly clean image will be pleased to hear.

The colour palette for the movie is varied, but has a consistency to it that binds the image throughout. Largely we're seeing a subtle hint of greens coupled with the warmth of oranges - it works extremely well. As far as photography goes, Matthew J. Lloyd does a pretty stand up job, seeming to prefer mid distance to wide and long, which it feels like he actively avoids. On the whole, everything seems to compliment each other, and it all goes towards making an excellent video presentation that, as I said early, I struggled to find fault with.

With a confident and intelligent DTS-HD MASTER 5.1 audio track to bolster the great movie and the brilliant picture quality, you're really starting to struggle to think of reasons not to buy this disc by now.

Dialogue is clear and precise and occupies the centre channel predominantly. The sound design seems to focus on the camera's subject for the most part, meaning a lot of the foley and such like is confined to the centre channel, but before you start to worry about this, it's not a bad thing at all. The sound design opens out brilliantly to engulf you in sweet servo's and rich ambiences where required. There's plenty of high frequency detail, and there's a comforting amount of headroom with it's dynamic range, meaning that the loud parts have room to live in the mix comfortably without the need of heavy ducking or compression.

As I said, it's a delicate treatment, and for the subject matter it's quite a masterful approach. It was never going to be mind blowing, but it does more than it needs to, and it does it extremely well.

Relatively light on additional content here, I had hoped for more. Let's take a look -

Audio Commentary with director Jake Schreier and Screenwriter Christopher Ford
This is quite an interesting commentary; it turns out the pair were at film school together and the idea for the movie began back in 2002. Took a while to get off the ground, but, as I'm sure you'll agree, it's been worth the wait. The commentary is at times quite busy and gets in the way of the movie, but it's decent enough.

Interview with director Jake Shcreier and Frank Langella
Pretty self explanatory really - it's a 5 minute interview with the star and director discussing the movie and the characters. Langella is charismatic and cheeky, especially when he chastizes Schreier for continually referring to Frank as "...this old man". Well worth a watch.

Trailer
Exactly what it says on the tin.

An absolute must-see little gem. This charming and heartwarming tale of a lonely, elderly man who finds freindship in a robot companion is gutsy and confident in tackling some difficult subject matter. The story is unique and very cleverly woven, and with a blindingly good performance from Frank Langella and an innocent and simple portrayal of loyalty from Peter Sarsgaard's Robot, it all comes together to create a wonderfully rich and engaging story that'll stay with you for a long time afterwards.

The Blu-ray package is eye catching with a nice slip cover and a single Region B locked disc that boasts fantastic Video and Audio presentations. Slightly light on the extras front, but this didn't seem to generate a lot of ire from me, largely because the movie is fantastic, and it looks and sounds exactly how it should do - Perfect. Highly recommended.