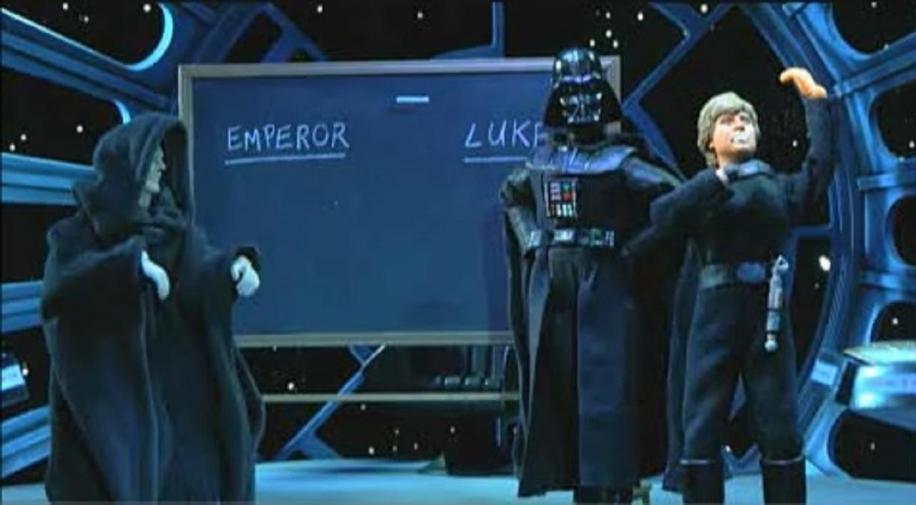 Not long ago in a galaxy not far enough away ...

Out of the blue comes Robot Chicken: Star Wars for review! Not on Blu-ray, alas, but good old DVD … who remembers that then? I know that it has been out for a while and that most of you glancing at this will already be very familiar with it, but here we go, just the same ...

Running for only twenty-three minutes, Adult Swim's gloriously outrageous take on The Bearded One's mythic franchise effortlessly trounces the surprisingly disappointing Family Guy spoofs by being genuinely original and, get this, actually very funny. No, scratch that. It's hilarious. Robot Chicken has long lampooned, buffooned and skit-ooned movies, celebrities, music, television and all manner of pop culture with their crazy animated action figures, becoming a true cult phenomenon in its own skewed and satirical right. Under the devilish auspices of creators Seth Green and Matthew Seinreich, the holiest of SF enterprises came under maniacal attack way back in 2007. The most remarkable thing about the project, of course, was that it received full backing from Lucasfilm, with some of the original cast members – Mark Hamill, Carrie Fisher, Ahmed Best, Billy Dee Williams etc – and even, in this first instalment, George Lucas, himself, lending their vocal talents to the little figures unleashed in warped stop-motion animation through an irredeemably zany version of the universe that they helped create. Endlessly re-watchable and chock-full of oh-so-quotable lines, this is, dare I say it, possibly even more fun that the films themselves!

“Oh, oh, oh … I'm sorry … I thought my Dark Lord of the Sith could protect a small thermal exhaust port that's only two metres wide! The thing wasn't even fully paid off yet! Do you have any idea what this is going to do to my credit?”

The show doesn't follow any strict linear narrative. It is merely haphazard sketches strung together with the odd running gag cropping up throughout. Some are so slight they are virtually subliminal, others are much elaborate. Famous scenes are lined-up and shot down, of course, but the essence of Robot Chicken's naughty assimilation process of such well-known material is in the removal of the films' gravitas. Lucas strove to have his galaxy concocted from a nuts 'n' bolts realism of everyday space-travel, but Green and his writers ensure that tyrannical Empires, idealistic rebellions, and all the death and limb-lopping that such a conflict entails are dumbed-down even further. It is part sit-com, part anarchic stuff … and it is all fabulous.

Although everyone, including those penile space-slugs, gets a bite of the pie, the stand-out characters in both instalments are definitely Boba Fett and Emperor Palpatine.

Voiced by Brecklin Meyer, everyone's favourite bounty hunter lives up to his “reputation” by being exceptionally cool and so far up himself that he can disappear up his own, ahem, thermal exhaust port. Just watch him taunting the carbonite-frozen Solo, and then taking his dominance over his helpless nemesis to a whole new level. “Ooh, you like that, don't you, Solo?” he says getting a little close for comfort. “Just beggin' for a little piece o' Boba. Yeah, you like it 'cos you're bad. You dirty little smuggler ...” Fett would go on to feature in some of the funniest sketches in Episode II (reviewed separately), but his Robot Chicken-isation commences here and it is a stunning evocation. But if Boba becomes the wildest jazzed-up badass in the show, it is Seth MacFarlane's Emperor who steals it from him with possibly the most exposure and probably the most consistently smart dialogue. Giving Vader flack for losing the Death Star to a bunch of hippies and an “Aluminium Falcon”, losing in a “Yo' Mama!” contest with a bitchin' Luke Skywalker and bartering unsuccessfully with the builders of his new battle-station he is the epitome of frustrated villainy. MacFarlane channels the Stewie Griffin voice into the Dark Lord with refined contempt and a perpetually exasperated nobility. Nothing he does ever works out and it is to the show's credit that the most Moriarty-like shadow-character from the films (and, if we are honest, possibly the most boring across the franchise too) becomes the person you just want to see again and again. Like Boba, Palpatine would enjoy a great deal more screen-time in Episode II's frankly much superior outing, but with such a great caricature as this, the guy could even have his own show.

“Well you can just get your seven-foot-two asthmatic ass back here, or I'll just tell everyone what a whiny bitch you were about Parda-marmi, or Panda-Bear, or whatever the hell her name was!”

You've got to love the intentionally clumsy bleeping out of the F-bombs, leaving you totally aware of what has been said, especially when Palpatine first gets news of the destruction of the Death Star. And it is great that the writers choose to expand on the many peripheral characters and not just concentrate upon Luke, Han and Leia. That said, though, the moment when Ben Kenobi takes advantage of poor Luke during his makeshift Jedi training with the blast-shield down on his helmet is priceless. For one second, I thought we were going to have some of that Family Guy old-git paedophilia taking place, but even if Kenobi still goes for Luke's cojones, there would be few witnessing the ball-crushing deed who weren't secretly in admiration of seeing young Skywalker doubled-up on his knees in agony. The show doesn't just target the much-loved saga itself, but it aims for the super-fandom that surrounds it. Such as the Sid-the-sloth-voiced geek with the home-made Tauntaun costume who saves the mighty George Lucas from a horde of rampaging fans and gets him to his convention speech on-time by giving him a piggyback … “And I thought they smelled bad on the outside!” Bum-bum!

And then you've got Admiral Ackbar's Cereal commercial. “It's a trap! Your tongues can't repel flavour of that magnitude!” The leading light of the Mon Calamari gets a couple of choice moments over the two episodes, but this totally off-the-cuff fake-ad is terrifically infectious – look at him dancing in the background. You have to feel for the poor janitor who ends up sweeping corpses off the deck wherever he goes – Darth Maul, Mace Windu, Sidius - but it is great to see that daft blue elephant synth-jazz player from Jabba's sail-barge, Max Rebo, getting his own greatest hits album and a duet with Joey Fatone. Two of those cosmic worms who love to hide out on asteroids and pretend their mouths are caves sport fabulous Midlands accents (courtesy of Green and Meyer) and resort to ordering takeaways when they miss a Millenium-sized titbit. Those curiously alluring multi-coloured singers from Tattooine add pole-dancing to their repertoire, and you can also revel in the elaborate production of “The Empire On Ice”, the song 'n' dance routine blasting along with lyrics crazily shoehorned-in to the saga's famous fanfares. George W. Bush even gets the treatment when the world renowned idiot comes under the belief that he has Jedi powers, his Force-addled ego-trip even incurring the wrath of a reborn Abraham Lincoln (voiced by Hulk Hogan of all people!) who confronts him in a lightsabre duel, but this is about the only sketch that seems sort of out of place amidst the grand scheme.

The lengthy cantina sequence in which we get to see a completely alternative take on the ramifications of poor Walrus Man, or Ponda, losing his arm to Kenobi's lightsabre - “Come on, one drink ain't gonna kill ya!” - is sheer genius, and a truly inspired revision of the events that we see in the film. A Death Star orientation course (tutored by Malcolm McDowell in clipped semi Basil Fawlty voice) for all those Nazi-like commanders shows us how these usually inept goons have to have contingency plans for when they inevitably screw things up for Vader and have to then suffer the consequences of his Dark Side anger. Han Solo discovers that blagging about a reactor-leak in the detention block is not going to convince anyone who has the Death Star blue-prints to hand. Darth Vader finds that even blasting the annoying Jar Jar out into the depths of space, Alien-style, will not free him as the Gungan pest returns as a hologram - “Mesa all blue and sparkling!” And some Jedi butter-fingers also reminds us of Alien, when a dropped lightsabre causes untold chaos as it melts its way through a dozen steel decks in a scene similar to the first xenomorph's acid-blood sizzling through the Nostromo.

To spoof something so remorselessly and so brilliantly, you have to love it first. And this is why Robot Chicken: Star Wars succeeds so fundamentally. The knowledge of the set-ups, the scenarios and, essentially, of the characters is unparalleled and this just means that the scope for exercising wit is far grander and imaginative than a mere mickey-take. Plus, it means that they can get away with much more, having won over even the most stubbornly defensive of fans with such innate knowledge. Family Guy's playful stabs at Star Wars in the one-off specials have fallen down because they stuck so rigidly to the plots of the films and didn't allow for any deviation, speculative asides or “what ifs” tying themselves down with unnecessary parameters. In the proper series of Family Guy they pay numerous little homages to the movies and these work far better because they are abstract and place characters in different situations than those we are familiar with. Robot Chicken recognises this and builds upon the strategy by thrusting such well-known galactic celebrities into diverse, inverted, corrupted and downright ridiculous little set-pieces all the way through – and this guarantees that they take more than just a first step “into a wider universe” and that they do so in such a warm-hearted and affectionate manner that it would be impossible for even the most devout Jedi to be offended or aggrieved by any of it.

“And the Force? Well that's just microscopic bacteria in your bloodstream called Midichlorian ...”

“Look, if you're not gonna take this seriously … I'm outta here.”

The writing is rapid and acerbic, the performances allowed to blast off into improv, and the animation is spellbinding … well, that's spellbinding in an irresistibly goofy sort of way. The Chicken-crowd leap about with gymnastic gusto, little articulated hands and arms flapping and swivelling about, the dynamics of each situation softened by the fuzzy-felt clothes they wear like those of little peg-style vintage dolls. The plasticated cartoon faces that become so expressive are the crowning glory of these rogue characters. Whether it is Walrus Man brushing his tusks in the mirror or the Emperor sending the bleep machine into a frenzy, or Boba Fett removing his helmet to swoon with dark Kiwi clone-appeal at the captive Solo, there is a real sense of some insanely delinquent alchemy at work here. Like Pixar made you wonder just what your toys were getting up to once your back was turned, Seth Green and Co. arouse some serous suspicions about that collection of Stormtroopers, Bounty Hunters and Imperial Officers you have hidden away in the attic. And with this in mind, the success of Robot Chicken hitting the big time with Star Wars has probably given impetus to a lot of people creating farcical You-tube sit-com routines for their own action figures.

Folks, this is incredibly good stuff that tickles the ribs with unceasing determination! The repeatability value is second only to the expanded Episode II instalment which is, admittedly, much better again … and since Star Wars is so deliciously easy to send-up anyway, it is refreshing to see it done with such flair and imagination. Horribly short running time aside, Robot Chicken: Star Wars is very highly recommended.

The Force, for better or worse, is strong with this one!