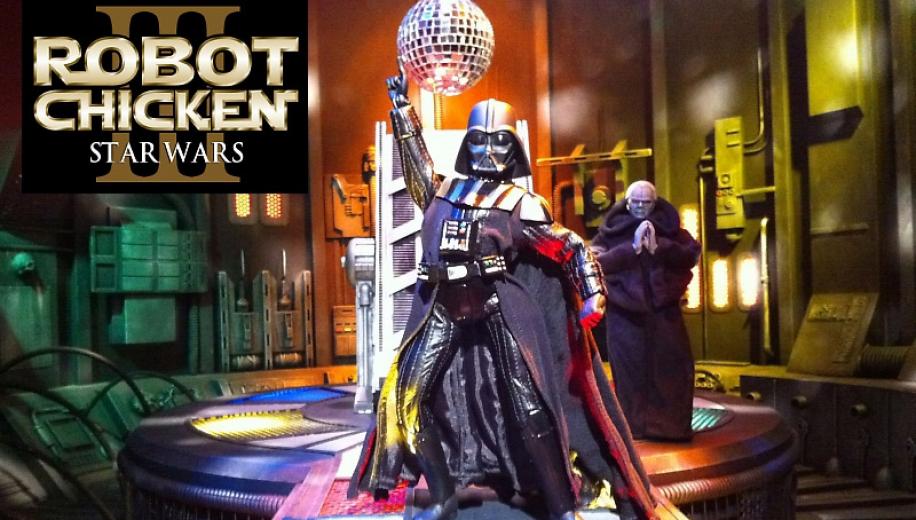 “Oh, you stuck around. Great! You didn't miss the visual treat of my frozen corpse floating, naked, in a vacuum. Just what Mama Palpatine dreamed for her little boy. Sorry, ma!”

This review is for the UK DVD of Star Wars Robot Chicken Ep III. There is a Blu-ray available which, ordinarily, I would not have believed would be able to offer much of an improvement given the source material – but then the colours are exactly the sort of thing that would probably benefit from the hi-def makeover, even if added detail or depth weren't things you would necessarily expect to find. I would certainly like to see the BD version though, given that this SD transfer has some rather glaring issues. In the main, these issues are centred around the compression artefacts which really bubble away at the 1.78:1 image of this check disc. The picture is awash with energised pixels that festoon the edges of characters' faces. There is the dreaded banding taking place that sees clouds undulating within the more saturated areas. Edge enhancement wasn't a problem for me and, on the whole, this is the sort of rough 'n' ready material that most people can probably live with. It's not live-action and nor is it traditional or CG animation. It is deliberately clumsy and “jerkified” … and this is part of the appeal.

On the plus side, this is one extremely vibrant show, folks. If you can imagine Dario Argento and Joel Schumacher in full Suspiria and Batman And Robin mode getting unleashed upon a world of Star Wars figures, then you've pretty much got the measure of how this looks. Explosions are bright and organic, the costumes (all plastic and cloth) are vividly rendered and the little sets are bold with hues and shades. There's nothing wrong with the definition of the characters. Armour, joints, animated grins etc. are all brought to a welcome acuity. Fast motion can occasionally be fuzzed-up, but I think that this just goes with the territory. Black levels are very good, with keen shadow depth and darker elements that don't seem grey-infiltrated. Contrast is equally fine, although there is a Hoth sequence with the gutted Tauntaun that ignites the whites until they positively scorch.

Overall, I would have to say that the show, here, looks reasonable enough for those non-discerning types, at any rate. “You're thinking of eating me, aren't you? I'm thinking the same thing, muthaf*cka!!!”

Revolver ditch the DD 5.1 track that had been familiar to earlier releases and bestow a lowly 2-channel stereo mix to this colourful outrage that does what it can with the good old Ben Burtt bombast and SF finesse. Well, their reinterpretations of it, anyway. But it only just about sounds okay. There's lots of lasers, explosions and impacts to liven things up, but the resulting audio is thin, restricted and lacking in the necessary oomph. Why do we need oomph when this is only supporting a bunch of Star Wars figures prancing about? Well, the show is full of effects and to go along with the visual representation of that galaxy far, far away we really ought to get something with a bit of wraparound dexterity to it. The music, especially the disco-versions of the Main and Imperial Themes, and the moment when Gary battles to avert a collision between the Death Star and a planet that just happens to be in the way, are full of energy and width, but this still sounds very enclosed and bereft of dynamics.

A definite mistake was in keeping the THX sound-rush accompanying the arrival of IG88's cousin only in stereo. I mean here was a Lucas-given moment that could really have whooshed through a full surround track in style. Dialogue, on the other hand, comes over very well, so there's no hiccups with the verbal side of things, and let's face it, this is the part that matters most in this show. Another good slew of supplemental material furnishes the disc, running along very similar lines to the first two releases. I know that the US BD actually has a couple more exclusive additions but … c'est la vie.

We have some great commentaries (four of them with lots of actors, writers and animators taking a turn), lots of deleted scenes complete with funny introductions and animatics (check out Boba's Temper, which is just hysterical and really should have made the final cut, as should his blind dinner-date with the big blue, six-boobed dancer), featurettes that look at the love of Star Wars action figures and merchandise, and the love of the films, themselves, a gag reel (which is surprisingly naff to be honest), a piece about the writing of the show and another about how the team view the filmmaking process and how they got into the business. Then there is a nice little section that shows us the vocal performers going about their side of things. All of these brief featurettes are quite zany and off-the-wall, the creative team as well as the actors having such a ball that you just wish you get involved.

Seth Green sets the agenda in the Q&A session that places him, along with Senreich, Tom Root the exec producer and head writer and vocal actor, Joey Fatone, on stage in Yoda-eared hats when he asserts that Robot Chicken doesn't get permission for anything because it is just easier to apologise afterwards. Towards the end of this jovial session, we meet Todd Grimes who will directing the new Lucasfilm animated comedy that Green is working on.

We also have 25 minutes of the Robot Chicken Skate Party Bus Tour that is previewed at Comic-Con, which is just a big load of fun for the creative team. There's costumes, hijacked interviews, bus journeys, parties … and, of course, some skating. Just more addictive silliness.

And, as usual, we get the premier of Star Wars Robot Chicken III at Skywalker Ranch with footage of the crew all heading off to the Promised Land and then enjoying Seth Green's playful introduction. A handy digital arrow points out George Lucas in the merry throng. And then we hear the reactions of the crowd afterwards as they enjoy the hospitality of the Beard. But the thing that fans will possibly like all the more is the 10-minutes that we can spend on a Sunday In The Boardroom With George Lucas, in which the writers and producers sit with the filmmaker and discuss, very non-seriously, the phenomenon of Robot Chicken's invasion of the Star Wars universe. It's good, if extremely irreverent stuff.

Great fun if you can put up with the nonstop adolescent behaviour of the makers. But then, if you couldn't, you wouldn't be watching Robot Chicken in the first placr, would you? It's another winner from Adult Swim's Robot Chicken. Seth Green's stop-motion animated lampoon funnies-up the Force with a perfect blend of vocal talent, inspired set-piece buffoonery and Star Wars-savvy writing. As usual, the two clear standouts are Boba Fett and Emperor Palpatine. Seriously, it is impossible to watch the films now without imagining that these two characters are thinking the thoughts that spiral out of control in these glorious spoofs.

Again, the amazing thing is just how much personality is injected into these crazed figures and the potential for a full-length feature film is surely a mouth-watering notion. The new animated comedy show is hinted-at in the plentiful extra features but, by far, the best of the supplemental material is just to be found in the never-ending antics of the creative team, themselves. Oh, and those wonderful deleted scenes – once again, that arrogant Mandalorian rogue steals the show even here.

The whole package is tremendously entertaining and definitely comes recommended.