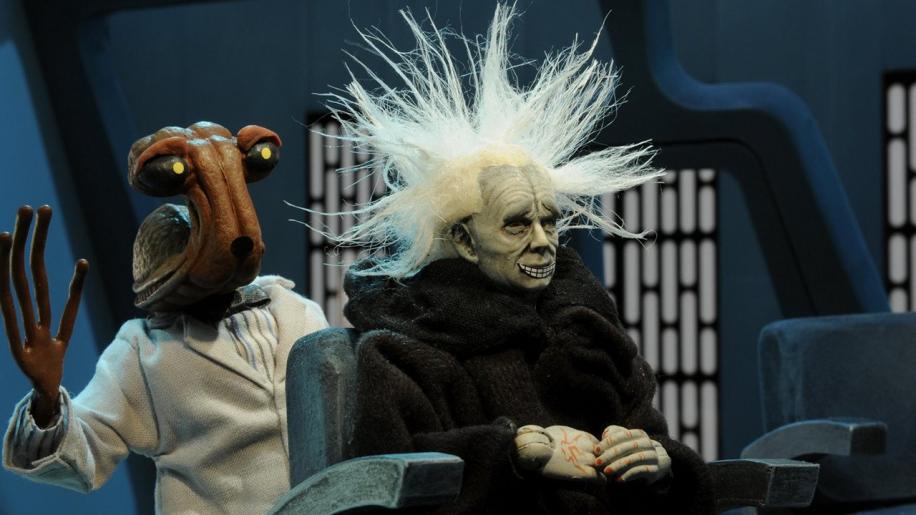 Adult Swim blasts out of hyperspace with Robot Chicken: Star Wars Episode II, in an expanded limited R2 edition with full THC certification … that's Totally Hilarious Chicken – digitally mastered for superior spaced-out entertainment. This instalment is better by far than the first episode, which was brilliant to begin with. Seth Green and Matthew Seinreich and their usual writers and animators return to a galaxy not far enough away and proceed to disembowel SF's most beloved franchise with even more wit, imagination and eye-popping gall than ever before. With the running time for this specially extended version increased to 38 minutes from the earlier 23, fans can get an overdose of lightsabre-sharp satire and merry Midichlorian mickey-taking. The “Broadcast Version” is here too, but why settle for that shortened incarnation when you have the meatier option?

“Oh, what? Did the eighty-year-old man you just met yesterday die? I mean sorry if I didn't notice, but I was a little busy thinking about my entire family and the other two billion people from Alderaan that were just vaporised into dust about three hours ago!”

Princess Leia puts things into perspective for the miserable Jedi-wannabe.

The two superstars from the first episode – Emperor Palpatine and Boba Fett – really come into their own this time out, further blurring the line between spot-on characterisation and souped-up ego-inflation. Palpatine seems to have even worse luck than last time around, and Fett just soaks up his own uber-confidence and spits it back at us with scenery-chewing gusto. Palpatine has to have his shock-locks done by Alfonso, his hairdresser, played by the Cantina's French-accented Hammerhead, after the stress of Vader's continued ineptitude plays havoc with his bleached-out follicles. He spills coffee in his crotch - “Like dunkin' my wang in hot lava. Something you'd know all about, eh?” he says to Vader with a sly taunt. He loses his bags on the flight to the new Death Star, then loses himself within its half-completed warren, and finally discovers that the seating arrangements in his supposedly improved battle-station leave a lot to be desired. But the day that he chooses to torment Luke Skywalker with Force bolts in front of Vader surely can't get any worse, can it?

Rapid-fire gags and subverted situations follow on in the same irreverent and illogical fashion as they did the first time around, but even if the animation is still as daft and whimsical, the humour is stronger and more cutting. The whole thing feels smoother, more focussed, as though the writers realise that having gotten away with so much already, they can relax and push the envelope a little bit further now. But this time around, I think that they clearly outdo themselves with a few exceptionally amusing pieces.

For a kick-off, the gang come up with a sketch that I simply cannot watch without ending-up either in convulsions of hysterical laughter, or parroting stupidly along to. And, frequently, it can even be a messy combination of the two. Picture the scene – we're deep inside the belly of the Sarlacc with the poor Skiff Guard who has already taken the plunge when, all of sudden, the greatest and most feared bounty hunter in the galaxy tumbles down, head-first. Boba, of course, just cannot let on that someone of his mighty calibre could have wound-up in such a predicament without it having been intentional on his part. “WHHOOAAA … meant to do it!” he announces proudly after a fabulous splat-fall and begins to prance about re-enacting what he “claims” happened up top, totally enthralling his fellow gastro-inmate. “I was flying around on my jetpack, smokin' rebels with my laser - Ba-boom! Ba-boom! Ba-boom!” Brecklin Mayer, voicing Fett, is on terrific form. “Wow,” says the Skiff Guard in total admiration for all of these bogus exploits that Boba spills, “at least you didn't go out like a punk.” “No,” replies the Fettster, as he hops from foot to foot, trying to choke back the tears. “Like a badass.” Honestly, folks, it's absolutely inane, but once you've bought into it, this is utterly superb. We all know how cool Boba Fett is, but we also know that, in the films, he's also a bit crap. Robot Chicken recognises this, and, with the exception of the above scene, builds him up into exactly the wise-cracking super-jock that we all want him to be. He even gets the girl at one point – Princess Leia in skimpy gold bikini, no less, who fawns over him after a delightful massacre of Ewoks!

“It's like that stripy bag is mocking me … F*ck you, stripy bag!”

We get to meet the rest of the bounty hunters this time out. The big reptilian Bossk goes disco-dancing and finds himself in a bit of a Club Obi-Wan (Temple of Doom) situation, yet surprisingly still proves himself to be as tough as we always thought he was, even putting the nut on his intended bounty - “You just got Bossked!”. 4-Lom and Zuckuss fake their career credentials to get the prestigious “hunt Solo” gig. Totally inexperienced, they still promise to always get their man. Oh, and Wookiees too. Bizarrely bandaged Dengar gets some wacky exposure, his otherwise anonymous cameo expanded considerably into the role of an effeminate Southern dandy with an irritating motormouth. Whereas the first episode didn't have anything in the way of a continuous thread, Episode II does with the recruiting of these guys and their various attempts to capture the Millenium Falcon. In fact, Seth Green provides them with more back-story and relevance than George Lucas ever did, proving once more that the fans, in some cases, know best.

When Mon Mothma commits a dreadful faux pas in a restaurant by ordering the calamari in front of her date, Admiral Ackbar, the squid-head retaliates exquisitely with “Well I'll go for the insensitive bitch … with a side of f*ck you!” when it comes time for him to order. Priceless. Stormtrooper Gary can't get out of “Take Your Daughter To Work Day”, even if the day in question happens to be when his squad ambush the Rebel Blockade Runner. Poor Gary has to duck and dive enemy lasers to rescue a teddy bear, Mr. Fuzzy-Bottom, and own up to Lord Vader about why he's got a little girl with pig-tails hanging around. But hearing his tale of woe, the Dark Lord of the Sith reveals a tender side. “That really hits me where I live,” he informs Gary and then hauls the Rebel Commander off his feet and breaks his neck. “Gary, here, never sees his daughter because of people like you!” It certainly puts a new spin on the old chestnut about those stolen Death Star plans, doesn't it?

We have a new couple moving into an apartment in Cloud City and their actions – flipping buttons and turning TV's on - inadvertently causing a few problems for the one-handed Luke Skywalker as he tumbles around inside the air vent after his tussle with Daddy. “Cloud City? More like Crap City, if you ask me,” says the bloke, thoroughly unimpressed with the lack of cable reception that their flat-screen receives. There's the revelation that after his mum has been offed by Sandpeople, Anakin has, indeed, become “Little Orphan Annie”! That once rather menacing torture-droid that is full of spiky things and needles gets his own TV show in Dr. Ball M.D., a splendid riff on 70's serials like Mannix, Quincy and Petrocelli. “She's lost the will to live?” he implores of the medical team in total exasperation when informed of Padme's critical condition. “What is your degree in – poetry? You sorry bunch of hippies!”

“Okay, who has two thumbs and betrayed his best friend? This guy!!!”

Lando tries to break the ice at an Imperial banquet to celebrate the capture of his “rebellious” friends by owning up to a little spot of jovial backstabbing.

Just sit back and enjoy the above quoted scene of Han and Boba trying to outdo each other with rude hand-gestures (you're not going to beat Boba, though!) However, it is Vader who wins the day with his mimed performance of the destruction of Alderaan, and by suddenly breaking the awkward silence that ensues by happily informing his prized captives that he's “got a whole lot o' torturing to do,” and playfully acting-out all manner of hideous depredations that he's going to do to them.

Vader has some fun at Lando Calrissian's expense too. That deal the Cloud City honcho agreed to with the Empire appears to have been altered to allow for some hidden clauses – like riding a tricycle, wearing a bonnet and dress and a pair of clown shoes and answering to the name of “Merry”! He'd better pray that Vader doesn't alter the deal further. Make sure you watch the stormtrooper in the background as the scene unfolds. But Vader gets some stick of his own, as well. Having Artoo shut down all the garbage compactors may save our heroes' lives but it's going to play havoc with the remnants of Darth's fish-supper. He is also forced to apologise to Grand Moff Tarkin for falling for Leia's ruse about the location of the Rebel base and blowing up Dantooine, home of the Tarkins. “Vader! You've even been to my house for cocktails, for Christ's sake!” And how about the epic dressing-down that he receives from the hologram of Palpatine? “Can you see this?” asks the maddened Emperor as his blue shimmery image flips the prostrate Vader the bird. A passing Imperial Officer even stops to snap a piccie of his scarred visage during that sentimental moment when he wants to see Luke with his “own” eyes, no doubt to go on the Imperial You-tube later that night.

Where the first instalment had the “Empire On Ice” dance extravaganza, this one has the brilliant musical number “From A Certain Point Of View” sung by Obi-Wan and Yoda to a Luke who has just cottoned-on to the fact that practically everything they have told him has been, well, economical with the truth. We get racing AT-ATs, a grievance claims firm that specialises in victims of Jedi limb-lopping, a tragic personal history for an Ugnaught with butter-fingers, Chewie doing a Fonz impression in the mirror and, quite sensationally, a clever “what if?” extension for the classic “Luke, I am you father,” scene – in which we cut to a cute montage of father/son bonding that takes in tips on how to shave with a mini-facial lightsabre and Luke learning to ride his first speeder-bike. Zany and anarchic, yes, but there is something peculiarly touching about this sequence too.

“What is thy bidding, my Master?”

“My bidding? Well how about I bid you stop ramming the ship into f*ckin' asteroid fields!”

Episode II sees the writers actually having a few more actual “pops” at Lucas and his narrative skills. We are reminded of the idiocy of a star system composed entirely of geographically themed planets. The Clone invasion of Geonosis becomes the long-delayed occasion when Yoda's back-to-front grammar is finally pulled-up – a ferocious ground assault depends on cracker-jack timing and clearly understood commands. “Around the survivors a perimeter make,” is not the way to do it. And those bloody Ewoks get what they deserve – first from Big Bad Boba who has a right old time frying them with all sorts of weaponry including a pair of lightsabres - “Ooh, red and blue … put 'em together and … purple rain, baby!” - and then from the falling debris of the Death Star that they helped destroy.

Classic stuff all over again, folks. How you can't have a great time with this is beyond me. Better than the first Episode, this comes even more highly recommended!