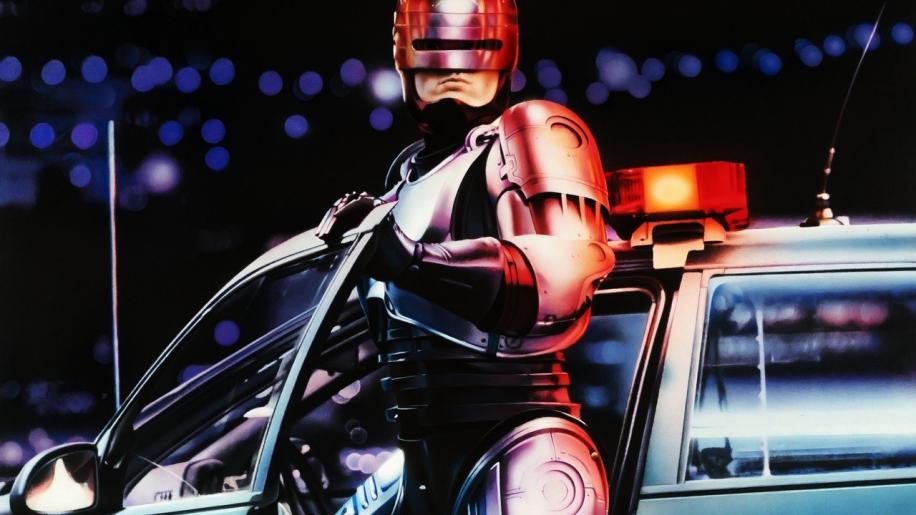 Robocop has had a rocky road on its way to Blu ray. Originally sent out to reviewers in August last year, the resulting furore about the transfer led to the release being cancelled. Now, the disc is being re-released with a new transfer, new sound mix, and the full unrated cut of the film.

My normal reviews start with a paragraph or two explaining the plot - but who really needs reminding about the story of Robocop? This tale of a cop murdered by a criminal gang, and turned into the ultimate law enforcement agent is surely well known by now. So, I will skip the preamble and move on quickly.

Robocop was Paul Verhoeven's first entry into Hollywood after the excesses of his Dutch output got him noticed in the land of dreams. What is extremely noticeable looking back now, is just how much of his vision the director injected into this tale. Many directors new to Hollywood may well have bowed down to political correctness and a “safe” movie vision. Verhoeven makes this his own right from the very beginning and in the process blasted his style onto the cinema screen with a searing intensity.

The result is a film that really pushed the boundaries back in 1987. Using extreme violence and gore, over the top action, and very clever cinematic techniques (advert breaks and news broadcasts) the film manages to rise above it's comic book ideas and become so much more. This is a film that digs below the surface to reveal the turmoil of the central character Murphy, as well as managing to take digs at corporate greed, and the excesses of middle America.

As well as the amazingly assured direction of Verhoeven, the film is underpinned by an excellent performance by Peter Weller as Murphy / Robocop. Covered for most of the film by acres of metal the amount of emotion he manages to convey just with his mouth is quite stunning. The scene, for example, where he finds his old house and walks around with his memory banks playing back visual recollections of his family life, is brought vividly to life by his performance.

There are some truly memorable villains in this piece too. The performances of Miguel Ferrer and Kurtwood Smith in particular living long in the mind. One criticism that may be laid at this film is that there are rather too many evil characters in the film. This does lead to a rather “grimy” atmosphere, but it does serve to emphasise the alienation of Murphy as he finds himself with only Officer Lewis (Nancy Allen) to turn to.

The special effects that are essential to the plot are really not diminished too much by time. There are the occasional bad pieces of stop motion animation, and the occasional piece of obvious back projection, but generally the special effects consist of blood spurts and mutilation - and these stand up particularly well. Of particular note is the make up of Murphy when he takes his helmet off (designed by Rob Bottin) and the Melted Emile character - which still look amazing today.

As mentioned earlier, this is the unrated cut of Robocop. This means we get a few seconds of added gore, but no extra scenes. This is Robocop as the Director intended, and it is as visceral as film can be.

Robocop is a deserved classic, and anyone with fond memories of the film will want it in their collection as it is definitely a film to return to. If you have not yet had the pleasure, then this is a film that you should definitely check out. If you have the stomach for it, then it is that rare combination. A genre film that goes deeper, with great performances, and directed with no fear.