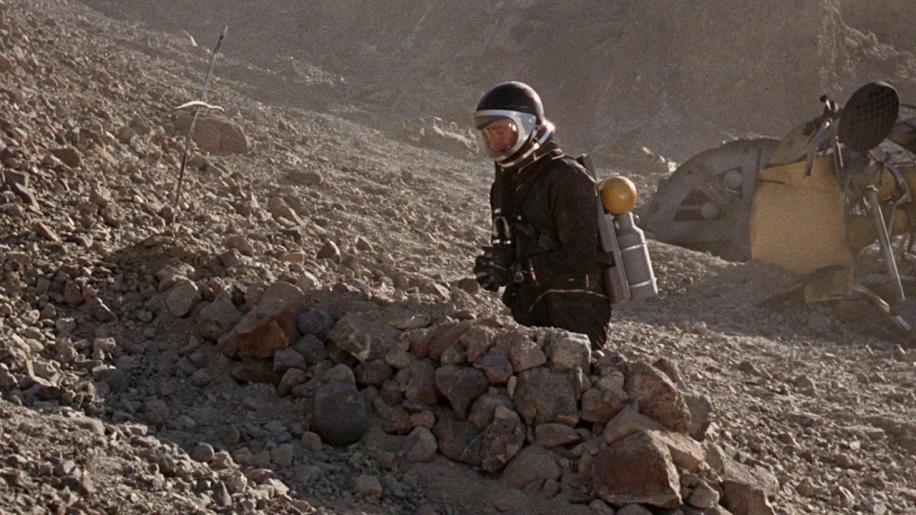 Criterion have done a wonderful job with this, folks. The movie looks simply stunning. As usual, the company have provided details regarding how this transfer was produced and how the master was restored and their painstaking work is clearly evident in a 2.35:1 anamorphic image that has rich colours, tremendous depth and a truly surprising level of detail.

Haskin's widescreen picture is often a thing of beauty. Those Astounding Tales-style Martian skies are resplendent reds and oranges, deep with a luxuriant saturation that, legitimately, needs to throb. Thankfully, these vivid hues do so without any smearing or bleeding. There are occasional shots that don't look quite as bright - Draper and Friday looking down on the ancient caves, for instance - and the film is somewhat grubbier than you might expect, with the Technoscope process being the reason for that, but overall this looks like a lurid 50's comic-strip come to life in vast scorching panels. There are some great vistas on display and it is often nice the way the disc handles the blood-red sky and the black space above the atmosphere in the same exotic matte shot.

Detail is greatly enhanced via the textured high-definition transfer. The blistered rocky terrain of Mars stands up to close scrutiny. Draper's equipment - his voice recorder, oxygen cylinders, video-camera and sidearm (a whopping big Magnum .44!) - are all picked out with fine delineation. Close-up skin texture is pore-perfect, too and the pebble-strewn ground is crisp and clear. Blacks are solid and consistent. Space scenes are deep and cave-set shadows offer nice definition. They may not be as boldly thick as more recent transfers, but they certainly add much to the atmosphere. The flames of the fiery eruptions and the bright burning orb that sets the whole story in motion are suitably spectacular and the crystalline ice-whites during the climax are clean and stark.

Damage to the print is, of course, minimal after the restoration work it has received. But there is still the odd speckle of dirt, or curling hair to be found in the picture. Grain is slight and very filmic and compression defects do not enter into the equation. Edge enhancement is not a problem, though some of the trickier matte shots may seem as though they are exaggerating it. All in all, this is a fantastic transfer that truly makes those Amazing Tales Of Science Fiction book covers spring to life.

Robinson Crusoe's mono track is a real ear-opener, folks. For those who may think that an old single-channel audio mix lacks integrity, depth and design, this is the track to broaden their acoustic horizons. With excellent fidelity and lots of unexpected detail perfectly contained within, the track sounds boisterous and active. Dialogue is always clear and whatever damage there may have been due to master track's age there is virtually no sign of it.

Bass levels are carried off well, with things such as the alien bombardment, the landing amid the inferno, Draper crashing through the rock floor of a cave etc, all sounding meaty. The booster rockets on the Elinor have weight to them and it is interesting to note that when the ship roars towards us and then rapidly away again, we hear them arrive and then recede with quite amazing dynamism. Even the fly-bys it makes as Draper watches forlornly from down below have a dedicated placement within the limited soundscape - super-sonic whooshes that energise the onscreen action. Very impressive indeed. Cascading rocks from the alien bombardment is punchy and effective too, as is the brittle noise of the laser-canons.

The score from Van Cleave is presented with warmth and occupies a nice level in the overall soundscape - never too overpowering, but always ebullient and involving. I have to say that I was really impressed with this track. It manages to place a lot of finite detail inside it that really adds to the enjoyment of the film. Hats off to Criterion's engineers for crafting this one, then.

There's quite a good little bunch of goodies on offer here, which seem to be a lift from the original Criterion Laserdisc. The first is the commentary track, which is great and packed with interesting anecdote. Featuring the screenwriter Ib Melchior, actors Paul Mantee and Victor Lundin, production designer Al Nozaki, special effects designer Robert Skotak (who acts here as the film's historian) and even excerpts from a 1979 audio interview with director Byron Haskin. Recorded separately and introduced by a moderator, the track does contain a few lulls, but they are of no consequence as the wealth of material covered is extensive and entertaining. Melchior talks about the changes that were made to his screenplay and the relative nonsense of some of the sights and situations that we see - well, quite a lot of them, actually. Haskin's recollections are good and fresh in his mind and are slotted in at appropriate moments in the movie. Oscar-winning visual effects man Skotak, provides nicely knowledgeable middle-of-the-road insight and opinion, but Mantee is excellent. Admittedly, he does tend to go on about the acting method an awful lot, but he is bursting with anecdote and personal reminiscence - including his pride at providing the first nude scene of 1964 with his Martian Jacuzzi sequence. Lundin is peculiar fun, as well ... but only brought on board once his character of Friday appears in the film. A worthwhile track.

Then we get a slightly tangential documentary entitled Destination: Mars that seeks to explore the science behind the movie, revealing not just how accurate the makers were with regards to the known facts of the time, but also how surprisingly prophetic some of their depictions actually were, as well. Naturally, a lot of the material also debunks some areas of the production too. Running for 19 mins and presented by filmmaker and space historian Michael Lennick, who wrote and presented a successful series about the space race, this is a fine companion piece to the movie.

Lennick also writes an essay on the film that comes in the form of a little booklet. For pure entertainment value, this also contains some Yargorian terms and their translations. Yargor was originally the planet that Friday was to have come from and this is a fine little addition to the film's charm. There is also a page with facts about Mars that Melchior's screenplay had also contained to help the filmmakers get their depiction accurate. It is surprising just how naïve some of the scientific beliefs of the time actually were. Such as that a human being could stay alive on Mars for longer than a native of our own tropics could exist in the Arctic, and that lower forms of life, such as insects, certainly exist on the surface!

The music video features Victor Lundin's song entitled simply Robinson Crusoe On Mars and is set to a lengthy montage of clips from the movie. Hailing from Lundin's 2000 album Little Owl, this is actually incredibly affecting. Coming across as a country and western ballad about the star of the film and how it was his destiny to finally travel to the stars, it is definitely hokey to nth degree, but there is such a warm-hearted and fuzzy aura of sentimental nostalgia about it that it cannot help but be infectious. Some of the video clips are repeated for no apparent reason, but to be honest, I loved it ... and I really didn't expect to. In fact, I can't get the tune out of my head.

Rounding things off are a decent stills gallery featuring conceptual sketches, production photos and designs, excerpts of Melchior's original screenplay and promotional material. The extent to which the original screenplay ran is vividly rendered with designs for Draper's equipment, the true Martian companion that he was initially intended to have - a dressed-up Armadillo - and there are some great artist visualisations of the alien landscape, including some composite test shots of the Death Valley rock formations and canyons.

All in all, a rewarding selection of bonus features.

Robinson Crusoe On Mars is a marvellously colourful and atmospheric slice of the purest science fiction. Haskin's intergalactic treatment of Dafoe's immortal tale is as serious and as realistic as a flamboyant Martian opus from the sixties could be. Lundin can be vaguely wooden in his role of the cosmic Man-Friday, but Mantee is very good with a part that demands he act off of nobody but a monkey for the majority of the film's running time. Without a doubt, this is one of the great unsung heroes of the genre and richly deserves to be reappraised by fans who may not have had the opportunity to see the film in such a glorious condition as this.

The presentation of the movie is absolutely tip-top. This SD transfer from Criterion is simply stunning for a Techniscope film from 1964. The colours are bold and the image full of detail. The mono track is also excellently produced and alive with detail. Extras are good, too. The commentary may a trifle stuttery but it is still much more than we might have expected and the documentary is off-beat and engaging. Still love that song from Lundin, though - it shouldn't work, but, like the film it is based upon, it is unique and mesmerising.

The classic tale gets an interplanetary boost from Haskin whose inimitable style and visual dexterity create a rare sci-fi gem.