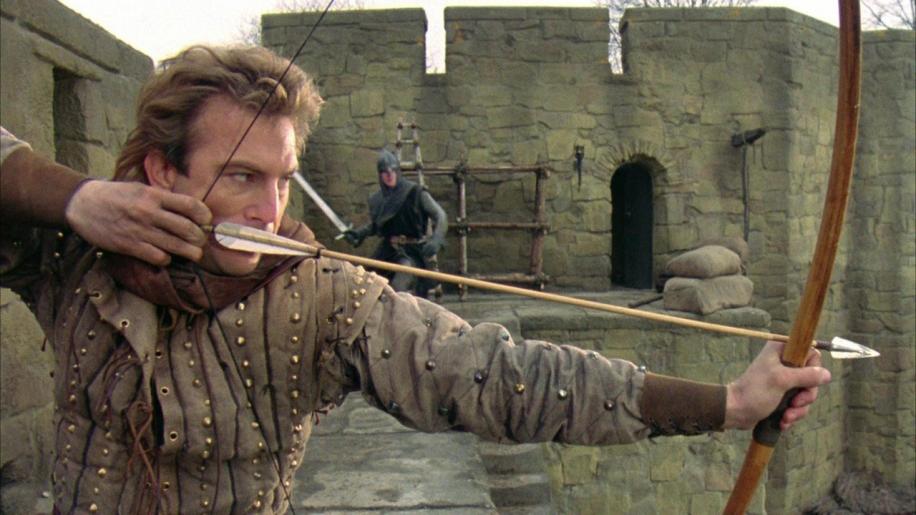 Presented in its original 1.85:1 ratio and anamorphically enhanced the image is rather disappointing. There seems to be a lack of fine detail present with only close up shots looking acceptable in terms of detail. Colours in most scenes whilst acceptable do tend to look rather washed out with flesh tones looking pale. I have seen many older aged movies looking far better than the print we have here.

During many of the dark scenes in the castle of Nottingham the image again suffers from a lack of detail with blacks appearing grey and losing what little shadow detail there is. There are also problems from poor encoding during these scenes with signs of pixilation and dot crawl. During the lighter moments such as those filmed on Hadrian's Wall the print suffers quite noticeable edge enhancement which looks awful. Originally released as a Dolby SR track theatrically, we are treated to both Dolby Digital (448kbps) and DTS (768kbps) 5.1 remixes. Both sound rather dynamic with the films score by Michael Kamen sounding very prominent and forceful with good controlled bass response. The track does appear to feature most of the audio through the front three channels, with only the occasional surround effect and the score using the rear surround channels.

During some of the more intense battle scenes there is plenty going on with some excellent panning effects and good use of the surrounds and LFE to add to the action, however as soon as things calm down on screen, the audio mix folds back again towards the screen. Dialogue is well produced with those American (er sorry English) accents easy to follow and understand.

Whilst the DTS track appears to have a richer clarity and tighter bass than the Dolby version, the old problem of lip sync reared its ugly head with the DTS track losing sync quite badly, and had me reverting to the Dolby track. I find this quite unacceptable these days with some excellent DTS tracks suffering from this irritating problem, in fact I can't watch the R1 version of Moulin Rouge because of the same issues, yet the R2 is fine. Let's hope they get this sorted. Being a two disc special edition we are treated to what looks like a host of extra features. Starting with disc 1 we are treated to a commentary track from from Kevin Costner and Kevin Reynolds and one from Morgan Freeman, Christian Slater and the Producers. Both tracks are full of facts about the filming and production problems. Morgan Freeman is very entertaining at times with his anecdotes from the set. On to disc 2 and we have a live performance of Bryan Adams “Everything I do” from Slane castle, a Behind the scenes Featurette which focuses on the real Robin Hood and this new adaptation of the legend. Another very nice feature is the entire score from Michael Kamen presented in Dolby Digital 5.1 sound. Finally there are Trailers, photo galleries, production notes, cast bios, a feature on weapons of the time and Interviews with Costner. A welcome special edition which is nicely presented, but picture and sound suffers somewhat, with the extras looking better than they are, disappointing overall.