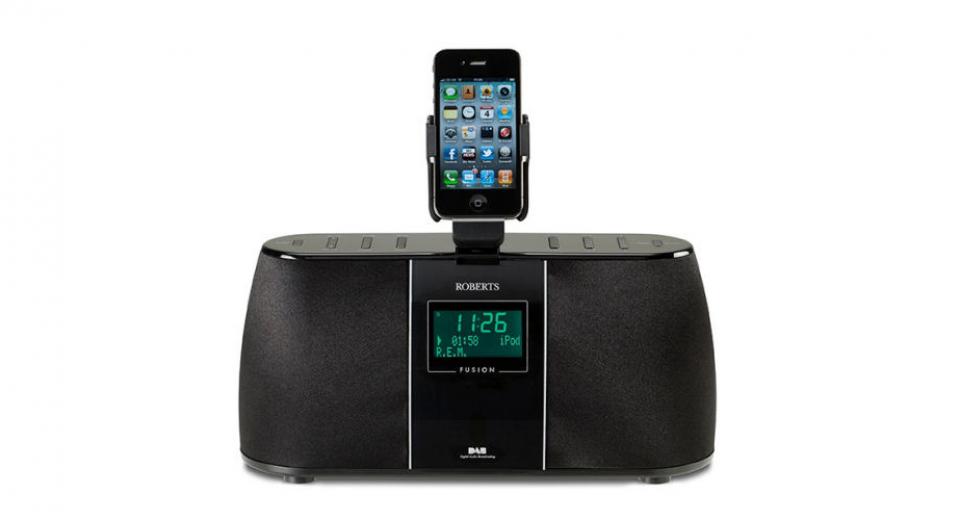 Roberts has been synonymous with radios for decades and their website still proudly displays the two Royal warrants that the company has earned. DAB and FM radio remains the primary focus of the company but they have been fitting iPod docks for some time now and the brand new Fusion seen here is a neat combination of the two.

More than any of the other models in the test, the Fusion is a DAB/FM radio with iPod functionality. This is neatly pressed home when you extract the unit from its packaging and note that it doesn’t appear to have a dock at all! This is because the dock is on a hinged mounting and is folded down behind the main body of the unit. Viewed from the front with it retracted, there is no clue at all that the Fusion can do anything with an iPod. Press the button on the top panel and the dock rotates into position on top of the unit with enough of a Thunderbirds style flourish to please me immensely.

There are advantages to this method of fitting the dock. The first is that the Fusion is comfortably the most compact unit here when the dock is folded away so it can be placed in spaces that the others can’t - an ability helped further by the power supply being a wall wart type with no block half way up the chord. The second is that the dock doesn’t sit exposed when not in use. This not only reduces the danger of damage by knocking it, it also means that the dock connector itself is stored in such a way it is less likely to suffer from dust and debris buildup.

On account of the presence of the DAB/FM radio, the Fusion carries a full set of controls on the top panel for tuning, adjusting presets and bands and for using the sleep and alarm functions included. It also has controls for the iPod which is a bit odd given the iPod is about an inch from them but certainly thorough. This means that the Roberts is by far the easiest of the docks to operate without the remote. This isn’t to say the remote isn’t useful - it has all the functions you might expect and some bright spark at Roberts has fitted a small “bump” on the front underside of the remote which means without glancing at it, you know which way around it is.

The Roberts is also fitted with a display. This shows the time, the source selected and it has two data lines underneath. These show radio station information but also give time elapsed and information on songs playing from your iDevice. Most interestingly, this song and artist information is also available on Spotify and TuneIn Radio, which is a nice touch. The green on black is a little retro but easy on the eye and readable at a distance.

The Fusion makes use of a pair of “full range” drivers (in this case 57mm units) like the PURE but augments them with a single passive radiator that runs almost the full width of the unit. This is not the same as a conventional powered driver but gives the Fusion a little bit more low end weight than would otherwise be the case with only the powered drivers working. The listed output of 2.5 watts per side is (by some margin) the lowest in the test but in practice, the Roberts doesn’t seem in any way underpowered.

The fit and finish is very good too. There is enough detailing on the unit to prevent it from coming across as unduly black and the buttons and controls (to say nothing of the hinged dock arrangement) all feel substantial and robust. The result isn’t the most visually dramatic design going but it is handsome enough and feels like it will last.

Roberts has a great deal of experience with radios of this size and this shows through in several areas. The first is that despite the lowest power output and relatively small drivers, it manages to sound competitive in a field of larger devices. The second is that this is a truly excellent device with the spoken word. If you were looking for a device that is going to handle speech radio and audiobooks as well as music, the Fusion is something of a champ in this respect.

This is once again largely down to using a single pair of drivers so there is the same fine coherence across the midrange that the PURE has but the smaller size of the units in the Fusion give it slightly more life and brightness to the top end. The bass radiator is surprisingly effective as well. The low end response of the Fusion is not as detailed as some of other models here and it doesn’t have the drive of some of the bigger docks but it never feels bass light. I can only assume that the two 57mm units are extremely sensitive as the Fusion certainly goes a long way on a power output of 2.5 watts. Pushed to the upper ends of the volume scale, it will harden up a bit but it is perfectly capable of filling the sort of room I’d expect it to be used in.

The Fusion isn’t quite as deft with music as it is with speech. It doesn’t offer quite the same insight into recordings that some of the other models do and it doesn’t have the same impressive tonality of some of the other designs here but generally it is enjoyable enough to listen to. The small size does mean that it doesn’t have much of a stereo effect but there is a pleasing amount of left to right movement with the upper registers which is a nice touch.

The built in DAB and FM tuners are very good performers as well. The sonic balance is similar to the dock and the same excellent performance with speech was present. I received every DAB and FM station I was expecting to receive and had little noise or interference on any station. Together with the well thought out interface, it shows that these are absolutely integral features to the Fusion and by no means an afterthought.

The Roberts is a very impressive piece of equipment for the asking price. Despite being comfortably the least expensive unit here, the range of features make for a useful unit and one with some very clever design touches. There are some limits to the absolute sonic ability compared to some of the larger and more expensive docks here but if you are looking for a talented radio that doubles as an iPod dock, the Fusion does an admirable job.