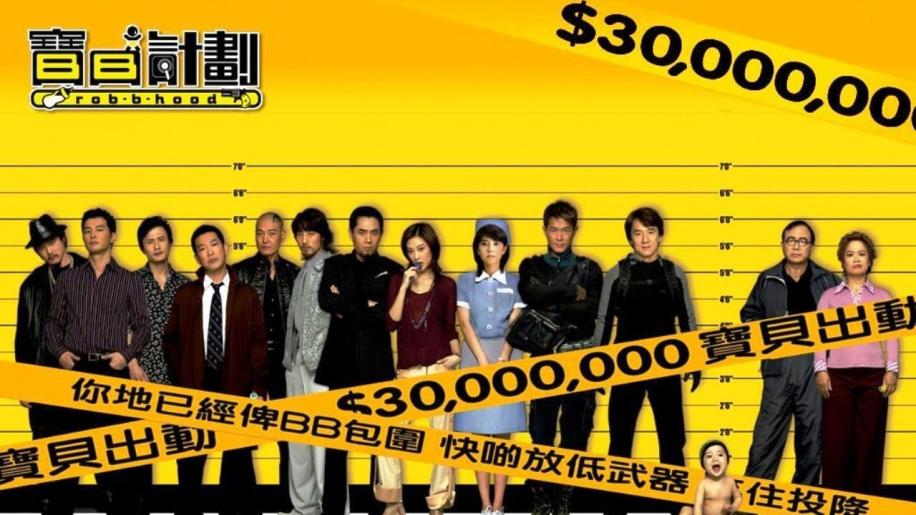 There really is little need for a vast introduction to a Jackie Chan film, as the man is virtually an industry by himself. Idolised by more than one and a quarter billion Chinese and with hoards of loyal followers in the West, he has managed the kind of superstardom that few actors could even dream of. With his talent for acrobatic death defying stunt work and penchant for playing the fool, his mix of action and comedy has won hearts the world over. Robin-B-Hood marks the third of his collaborations with Benny Chan after 1998's Who Am I? and their fresh take on the Police Story franchise in 2004, the imaginatively titled New Police Story. Where many of these modern Hong Kong films differ from the traditional mould, of how many in the West view Jackie Chan's output, is the tone which they take, being partly inspired by Jackie's desire to stretch his acting muscles. Robin-B-Hood marked the third of a similar triumvirate of movies by Jackie which started directly after completing Around the World in 80 Days whereby he challenged himself to take on three consecutive roles that are vastly different and would help establish himself as a genuine actor rather than simply a performer. The question is, does this transition prove successful?

The premise is extremely simple, but both Chans are clearly hoping that the character interplay will wring enough emotive value out of proceedings for this to be seen as a film with bona fide acting in it rather than what many regard as comedic performing. Jackie Chan plays a thief named Thongs who along with his two accomplices, Octopus and Landlord, live a fairly care free existence robbing from the rich to line their own pockets and continue their lifestyles. Thongs is an inveterate gambler who fritters all his money away whilst avoiding the loan sharks he is in hock to. Octopus is the youngest of the trio and he chooses to use his cash to live the high life, wining and dining upper class socialites, driving a Ferrari he knows he'll never be able to keep up the payments on and just generally living well beyond his means. The final partner, Landlord, is the eldest and he eschews the high life to instead save all his stolen loot for his imminent retirement. When one day he is burgled, and his life savings taken, he agrees to take on a far more risky, and morally dubious (even for these thieves), job. With both his partners in crime having recently taken a hit in their wallets and now seeking fresh funds they jump at the chance to make some easy money, without letting Landlord explain exactly what the mission entails.

This is where for some the film may start to stretch their incredulity and also their patience. The task at hand for the hapless threesome is to steal a baby and return it to its grandfather. The younger pair, eager to get the job done as soon as possible, forego Landlord's explanations of what they are to do at their destination and therefore it comes as a complete surprise to them when they find themselves snatching a child rather than jewellery and bank notes. If the plan was to make Thongs and Octopus more sympathetic characters then this to a certain extent works, even if it does make proceedings seem less credible, but Chan has stated his intention to play different roles and his original idea in this case was to play a bad guy. By putting in this handy get out, it removes the idea that he is a mercenary man with low morals, blinded by his gambling addiction and mounting debts, willing to do anything for money, which is quite clearly the premise. Cue some protestations and Landlord's plea for the money he needs post burglary and the set-up to the film is complete, as Thongs and Octopus find themselves, quite literally, holding the baby.

What follows is basically an Eastern Three Men and a Baby minus one male figure and with the added bonus of some high kicking action. A huge amount of the middle portion of an already overlong film is spent exploring the supposed hilarity this situation might bring. The usual fodder of two grown men not being able to make powdered milk, as well as the standard revulsion at having to change a nappy is trotted out, only in truly horrifying fashion. Faeces is clearly something that was deemed funny, but there are so many instances of it used that it no longer contains any punch when a dirty nappy is utilised as a weapon. Seeing a child's excrement smeared over someone's face I'm afraid led me less to laughing and more to feeling revulsion, as frankly I'm not sure I could look at a chicken Korma the same way again. This conveyor belt of old ideas concerning inept men having to look after an infant is tiring to say the least and contains little of the joie de vivre one associates with a Jackie Chan film. What little originality there is wrung from this theme is also generally wide of the mark with regards comedic success.

So if the comedy is fairly weak, what of Chan's move towards more meaty acting roles and his ability to depict raw emotion. Well there are some scenes in which he acquits himself quite well, and within another film this may have worked nicely. The problem lies less in Chan's acting prowess, but more in the direction and pacing of the piece, as what could have been a tight comic romp or a thoughtful drama instead falls completely between the two, missing both targets in the process. There is too much light hearted japery to keep any weight to the darker, more complex scenes that investigate the trio's motivations behind their crimes and what has brought them to this point. By the same token, this push towards hard hitting emotive performances drags the levity of the jumping high jinks to a level that makes it hard for mirth to be found as easily. Ultimately, although Chan may decry his status (certainly in the West) as the king of colourful, fun, stunt filled and well choreographed, physical action comedy, this is where his true talents lie. I'm sure he can act, but to shoehorn in what he excels at, namely incredulous set-pieces and hilarity, into a piece that aims for more, does neither any favours. There are glimpses of Chan's ability in both fields, but I'm sorry to say tired ideas, a lack of stunts in comparison to the excessively long running time and an uneven pacing that is born of this strange mixture, results in a film that waits too long to make its point and even then does so in an incredulous and poorly executed manner.