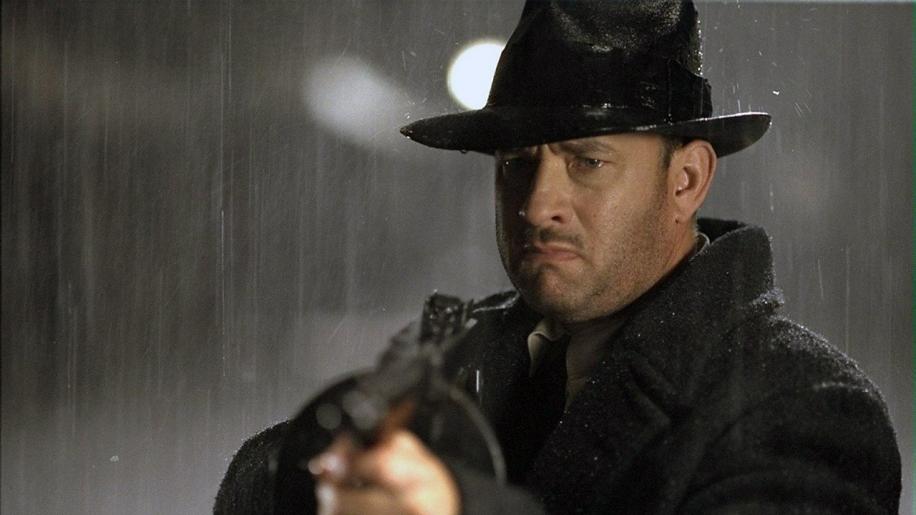 I’ve always had my reservations about Tom Hanks, and his movies have often suffered by association in my regard. I remember loving Big, and some of his other early stuff, but, unlike the Academy Awards – who seem more than happy to repeatedly honour him for performances which, whilst good, are seldom outstanding – I’ve never really rated him as a great actor. In his film history – which has had its share of ups and downs – he has never really strayed from good guy territory; never really stretched himself to the extent that defines the acting legends over the generations – from De Niro to Day-Lewis. Back in 2003, then hotshot Director Sam Mendes, fresh from his lauded debut, American Beauty, picked Hanks to play the lead character in an adaptation of the rather bleak depression-era revenge graphic novel, Road to Perdition. The book itself was a loose homage to the Lone Wolf and Cub manga (and, later, film series), a tale of a Samurai warrior whose family is murdered, and who goes on the run with his son to seek retribution on the lords who plotted against him, thus choosing to take the path of revenge: often regarded as ‘the road to hell’. The moody project offered Hanks a decent opportunity to play, if not a through-and-through bad guy, then certainly a brutal anti-hero. And in the hands of Sam Mendes, himself no stranger to exposing the dark underbelly beneath the surface, there was great potential for a gritty crime thriller.

It’s the 1930s and Capone has much of the country under mob-rule. In Illinois, John Rooney (Paul Newman) is an ageing Irish organised crime boss, and Michael Sullivan (Tom Hanks) is his most trusted enforcer, an orphan who Rooney has also brought up practically like a second son. However, when Sullivan’s young son witnesses a mob execution, Rooney’s own son, Connor (Daniel Craig), decides that it is necessary to guarantee his silence. When the assassination goes horribly wrong, Michael Sullivan flees the State with his son. He seeks permission from Frank Nitti, and Capone’s Chicago-based mob, to seek retribution against those who wronged him, but when this is rejected he takes on both the Italian and Irish mafia in an attempt to get his revenge. But with a mob-hired psychotic assassin on their tale, will Sullivan be able to complete his last mission?

Honestly, the first time I saw it, I was not particularly enamoured by Road to Perdition. It felt long and drawn-out, at times pretentious in its style, and centred on a performance from Hollywood Mr Clean, Tom Hanks, as a supposedly feared Tommy-gun-toting mob enforcer, and almost irredeemable anti-hero. Hanks just did not work in the role, and the film did not sit right with me. Eight years down the line and revisiting it was actually something of an unexpected pleasure. Not everything had changed – the film had not suddenly evolved into a masterpiece – but it was still, surprisingly, pretty rewarding.

Mendes really is to thank for all of this. He’s quite a subtle director at times, his flair and style not always as easily noted as that of auteurs like Scorsese and DePalma, but he always comes up with the goods. And Road to Perdition is a painted picture come to life. Taking inspiration from artist Edward Hopper’s realist reflections on then-modern American life, and working with a minimalist script, Mendes sought to eschew the traditional trappings of the gangster genre and evoke the style and sentiment of classics like Once Upon a Time in America. He succeeded for the most part, with fantastic contributions from both his Cinematographer, the late Conrad Hall (who shot Butch Cassidy and the Sundance Kid, The Professionals and Marathon Man – as well as American Beauty) and the composer Thomas Newman, who was Oscar-nominated (appropriately) for his outstanding work on this piece. Between the strikingly-framed shots – like the blackened-out deep shadow from which fire sprays out of the mouth of the Tommy Gun; the torrential downpour, with the streets riddled by a seemingly interminable succession of rain drops; and the moving-focus sequence where the psychotic assassin is first introduced walking towards the camera – and the cleverly varied score, which totally absorbs the proceedings at key points, often muffling the effects and engulfing the viewer in a sea of perfect images and thematic, overwhelming scoring.

Still, despite the obvious art in this high quality product, there still remains an air of pretentiousness about it, the movie teetering dangerously on the fine line between suitable style, and style over substance. The script’s minimalistic approach is well-suited to the material, but it does rely on the actors to convey a great deal through their actions and gestures alone, and this is not a resounding success.

Tom Hanks? He still does not quite cut it for me as an anti-hero. However, I don’t blame the man – personally – quite as much as I did on first viewing. He brings to Road to Perdition a similarly stoic, world-weary demeanour to that he provided in Saving Private Ryan. The trouble is, he is not playing a good guy here, in any way, shape or form. The intention behind the character is a man who is clearly set on his irredeemable path to hell, but who wants a different life for his surviving son, and yet – probably because it’s Hanks in the part – the filmmakers clearly went out of their way to mitigate the horror behind Hanks’s character’s day-job. Rather than painting him as a force to be reckoned with, a notorious mob enforcer whose very name strikes fear into the core of those he visits, and a man who clearly kills without question – at the behest of his boss; they reduce the overt violence of the man, and nurture the nicer side to him, even throwing in a cheery montage of more humorous moments when the Sullivans are robbing banks and the young boy is perpetually having problems driving around to pick up his dad after the robberies. What, has this suddenly turned into Robin Hood?

The original material was darker – the lead character, himself, a more clearly painted assassin. Because that’s what he is. And, frankly, I’m not even sure Hanks could pull off cold-blooded killer, but they didn’t even give him the chance. I think the fact that they attempt to soften the impact of seeing Hanks in this kind of role, subsequently affects the whole movie, leaving you wondering whether this is indeed a trip down ‘the road to hell’ or just another patronising attempt by Hollywood to paint doomed characters in a more cheery and audience-friendly light. It’s like Julia Roberts in Pretty Woman. She is a prostitute, but they go out of their way to paint her in an extremely likeable, and thus more palatable, fashion. I wonder whether she would have been as easy for female moviegoers to relate to had her introduction offered us a montage of her ‘work’, performing her services down back-alleys with slimy clientele groping her, and using her. But because we don’t see it, we can pretend she’s a good, clean, prostitute. In this alternate Hollywood Universe her girl-next-door, sweet-and-innocent kind of prostitute would end up married to Hanks’s loving father/cold-blooded killer, a man who, himself, is never actually seen executing anybody unprovoked. At one point, Newman’s mafia boss yells: “There are only murderers in this room! Michael! Open your eyes! This is the life we chose, the life we lead. And there is only one guarantee: none of us will see heaven.” It’s powerful stuff, and it gets to the core of what the movie is about, cutting to the heart of the lead character. And yet they’re just hollow words, when surrounded by the images we see – which are clearly not that of a man on the way to hell, but more of a man who is having an exciting road-trip with his son – Bonnie and Clyde style – and who the viewer is often rooting for to get away scot-free.

The rest of the cast are more perfectly suited to their characters. The late Legend Paul Newman puts in a decent final performance as the mob boss, John Rooney, even pulling off a decent Irish lilt, and providing us with the most dramatic, engaging dialogue in the whole movie. Rooney is much more clearly torn up inside than Sullivan, despite the tragedy in both their lives, and it is because of Newman’s capabilities as an actor that we get this kind of depth to the character. Daniel Craig, looking shockingly weasely and, frankly, nothing like Bond, is pretty good as the untrustworthy Rooney son, volatile, violent and generally not very likeable at all. It’s a great little role for Craig – and I do love that early scene where he watches, with forced grin, his own father playing a duet with Sullivan. You can see that there is something not quite right about his smile – reading the inner, hidden jealousy in his very eyes – and having it all confirmed through Sullivan’s son, who picks up on the facade.

Jude Law is always better when he is playing against type, and thus he makes for quite a good psychotic hitman here. Perhaps the odd balding head-piece is unconvincing, but otherwise it’s a quirky, massively disturbed character, who works as a supreme nemesis for Tom Hanks’s lead. Unfortunately his character was never in the original graphic novel, and whilst he makes the proceedings infinitely more exciting, he also more clearly defines the previously blurred line between good and bad, placing himself on one side, and pitching Hanks’s hitman on the other. Rounding off the cast we have a bunch of familiar faces, from Ciaran Hinds to Jennifer Jason Leigh, with Stanley Tucci – ever the consummate professional – providing a nice cameo role as real-life mob associate of Capone’s Frank Nitti.

I have to say that I was pleasantly surprised revisiting Road to Perdition – it was better than I remembered it, even if it still left me with a slightly unpleasant, bitter taste in my mouth. I don’t think that it is the underrated masterpiece that many critics class it as, there are many flaws to this adaptation – most notably the changes made to accommodate audience reactions to a ‘bad guy’ Tom Hanks. Had they played this darker, and more unreservedly followed the titular path to hell, this may have indeed become the modern classic than many regard it as. Unfortunately instead it remains a decent noir, an unusual gangster flick and a slightly different vehicle for Tom Hanks, artistically directed by Sam Mendes, with just enough substance to ground the stylish proceedings. Certainly worth revisiting, particularly if you haven’t seen it for a while.