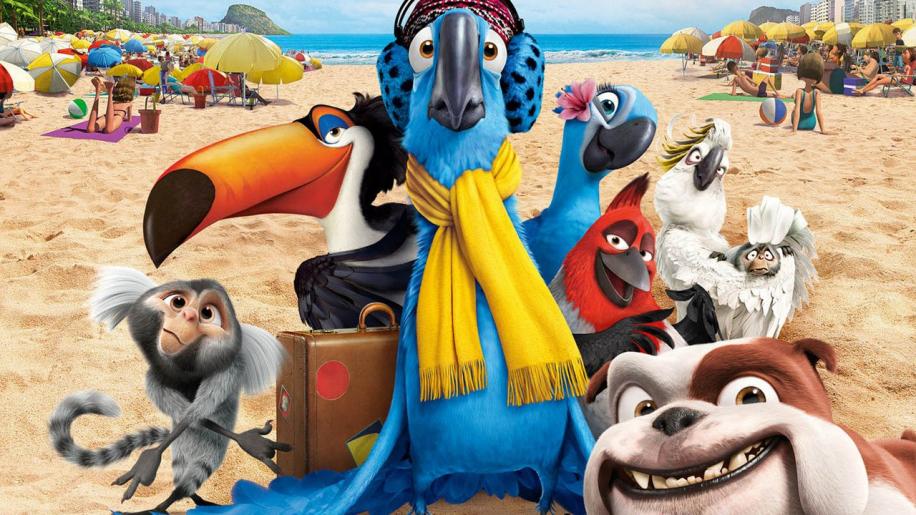 The theatrical poster and trailer for Rio included the tag line “From the creators of Ice Age” and that should at least give you an inkling of what to expect. The Ice Age films themselves are fun, harmless, well made but ultimately forgettable entertainment and so, in the end, is Rio. That’s not to say Rio is a bad film because it isn’t and it’s a damn sight better than Cars 2, which must rank as Pixar’s first genuine failure. It’s just that Rio doesn’t stay with you in the way that really great animated movies do; in that sense it is more like a Happy Meal, enjoyable at the time but two hours later and you’re hungry again.

The plot of Rio centres around a male blue macaw called, imaginatively enough, Blu (voiced by Jesse Eisenberg) who is taken from his home in the jungles outside of Rio de Janeiro as a chick and ends up being raised in Moose Lake, Minnesota. His owner Linda (Leslie Mann) runs a bookstore and shares her life with Blu, who thanks to his enclosed but comfy and safe existence has never learned to fly. One day a Brazilian ornithologist called Tulio (the Brazilian actor Rodrigo Santoro) arrives at the bookstore with a proposition for Linda and Blu; he offers them a holiday in Rio de Janeiro if Blu will mate with a female macaw, because Blu is the last male of his species.

Once in Rio Blu is introduced to Jewel (Anne Hathaway) a fiercely independent female blue macaw who is determined to escape from Tulio’s aviary. Blu immediately falls for Jewel but the path to true love is never smooth and after being stolen by thieves who deal in exotic birds, the pair set off on various avian adventures. Along the way they meet up with a cardinal called Pedro (will.i.am from the Black Eyed Peas) and his canary friend Nico (Jamie Foxx), as well as a toucan named Rafael (George Lopez) and his bulldog friend Luiz (Tracy Morgan). The main villain of the piece is a cockatoo named Nigel who is voiced by The Flight of the Conchord’s Jemaine Clement.

The idea for Rio was first developed by director Carlos Saldanha in 1995 and back then the plot centred around a penguin being washed up on the shores of Ipanema. However he changed the plot to that of a flightless blue macaw after the release of Happy Feet and Surf’s Up, both of which had stories that revolved around penguins. Ironically, Pixar cancelled their film Newt because of the similarities in its story to the final plot of Rio. Saldanha, who directed Ice Age, Robots, Ice Age: The Meltdown and Ice Age: Dawn of the Dinosaurs, is a native of Rio de Janeiro and decided that the city would make a suitably cinematic backdrop for his animated tale. He pitched his idea to Chis Wedge at Blue Sky studios and after finishing the third Ice Age movie, Wedge gave Saldanha the green light and Rio took flight.

From the outset the film was designed as a love letter to Saldanha’s home town and the director intended to use the spectacular geography of the city to its full advantage. To achieve this some of the animators were sent to Rio de Janeiro in order to experience the city first hand and to see the various locations that Saldanha intended to use. This helped the animators to create a complete replica of the city and it’s surrounding mountains in the computer, thus generating some spectacular backdrops for Blu’s adventures. He also wanted to infuse the soundtrack with the beat of Brazilian music and so enlisted the help of Brazilian musical legend Sergio Mendes, who in turn was able to attract other musicians such as Carlinhos Brown and the aforementioned will.i.am. Rio’s orchestral score is by John Powell and he does an excellent job of writing around the film’s musical set pieces and creating a cohesive soundtrack.

Saldanha chose an excellent voice cast, with many of them bringing their own particular strengths to their specific roles. Jessie Eisenberg’s neurotic Blu comes across as a feathered Woody Allen and frankly Eisenberg can pull off this kind of schtick in his sleep these days. Eisenberg actually recorded his lines at the weekends whilst he was shooting The Social Network and he found it a relief from the joyless character he plays in that film. Anne Hathaway has done some voice work before, playing Red Riding Hood in Hoodwinked, and she infuses Jewel with plenty of sass and vitality. She also gets a chance to show off her singing voice and to be honest the girl has a fair set of pipes on her. Speaking of singing, the music and songs are well orchestrated, with both Jamie Foxx and will.i.am giving their vocal chords a good work out. If you’re a fan of The Flight of the Conchords then you’ll love Nigel’s song - Pretty Bird - which was written and sung by Jermaine Clement and is one of the film’s highlights. In fact Clement’s villainous cockatoo nearly steals the show.

The other main animal characters are George Lopez’s friendly toucan Rafael and Tracy Morgan’s bulldog Luiz. It is this latter character that feels somewhat out of place because he isn’t a bird and frankly his entire sub-plot could be dropped and the film would essentially be the same. In addition Tracy Morgan is as annoying in this as he is in everything else he's been in - how does this goon keep getting work? The human characters are largely dominated by Linda and Tulio and watching these two rather shy and clumsy people fall for each other is actually quite sweet. The rest of the human characters revolve around the trio of bird-knappers - Marcel, Tipa and Armando - and a young orphaned boy called Fernando.

The film’s story is hardly original and some of the plot points don’t make a lot of sense, for example it is never really explained why the villains need to build a float and go through the carnival in order to get out of the city with the stolen birds - aside of course from giving the filmmakers a set piece in the carnival. Also at one point, when Blu and Jewel find themselves chained together and on the run, you are immediately reminded of the bickering couple in Stardust and before that in Midnight Run. With the exception of the orphaned Fernando, the film also glosses over the harsh reality of life in the favellas and at times you would think that the film was made by the Rio de Janeiro tourist board. Obviously this is a kid’s film so no one is expecting City of God but as Pixar’s Up showed, just because a film is aimed at kids it doesn’t mean it has to shy away from real life.

Whatever the limitations of the story, there are no such doubts about the animation, which is just spectacular. Aside from the recreation of Rio de janeiro itself, with its skyscrapers, favellas, mountains and jungles, the animation of the birds is equally as impressive. The look of the avian characters might not be as photo-realistic as in Legend of the Guardians but the amount of detail that has gone into Blu and his friend’s feathers is incredible. Much like the Ice Age films there is a certain cartoon-like quality to the animation but the use of primary colours is perfect for both the colourful inhabitants of the jungle and the equally colourful inhabitants of the city itself.

Blue Sky Studios previous film, Ice Age: Dawn of the Dinosaurs had utilised 3D and Rio clearly benefited from the experience gained on the earlier feature. As is increasingly common these days the film’s 3D stays within a fairly conservative depth budget which avoids both eye strain for the viewer and too many gimmicky negative parallax (in-your-face) shots. In fact the majority of the film stays within positive parallax which creates the impression you are looking through a window. There is the occasional negative parallax shot but the majority of the film uses the dramatic geography of Rio de Janeiro to create spectacular 3D vistas. Unlike the Ice Age films, which were 1.85:1, Rio uses a 2.35:1 ratio that really gives the film an epic and panoramic scope. The film’s flying sequences in particular benefit from both the wider screen and the added dimension, creating an incredibly immersive experience. James Cameron certainly realised how effective flying sequences are in 3D which is why he put so many in Avatar and Rio also benefits from its own aerobatic antics.

Ultimately, Rio is a light concoction that comprises an explosion of colour, sound and samba influenced music, much like the city itself and in that sense the film reminds one of going on holiday to Rio de Janeiro - great fun whilst you’re there but by the end, you’re glad to get home.