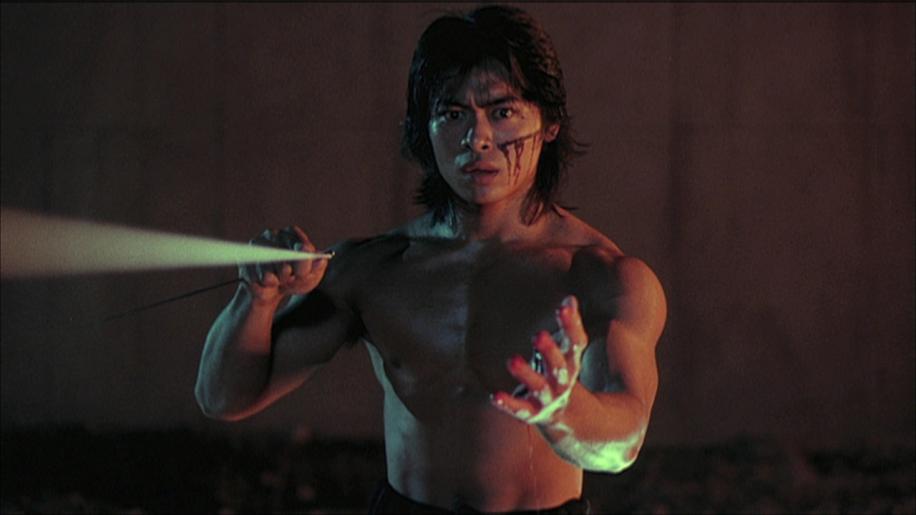 Asian “extreme” cinema may seem a relatively new genre, identified mainly by lo-fi Japanese splatter titles like The Machine Girl or Tokyo Gore Police, but for some time there was a film that embodied many of the ideals that we've come to identify with the present day sub-genre. Long before anybody had heard of Noboru Iguchi or Yoshihiro Nishimura, with their twisted vision of inventive gore and hyper-violence, there was Riki-Oh: The Story of Ricky. Banned in several countries, it still looks every inch the video nasty, its revelling in simplistic narrative set-ups and all manner of twisted gut punching and head smashings unsurprisingly show the roots of the material. Based on a manga by Masahiko Takajo and Tetsuya Saruwatari, the story was first adapted into a pair of feature length animes and then, a year after the second, this live-action version was let loose upon the world.

Written and directed by Lam Nai-choi, a name that screams B-movie at best, it has gained cult status, flagrantly bypassing any attempt to rein in the more outlandish horrific comic book moments from Takajo's writing (or Saruwatari's illustrations) and aiming squarely at shock tactics. Some films have a couple of jaw-dropping moments, Riki-Oh will give your chin carpet burns.

It's set in the future, well 2001 to be exact, but bear in mind when this was written, the alternative future/now isn't one of a writer swallowing the lies of Tomorrow's World hook line and sinker (indestructible CDs and robot butlers anyone?) but instead a slightly different, infinitely believable premise underpins the story, namely that all government organisations and facilities have been privatised. Our titular protagonist, Ricky (played by a then 18 yr old Fan Siu-wong, best known for his roles in Ip Man and its sequel), is a young lad, ex music student, and an all round nice guy who wouldn't look out of place in the Chinese version of Happy Days. His blissful existence, as told through flashbacks, is shattered when his girlfriend Anne is killed (well sort of, it's the kind of movie death that'll have most viewer's internal monologues thinking she was a bit dappy) by a gang of drugs pushers.

Ricky, being more than a bit miffed at this turn of events, and a damn good martial artist to boot, proceeds to kick seven shades of the proverbial out of all and sundry until he's left with blood on his hands, I dare say a bit of brain matter in his hair and a ten year prison sentence. Unfortunately Ricky doesn't end up in Ford Open for his act of street justice but instead a snakepit of sadists languishing in violence and despair, run by unscrupulous officials and populated by a host of characters who'd make Mike Tyson look like Floella Benjamin.

Now obviously Ricky can't keep his head down, so the film unfolds as a series of increasingly absurd fights where he'll reduce his opponents to a heap of giblets. He enters the prison, and from day one he is marked out as a bit of a tough guy, flashing his abs like a narcissistic boyband member as he's taken to the X-ray machine to prove he isn't carrying a weapon, only for the flustered guards to see the image of a man's chest with half a dozen bullets still lodged internally. Surgery is for wusses, Ricky could probably sweat those lumps of lead out.

The prison is divided into four wings, North, South, East and West, with each being ruled by one of the heads of the “Gang of Four”, an odd mix of baddies all having their own easily identifiable look: one's a tattooed tough guy, the other a looming Neanderthal, the third a wee man with bleached hair and carrying projectiles and the fourth just being weirdly androgynous for an all male prison. They report to the deputy warden (played by Fan Siu-wong's real father), every inch the comic book baddie with his hook hand and one eye. Our first glimpse of one of the cell block Captains, an underling to this all powerful quartet, is pure comic book bad guy, pushing another inmate around in a fashion that's less genuinely scary and more funny. When a man with glasses get thrown against a wall, the English dub cry is that of a farcical whimper. The bespectacled wimp sees the thug pick up a wooden train he's been crafting for his child, whom he hopes to see soon as he's up for parole, and you know there is only going to be one outcome; head meets toy and both are smashed. It's not highly imaginative stuff, but the artistic flourishes will be displayed soon enough.

The scene unfolds further, the old man produces a wood plane from somewhere (it's three times the size of his pocket and he's in the washroom but let's not get logical here) and tries to attack the goons, only to be dispossessed of his makeshift weapon and receive a prison facial peel of sorts. The effects are obvious, to the point that you don't wince, you don't get an overwhelming tide of revulsion sweep over you, you just gawp in amazement at the shoddy horror of it all. Ricky marks his entrance by tripping the head thug, sending him face first onto a piece of wood with nails in (again, don't question it) it's a shot that has as much humour in it as anything, the weird lifeless mannequin looking like the world's worst Guy, spurting blood, the camera resting on the shot for a split second too long for the moment to be anything other than gruesomely funny.

This scene sums up the film in a nutshell – hammy, inventive violence, absurdity and unintentionally humorous horror. If you're thinking I’ve perhaps spoiled one of the best moments for you, fret not, Riki-Oh is littered with similar occurrences, though I’d suggest if you are viewing this for the first time you might want to hit play quickly, the Blu has one of those menus that recycles many of the best bits. Not that they could cram them all into the continuous minute loop, such is the profligacy of those “I can't believe someone filmed this” instances; it has encounters that still put present day Japanese splatter flicks into the shade.

When a spot of claret isn't redecorating the walls things could drag, but at 90 minutes it keeps a brisk pace, filling in the carnage with some comic-book characterisation and easy to digest clichés. Ricky learns the secrets of his fighting technique in a misty graveyard, he'll pull off lots of pained looks as he contemplates the unfairness of the world, he'll continue to kill evil-doers and then try to save them (perhaps it'd be an idea not to shatter their brains first), bad guys will cackle maniacally, thunder will clap and ultimately fists will fly. It isn't rocket science, but it is a slice of devilishly enjoyable schlock martial arts horror. It has that “I mustn't look away” appeal that only proper B-movies ever attain, the worse it gets - such as Ricky's scenes with his girlfriend, which are so saccharine they may give you diabetes - the more you're entranced.