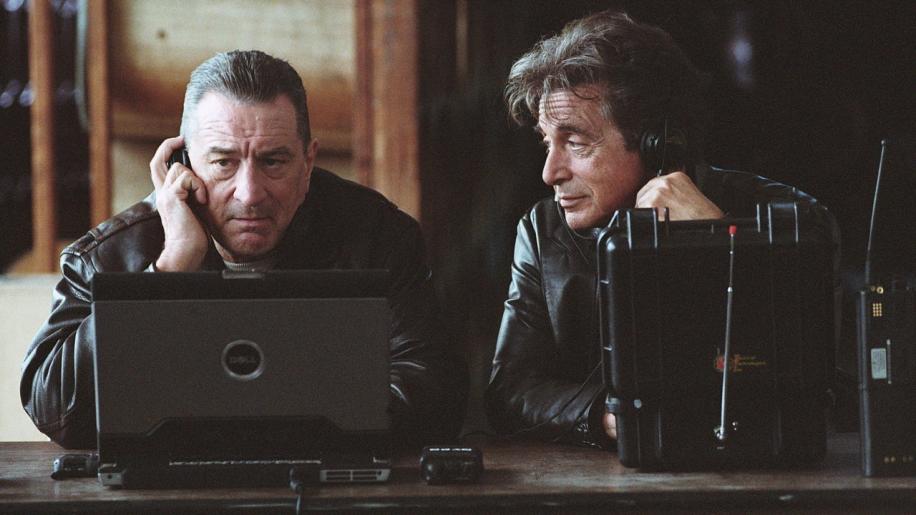 Robert DeNiro an Al Pacino, two of the greatest actors of all time, arguably by any standards. But, despite having both been in the industry for several decades, it wasn't until Michael Mann's 1995 crime epic Heat that they finally got to work together. Sure, they had both been in the second (and best) Godfather movie, but they had never shared a scene until Heat. The momentous coffee-shop chat was everything fans of both actors had been waiting for, although we clearly wanted more from these two. Now, thirteen years later, we finally get it. De Niro and Pacino teaming up this time, both cops - partners no less - for the crime drama Righteous Kill. We waited so long, bated breath - it could have been so great. It should have been so great.

Veteran detectives Turk and Rooster are bitter and beleaguered by their work, seeing the bodies pile up every day, the innocent victims who suffered, their attackers who get off on technicalities. When it gets too much, the rules start to get broken - evidence planted on child murderers who escaped conviction and cuffed suspects beaten - and so when these dealers, pimps and murderers start turning up dead it's not long before these two go from being the investigating officers to suspects themselves.

Righteous Kill is one of the most tawdry, by-the-numbers, vapid crime thrillers of late. It simply has nothing new to offer, no unusual ideas, set-pieces or scenes, no new dialogue - nothing, other than the gimmick of having screen icons De Niro and Pacino sharing the limelight for more than ten minutes. As a great fan of both, I really wanted that to be enough, really wanted these two great men to carry whatever movie they were in just by their sheer presence - even just by doing what comes most easily, which in Pacino's case is shouting a lot, and, in De Niro's case, involves repeating phrases in increasingly menacing ways. Here we don't even get that.

With one-dimensional characters populating the entire affair, it is difficult to tolerate let alone enjoy this movie. De Niro's Turk is just a diluted standard angry De Niro character, not a million miles away from the character he himself parodied in Showtime. Pacino's Rooster (who came up with these names?) is almost a non-entity, not even a character in his own right, identifiable only by the fact that he occasionally looks shifty, and is apparently good at chess. Arguably De Niro put more effort in than Pacino, almost carrying the movie but for a terrible choice in outfits and some lacklustre one-liners. He just doesn't exude the professionalism or power seen during his last run of decent movies - Heat, Casino, Ronin - and whilst he is more than enough to carry his share of the film, he is let down by partner of all people, Pacino, who appears to just sleepwalk throughout the whole movie. Appearing to just be necessary for one contrived plot element, he isn't even very effective as a foil to De Niro's Turk, only given room to breathe more than halfway into the overly short runtime of this drama.

The cast list is populated by myriad familiar faces, but they're each as wasted as the next one, with Donnie Wahlberg (Mark's brother, who was in the Saw sequels) and John Leguizamo (who debuted opposite Al Pacino in the far superior Carlito's Way) as supporting cops, an aged Brian Dennehy (Cocoon) trying to beef around as the Captain, Carla Cugino (the ridiculously hot chica who was Mickey Rourke's parole officer in Sin City) degrading herself a little as the slightly deviant (and unconvincing) love interest, and - of course - fiddy cent, aka Curtis Jackson, playing a gangster-dealer (what else?). Oddly not the worst thing about the movie, he is still a sure fire warning that this was not going to be a quality thriller.

The Director, Jon Avnet, is the man behind Fried Green Tomatoes (back in the day) - which was actually pretty good, but more recently he's been responsible for one of the worst Al Pacino movies ever, 88 Minutes. So bad it had to be re-edited several times and with the release delayed significantly to try and cash in on the potential success of this very movie, it marks another example of utterly wasted talent at the hands of this Director. I don't know what he was thinking, but he should have gone and watched Heat a few times before he attempted to make a De Niro / Pacino crime thriller. Maybe he would have learned something. I love De Niro and Pacino, and I miss and mourn the golden age of their career, but in their twilight acting years they just don't seem to be ageing as gracefully, and Righteous Kill marks yet another reason to be dubious about their most recent work. Don't be misled by the potential of these two great actors in a cop thriller, just save yourself the disappointed and skip this one, and go back and watch Heat again.