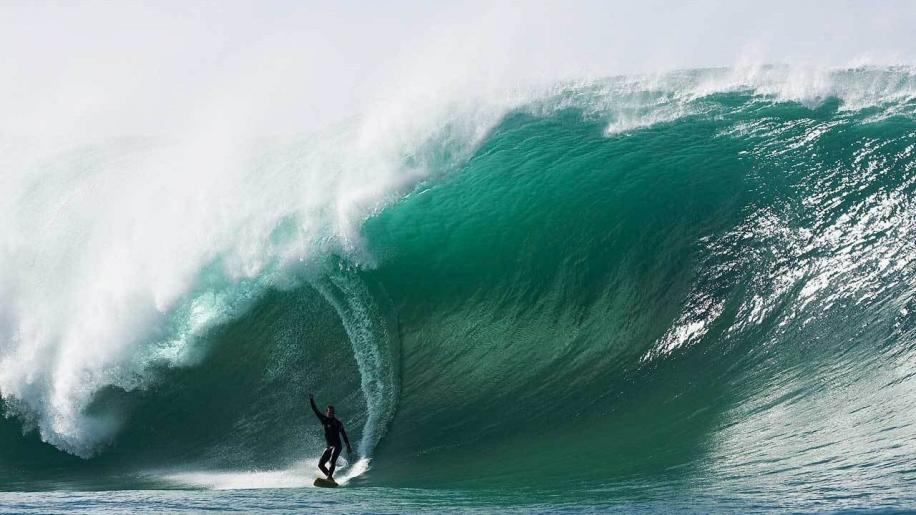 Riding Giants is presented as an Anamorphic 1:85:1 image. As mentioned in the movie review, it is a collection of archive footage and talking head interviews - the image quality of the former parts varies greatly and is mainly home cine-camera footage from the 50's and 60's that contain a plethora of defects, but it would be unfair to criticise the DVD for this as they are inherent problems from the source. The interview footage and the actual transfer itself are fine, with no technical problems to speak of. It certainly isn't IMAX material but is completely functional for what it needs to achieve. Again, no-one would expect demo material here and that actually works in this discs favour as it does contain a DD5.1 soundtrack - although the rears are mainly used for padding out the musical soundstage as there is little opportunity for any surround effects to be used. The music used here is quite diverse and does sound good in 5.1 whilst the narration is clear and rich. The sound on this disc is completely functional but the studio should be praised for not rolling out a DD2.0 track as is often the case with this kind of movie. As this is a Special Edition release, there are quite a few extras, but being a documentary with an already narrow focus, by their very nature these extras may be for the hardcore only.

First up is a Director and Editor Commentary featuring input from Stacy Peralta and Paul Crowder. I was pleasantly surprised to discover that this commentary was still enjoyable despite my lack of surf knowledge, covering the production of the film, editorial decisions and so on. One thing that was slightly disappointing was that when discussing the musical score (which is very good), the original soundtrack was muted so you couldn't always relate their comments to the songs they were talking about.

The second commentary is a Writer and Surfer Commentary with Greg Noll, Jeff Clark and Laird Hamilton. As you can imagine, this is probably reserved more for the avid surf fan as they discuss terminology and make reference to people that most of us wouldn't know anything about. Although it may not be for the uninitiated, it is good that it is present as it gives the disc some longevity for those who become inspired to return to it later.

There are 5 Deleted Scenes (totalling 15.41 mins), 'Surf Talk', 'Wave complexity', 'Half Moon Bay', 'Original ending' and 'End Credit Sequence'. Mr.Peralta has thankfully provided a text introduction to each scene explaining why they were removed and what they signified.

Fuel TV's Blue Carpet Special (20.22 mins) is a featurette covering the movies premiere in Hollywood. It contains interview footage from all of the main cast and crew.

The Making Of Riding Giants (28:04) shows how this film actually came into being - it wasn't originally even going to be about surfing but Greg Noll's infectious personality and exciting stories made Peralta decide to focus on this story instead. The main surfers featured also talk about their contributions to the film and how they became involved. There is quite a bit of repetition between the featurette, the two commentaries and the Making Of and I wondered how much of it had any repeat viewing potential. Finally there are three trailers of 'Being Julia' and 'Bobby Jones: Stroke of Genius' Riding Giants is an interesting film but its wordy presentation and narrow focus may put off some people, however those who want to know more about surfing history and its pioneers or those who enjoyed Dogtown and Z-Boys should definitely check this out. The extras on this special edition release add value; however they are probably not for casual viewers but for those who are seriously into their surfing history.