It’s Taken meets The X Files’ Lone Gunmen. And it’s twice as rewarding as that sounds. 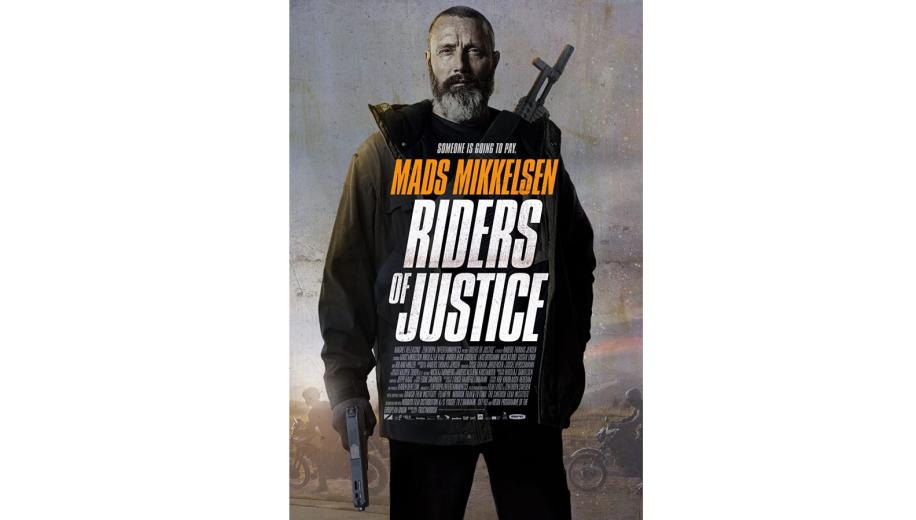 “Oh, another Liam Neeson movie…” is frequently now the reaction when another Liam Neeson movie drops. They’ve moved past self-parody and, well, into the realm of just being a bit boring (see Amazon’s recent The Marksman). The ‘Neeson takes revenge’ genre has become such a cheap and easy go-to for filmmakers that when you see a movie advertised as “ageing actor takes revenge on biker gang” you’d be forgiven for giving it a wide berth. In the case of Anders Thomas Jensens’ Riders of Justice, that would be a big mistake.

The eponymous Riders of Justice are an infamously brutal Danish biker gang whose leader is about to be brought to justice. Days before his trial, critical informer ‘The Eagle’ is caught in a million to one train accident, killing him and many of the other passengers. Among those counted among the dead is the wife of war veteran Markus and when a survivor of the accident, statistical mathematician Otto, seeks him out claiming the “accident” was engineered, the two team up to put an end to the Riders of Justice.

Billed as a revenge movie, A Danish Taken where consummate terrifying presence Mads Mikkelsen (Another Round, Hannibal) employs his military skills to take down a series of baddies on a quest for revenge, Riders of Justice is much more complex than expectations might have you believe. Part comedy, part tragedy, the film threads a needle between satisfying elaborate plans for revenge and often hilariously puncturing the self-seriousness of similarly themed movies.

Aiding this deflation are the squabbling team of computer and data scientists eager for both justice and righteous action. The three of them, Otto, Lennart and Emmenthaler, played with huge argumentative glee by Nikolaj Lie Kaas, Lars Brygmann and Nicolas Bro, are the secret weapon, the element which keeps the movie fresh and fun. It is their dynamic that elicits some of the biggest laughs as they rail against each other’s foibles and attempt to tie up payback for years of being bullied as nerds with Markus’ quest for bloody vengeance. They are the light which balances Markus’s darkness to create a movie which is hyperconscious of its tone and knows how to play with it for both bathos and pathos.

This juxtaposition of playful and dangerous is evident from the very outset of the film in which a kindly old grandfather asks a little girl what she wants for Christmas. He offers her a red bike which the girl turns down. “I want one in blue.” She states to the bike shop owner, “Can you get one?” The grandfather kindly and knowingly smiles with a “Well, you never know,” response and the camera turns back to the shop owner shortly before the scene cuts to a beautiful blue bike being stolen. It’s a fun indication of how comfortable the film is to become, pinning wholesome silliness to violent crime.

Building further layers into this toying with light and dark is the cinematography by Kasper Tuxen which plays with light and shadow in every scenes, only ever half lighting the characters, keeping them right on that line upon which the whole film balances. The soundtrack too flips between harsh and angelic tones, albeit in a less well integrated way.

The heart of the movie is the relationship between Markus, played by Mikkelsen with severe emotional stunting, and his daughter Mathide (Andrea Heick Gadeberg game for both a bit of fun and a lot of tears). Their relationship is what gives the film its emotional momentum, even through the extraneous characters who flit in and out of their lives. It’s a believably hostile father/daughter relationship during a time of great stress for both.

... a bold take on the hackneyed Neeson-dominated genre...

Intentional or not, it does suffer some of the shortcomings of one-man-army movies, particularly when it comes to fully realised villains. The gang are no more than cardboard cut-out bad guys who do bad things because they’re just… bad. For relatively slim reasons, they torture, threaten, and repeatedly use homophobic slurs as shorthand for general nastiness. In fact, despite using slurs to paint the biker gang as necessarily unsympathetic, the film could live with a little more self-consciousness as it has kind of an issue here in general, sometimes falling prey to playing its Ukranian gay character for cheap and very awkward ‘laughs’.

What makes Riders stand out among its contemporaries is its refusal to glamorise revenge, or the violent path taken to achieve it. Framed as a psychological disorder, the desperation of Markus’s quest for justice pushes away the people who are offering him the greatest support. The film is openly critical of the hypermasculine stance against talking problems through and, although there is fleeting satisfaction in seeing swift and harsh punishment of those who do bad, the lasting ramifications of it do more harm than good.

It's a bold take on the hackneyed Neeson-dominated genre, openly demonstrating the subtler problems of the premise throughout the film, or it would be if not for its exasperatingly messy final act. Two thirds of the way through, a key plot point attempts to dispel any remaining vicarious enjoyment from the killing of others, before completely walking back that stance in its heavily telegraphed and maddeningly predictable final confrontation of a finale. The ethical switch from the majority of the characters is almost whiplash inducing as the film fails to fully break away from the genre it has been attempting to pick apart for the previous 90 minutes. It's an unfortunate end for what is generally a film far more interesting than its promotional material would suggest.