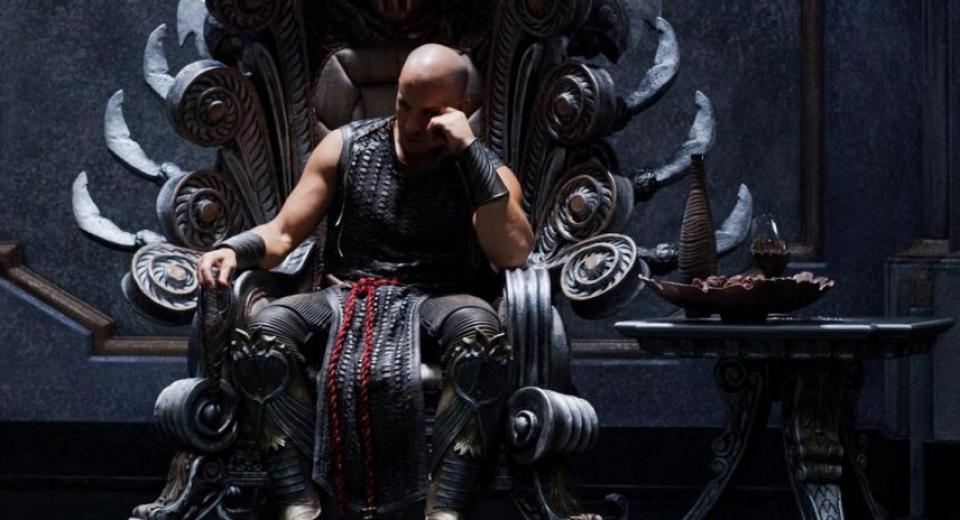 Almost a decade after we last saw him, Riddick returns to the Big Screen... but things aren't quite as big anymore. Gone are the vast possibilities offered by the Necromongers in their Underverse - abandoned perhaps as much by necessity as by choice, given the vastly reduced budget that restricts this third outing - and instead we return to a familiar world of mercs and monsters, where Riddick is forced to get all primal in order to survive.

Whilst returning Director David Twohy and franchise star Vin Diesel have both been championing their Riddick ideas for years, it seems, rightly or wrongly, that they felt something of a reboot was in order, both to reset the score after the damage done by the ambitious but flawed, bloated and unruly Chronicles of Riddick, and to also try and capture the attention of a new audience who may not even remember their stunning low budget debut, Pitch Black, which remains to this day a benchmark example of great ideas, tense set-pieces and minuscule budget used to full effect. Consequently Riddick feels more like Pitch Black 2.0 than a full-blown sequel to Chronicles, and you get the impression that they wanted (or were forced) to go small in order to test the waters and see whether there was a market to go big again.

The story sees Riddick left for dead on an unknown planet where every creature he encounters wants a piece of him, from the vultures to the jackals to the strange sea-scorpions that slither around below the surface. After triggering a distress beacon at a mercenary outpost he lies in wait for the hunters to arrive, so he can hunt them and get off this godforsaken world. He has a time limit though: there's a storm coming and, with it, rains that will see those mud-dwelling creatures swarm over the sodden ground and kill everything in their path.

Vin Diesel has basically made an entire film career about two trademark characters in two distinct franchises: action-thriller The Fast and The Furious's street-racing convict anti-hero Dominic Toretto and sci-fi thriller Pitch Black's murdering escaped convict anti-hero Richard B. Riddick. It took a while for him to get Fast & Furious back on track but the show has finally morphed into a thoroughly entertaining - and massively successful - ensemble heist series. It's still derided by those who can't get over its flimsy Point Break rip-off origins and abysmal first sequel but, for those who stuck it out, the series is now immensely rewarding, more than any fan could have ever possibly hoped for.

Betrayed again, shoulda seen it coming. Especially since the first time it happened was the day I was born.
Yet Riddick has always been Diesel's true love. After the success of Pitch Black he collaborated with writer/director David Twohy to come up with a trilogy of tales to market to the Studios. It was an ambitious pitch, and one which did not go quite as either of them had hoped for when the first chapter, The Chronicles of Riddick, bombed. Whatever happened to the second and third stories, 2013 Riddick was borne almost entirely out of Diesel's Fast & Furious sequel success and re-established Box Office favour, with Twohy - spurred by the home video cult success of the uncut Chronicles of Riddick to believe there was still interest in the universe that he had created - writing an entirely new tale designed to reset the balance.

The end result, however, does not quite achieve that. Whilst it certainly has that appealing back-to-basics feel which saw the likes of Stallone's Rocky and Rambo late-stage sequels garner fan applause, it is ultimately stunted by both the success of Pitch Black and the scale of Chronicles, seeking to, instead of go down an altogether different path, merely blend the best elements of both.
Initially it works, jettisoning the whole Necromongers Underverse in one flashback-ridden opening fell swoop, and instead painting Riddick as a wandering warrior more like Mad Max than the muscle-bound Hannibal Lecter he was first introduced as, some 13 years ago. Hell, he even has a busted-leg-in-a-brace, an asymmetrical shoulder-pad outfit blending a leather bodysuit with a desert shroud, and a wild dog as a companion. But for an unnecessary voiceover, this is probably the most interesting part of the movie - watching Riddick do whatever it takes just to survive.

The next act isn't disappointing, per se, although I can see how it risked alienating those expecting a grand-scale event feature in the vein of Chronicles (and hence see why it ultimately had to devolve into an Aliens-style man vs overwhelming forces of monsters finale). Riddick vs the Mercs is pretty well done, actually, taking on the kind of stalk-and-slash approach you would expect more from a serial killer horror than a sci-fi action-thriller. Baring its distinctly R-rated teeth (both Twohy and Diesel clearly determined not to go down the ill-advised PG-13 route of its predecessor), bodies are torn apart is unabashed gory glory, and, had they stuck to this - admittedly limited - angle, this film may have garnered more fan applause and less unwanted comparisons. Whatever happens, no matter what they tell you, don’t let them take the chains off me.
Things start to become all too familiar once the monsters come out to play, although, for many, the death knell may have already been tolled. There's no question that this third act struggles the most: Twohy's dialogue and Diesel's delivery threatening - with varying degrees of success depending on your susceptibility and forgiveness - to take you right out of the film. And that's even before we go down the overly familiar Pitch Black route of running through dark rain-washed valleys full of demons.

Central to the biggest issues that viewers have had with this film is the character played by Battlestar Gallactica's post-Millennial Starbuck herself, Katee Sackhoff. Dahl, whose name itself demands criticism because it sounds like the filmmakers used it as a flimsy excuse to make it sound like everybody is calling her 'doll' throughout, is a poorly-painted heroine. On the face of it she should be someone we can admire - tough and no-nonsense, and great with a sniper rifle, she repeatedly breaks the bones of a sleazy sexist fellow Merc for verbally assaulting her. But, despite the sticks and stones, and broken bones, it's the words that do the harm, and Dahl herself feels like the impotent one of the bunch, particularly when Riddick dispatches his soon-to-be infamously immortal 'balls deep' line, seemingly capable of ridding her of her homosexual predisposition purely by flexing his murderous muscles. That it is shown to actually work on her says more about the adolescent, puerile sentiments of the filmmakers than the state of society today as, thankfully, many have recoiled over this misogynistic malaise.

Still, for some - this reviewer included - it was not enough to ruin the film. Sure, it seems like Sam Peckinpah's sexist spirit is alive and well in this feature, but that does not mean that it is the rotten core corrupting the heart of Riddick. No, this long-gestating sequel has enough valiant ideas, nice set-pieces and memorable moments to justify a watch, irrespective of its misguided attitude towards its female characters.

Diesel has aged, but he still reminds us of why he was born to play this character, and while we don't quite get the solid character-arc that he underwent in Pitch Black - from ostensible villain to reluctant anti-hero - there's a faint hope that may well be the start of something special; Twohy and Diesel returning the character to his animalistic routes as they forge a two- or three-picture journey back to his post-apocalyptic home world.
Don't know how many times I've been crossed off the list and left for dead. So this, this ain't nothing new.
Almost all of the other cast members struggle to be memorable in their roles. Sackhoff pouts, punches and bares flesh in an attempt to finally secure Big Screen favour, but is ultimately - as aforementioned - limited by the script; Jordi Molla, the go-to guy for Spanish drug cartel boss roles (Bad Boys II, Knight and Day, Colombiana), is unpleasantly and uncomfortably committed in his over-the-top, disgusting, despicable rapist pig scum-bag Merc leader role; and Dredd's Karl Urban is in this film so little that they might as well have just shown clips from Chronicles rather than get him to reprise his role for all of 30 seconds.

Indeed the only hope for a decent role allowing for an interesting performance was the tie-in to Pitch Black itself, Merc Boss Johns. Unfortunately little-known Australian actor Matthew Noble (Killer Elite) simply wasn't up to the task and, in spite of the clear limitations of the script, he is obviously out of his depth in a role that, with a bigger budget, would have gone to an older, more well-known veteran actor brimming with presence. It's Johns' arc that is arguably integral to the tale - perhaps as much as Riddick's - and yet it simply does not have the right effect or impact.

Talking about effects, there are two ways of looking at the visuals on offer within this latest chapter: either you can dismiss them as being little more than you would expect from a glorified straight-to-DVD sequel (indeed, were it not for Diesel's newfound success, I'm sure that's the only market Riddick would have found) or you can praise it for being far more impressive than the limited $38 Million budget commands. Personally I'd have preferred them to return to the real-sets-skewed-with-post-production effects settings of Pitch Black rather than the CG-tastic realms of Chronicles, but, for the most part, Riddick offers a decent enough backdrop. Obviously the stormy night sets are better than the Star Trek: The Original Series-inspired day ones, and they've clearly skewed the budget towards the opening and closing sequences in an effort to make you forgive the limited scale of what's in between, but it largely works. Did we need the hoverbikes? Probably not. Do the spacecraft convince? Seldom. But, at its best, Riddick crawls around and gets down and dirty with creatures that may not be wholly original, but certainly look pretty viciously effective. And even his lost puppy companion didn't wholly go down the potentially infuriating Lucas / Jar-Jar route I was concerned about, remaining securely on the side of Max.

The violence is also refreshingly adult, and even the increasingly preposterous Rambo-inspired manner in which he repeatedly fixed his broken bones and mortal wounds is forgivable, as are the increasingly over-the-top kills - including one unabashedly ludicrous but undoubtedly satisfying decapitation.