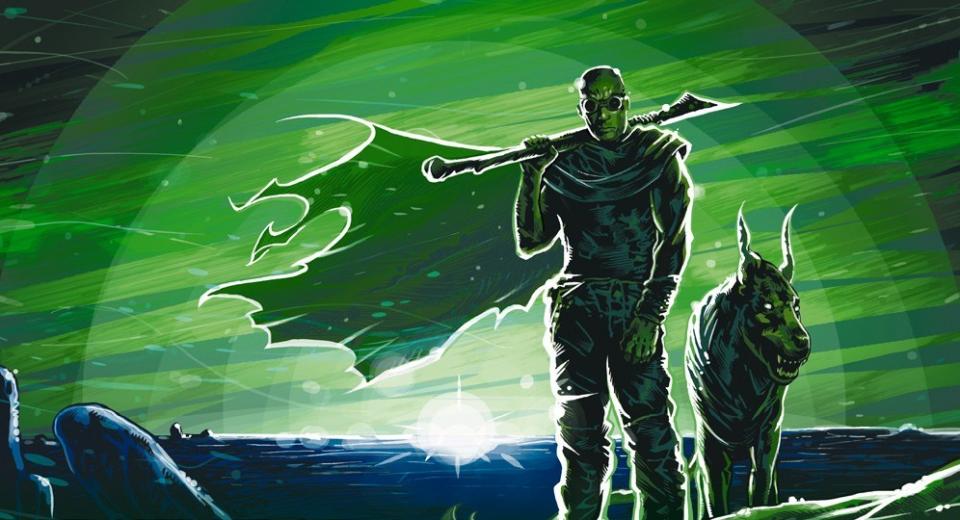 Riddick is a flawed, occasionally muddled, frequently misogynistic sequel that nobody in particular was really crying out for, to a series that nobody really expected to hear from again.

But it still delivers on several welcome counts and, more importantly than anything else, resets the balance so that there may well once again be a future for the franchise. Brazenly adult, refreshingly violent and, for the most part, cleverly back-to-basics, Riddick follows the same suit as many other recent post-hiatus sequels, including Stallone’s Rocky Balboa and Rambo, and similarly just about puts the series back on tracks.
Indeed if they maintain this level of tenacity and enthusiasm for the world that they have created, writer/director David Twohy and franchise star Vin Diesel may well eventually reclaim the magic of their Pitch Black debut. In the meantime Riddick is a nice little stepping stone; flawed, often flimsy, and inherently limited, but also quite tense, exciting and entertaining. Don’t expect the strengths of Pitch Black, or the ambitious scale of Chronicles, just something in between, for better or for worse.
The 8-minute longer Director’s Cut boasts an extended flashback sequence with the Necromongers (basically a filmed version of the Animated Prequel, Riddick: Blindsided, which is amongst the extras), which takes up the majority of the longer runtime, as well as a nice little book-end which rounds things off far more satisfactorily in that respect, and also leaves things open for a – hopefully – fitting further chapter.
This may be a mere stepping-stone in the universe of Richard B. Riddick, but it opens up an opulent universe of possibilities. Riddick, in spite of its relatively small budget and corresponding effects restrictions, looks tremendous on Region B-locked UK Blu-ray. The High Definition 1080p/AVC-encoded video presentation comes in the movie’s original theatrical aspect ratio of 2.4:1 widescreen and promotes excellent detail, stunningly-crafted alien worlds, fine close-ups and skin texture observation, and welcome background texture. The crystal-clear sharpness, and relative lack of corresponding digital defects – edge enhancement, excessive DNR application and so forth are non-existent – leave this sequel easily contending with the big boys on the visual front, and even some of its more obviously cheap effects shots appears to look acceptable (some more so than even at the cinema).


Riddick certainly looks as good as it did in the cinema – and perhaps occasionally looks even better.

The colour scheme, despite being significantly skewed towards the gold-brown alien environments, boasts rich tones that do attempt to break free of the dusty, limited planetary spectrum. Black levels are the only real hesitation for me, with the majority of the movie promoting some excellent black tones, rich and deep and enveloping, but a few touches – in the dead of night – showing up a hint of blocking and even a smidge of ringing. Shadow detail is still there, and the inky blacks certainly don’t swallow anything up, but the blending is not always seamless, with edges showing and occasionally, disintegrating into visible blocks. It’s nowhere near enough to ruin this outstanding visual presentation, nor prevent this edging into demo territory, but it is enough to knock this off a perfect score.

The accompanying DTS-HD Master Audio 5.1 track, on the other hand, comes with absolutely no reservations. It’s one of the most fully-immersive, thoroughly engulfing audio presentations that I’ve come across recently, sweeping you up and attacking you from every angle, and – perhaps more so than many other tracks I’ve reviewed lately – boasting stunning use of the full sound array, including the rears. Yes, there are some fine little touches which the rears bring to your attention, and it works extremely well, heightening the tension, and making you feel under threat of attack from every and any angle.


Unforgiving, oppressive, engulfing and immersive, Riddick boasts stunning audio, and will give your rears a particularly relentless workout.

The quieter moments are just as dynamic as the louder ones, and atmospherics are very well handled, with the score further enhancing the proceedings, and a suitably threatening layer of LFE input stomping throughout, relentless and oppressive. Dialogue rides clearly and coherently atop the rest of the material, and overall this is an outstanding track, reference quality and a perfect 10 through and through.

The UK release of Riddick boasts the same welcome selection of extra features as the US counterpart, headlined by the option to watch either the Original Theatrical Cut, or the Extended Director’s Cut, which runs at a further 8 minutes in length and is clearly superior in every way. Beyond that we also get a small animated Prequel called Riddick: Blindsided, which kind-of acts as an elaborate storyboard for an extended version of the extra footage from the beginning of the Director’s Cut.


5 Featurettes and an Animated Prequel make up the bulk, but it's the superior Extended Director's Cut that you really came here for.

The quintet of Featurettes is each 5-10 minutes long, but complement each other well, and cover a series of interesting elements – Vin’s Riddick and The Twohy Touch probably being the two best, respectively looking at the actor/producer’s and then the director’s involvement in the franchise, the former’s championing of the series and securing of the funds for a further sequel, and the latter’s vision when it comes to the Riddick universe. Meet the Mercs looks at the cast, whilst The World of Riddick details this interesting new planet, and its various native species. Rounding out the selection Riddickian Tech is a nice little sci-fi-laced Featurette looking at the innovative future technology used for the weaponry, hoverbikes and ships. The disc is rounded off by a few Preview Trailers.

I don’t know whether or not Riddick was successful enough to guarantee the future of the franchise, but its Extended Director’s Cut certainly appears to support that notion, with further bookends which only enrich the mythology and suggest that there may well be even be more than just one more film, with Riddick making one last stop before he finally returns home to Furya. If you enjoyed Pitch Black, and were able to look past the flaws of Chronicles, then this back-to-basics sequel is a worthy addition to the saga, particularly given the fact that it’s been dead in the waters for almost a decade now and Riddick has single-handedly brought the franchise back to life.

On Region B-locked UK Blu-ray we get excellent video and audio as well as a nice selection of extras, the best of which is probably the option to watch the superior extended cut of the movie. Fans of the growly anti-hero should not hesitate in picking this up.