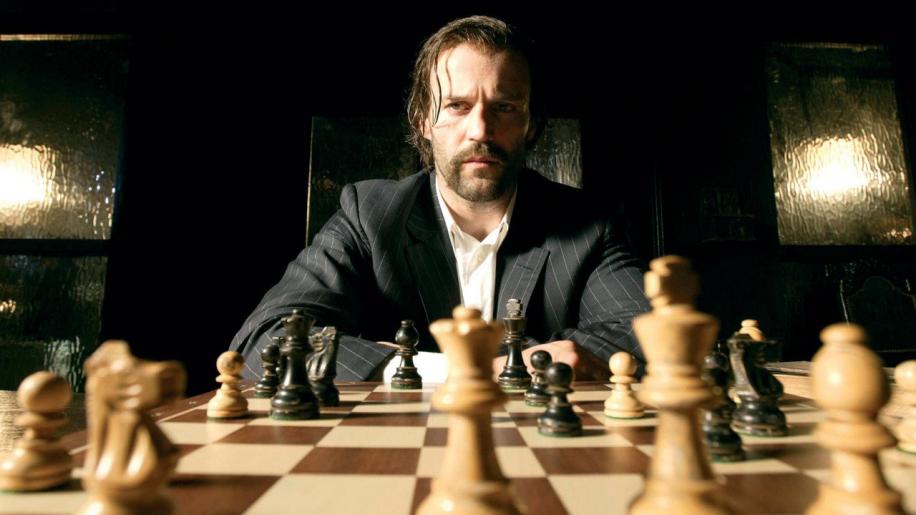 Cor blimey, love a duck, blinkin' frog an' toad, me old cockernee sparra. There is nothing more than we Brits like than to cheer our rising stars, or root for the underdog. Why then do we see so much pleasure out of failure? It is a sad indictment of our society when such individual misery can provide millions with glee. Guy Ritchie was such a rising star. Back in 1998 he helmed Lock, Stock and two Smoking Barrels, revitalising a flagging (again) British film industry. His subsequent success with the follow up Snatch proved to be a welcome change and things were looking good on the Ritchie horizons. Then something happened to the media's portrayal of him. He became Mr Madonna. He then put her in his next feature Swept Away, a monumental stinker. The tide had turned, what was once a rise to stardom and success quickly turned out to be a stab in the back. It took him three years to get back into the directors chair; to helm a feature that brought him that fame and recognition of 1998, the gangster movie. The film is called Revolver and it might be the last film Ritchie will make. Those that know of the film will have already heard the universal panning it received at the hands of the cinema critics. Such foreknowledge can sometimes be fortuitous, surely it can't be that bad; if you are prepared for the worst, you might also be surprised. And in fairness to Mr Madonna, I never jumped on the bandwagon to hail his movies as the next best thing, so his fall from grace meant nothing to me. So with that in mind I can confidently say that Revolver is not that bad, but it is a very, very long way from being any good.

The story, such as it is, has Jake Green (Jason Statham) returning from solitary confinement, after seven years, to a casino owned by gangster Macha (Ray Liotta) to win some money that he feels is owed to him. Green is an expert gambler and normally refused tables, but Macha (it was a job Green was doing for Macha that landed him in gaol) let him sit at his and he losses a small fortune. Immediately after leaving Green collapses and is diagnosed with a rare blood disorder that will leave him dead after three days. During this time he is contacted by Avi (André Benjamin) and Zack (Vincent Pastore), two load sharks that offer to protect Green from reprisal by Macha but at the cost of loaning Green's own money. While with Avi and Zack, Green steals drugs from Macha, who is storing from some enigmatic criminal overlord called Sam Gold, and thus engineers a war between Macha and his closest rival Lord John (Tony Wu). On the morning of the third day when Green wakes as normal, things take a different turn; when he was in solitary, either side of his cell where two men, an expert chess player and a con man. This pair communicated with each other by writing in the backs of books and conceived of the biggest con of all time. Green learned all he knew from these to men, they in turn learned from him, and when they escaped they stole everything he had. After confirming that he will live, Green reassesses his relationship with Avi and Zack, realising that he is involved in a huge con, or conspiracy; upon realising this he has to change the rules to defeat them, Macha and save his brothers little girl, Rachael, whom Macha has kidnapped in order to get to Green.

The film is very much of two halves; the first plays out very much like a standard Ritchie film, smart gangster takes on flash gangster, wins, then reprisals take place. The introduction of Avi and Zach add a nice little twist to the plot as Green plots and counter plots to try to understand if he is being conned, or if this is all really happening. The second half, after Green wakes on his third day, all rhyme and reason leave the room to be left with philosophical psychobabble and musing, and an incomprehensible wild mess that neither answers any questions from the first half or rounds the film off to any sort of satisfying conclusion. Ultimately this half ruins the film, I'm an advocate of non-linear time lines and I don't need all my questions answered, but when I film sets out to confuse on the pretence of legitimacy, confuse it will. No one was fooled, least of all the cinema going public.

What is such a tragedy is that there are real moments of excellence in the film. Witness the female assassin set piece in the restaurant; Macha's men, in an effort to protect him, actually put him within range of her injured body as she tries desperately to carry out her mission. There is obvious inspiration from John Woo here, it is all shot in slow motion and set to the delicate piano tunes of the Mozart. Witness too Matha's own hit man Sorter (Mark Strong) a neurotic killing machine set against his own men when they want to torture a little girl. A powerful ballet of a section as he stalks the house taking everyone with ease, ending as all the best dramas do, in tragedy. However, such scenes are far too sporadic to maintain any sort of belief in the film, juxtaposed as they are by scenes of utter lunacy. Green literally having an argument within his own head, shot in dark blue that goes on and on and on, having it end with Liotta aiming a gun in leopard skin underpants tearfully whispering “fear me” (I kid you not) do nothing to improve matters. Worse still is that the film actually looks good. There are some terrific camera moves and nifty editing, especially in the above mentioned scenes that really add much. The score too helps to really set the mood. There are also some wonderful ideas and a tantalising glimpse to what could have been; was the omnipotent Sam Gold actually Green himself; did he ever leave his cell; were Avi and Zack actual people or figments of Green's own mind, a la Fight Club? However, when the final credits roll, or not in this case, everything is left open and all that is left is a sense of despair at what could have been.

If the tide hadn't turned against Ritchie, still this film would be rubbished. It is inconsistent, confused and ill-conceived. Even the actors seem to be going through the motions; with such stilted, clichéd dialogue as they have to speak, I'm not surprised. Jason Statham was the main anti-hero of the movie, but really he doesn't actually do anything except look confused. Liotta just looks fat, Vincent Pastore plays the same character he does on the Soprano's. Ritchie does like to fill his films with familiar faces, and this is no exception, but not one of them stands out from the crowd, perhaps they wanted to remain hidden. Perhaps too this entire film should remain hidden, it's not that bad, but I won't be watching it again any time soon, and I doubt many others will either.

Revolver starts out very strongly and for a while you think the critics have got it totally wrong, it's stylish, includes some nice dialogue, one or two really cool set-pieces and some really interesting minor characters such as Macha's hitman Sorter (Mark Strong). However problems start to arise due to the introduction of more and more characters to the mix and it does start to get a more than a little confusing. Add to this the films non-linear structure and flashbacks and you get the impression that Ritchie got kind of lost himself, which is a shame because there is an excellent movie here that is desperately trying to get out. Despite all this I was still enjoying Revolver and I had just about worked out who everybody was and who they were trying to kill, until Jake decides to have an argument with himself on the elevator in Machas apartment. It's a segment that goes on for too long and despite liking Statham a lot, he does not have the acting chops for a scene such as this. The movie starts to disintegrate and the abrupt and ambiguous ending does not help matters either, even though the plot twists are not too difficult to work out

For audiences expecting another Ritchie cockney shoot-em up, they will have been left mightily confused, but its not all bad and there is much to admire, but unfortunately very few are likely to give it a chance.