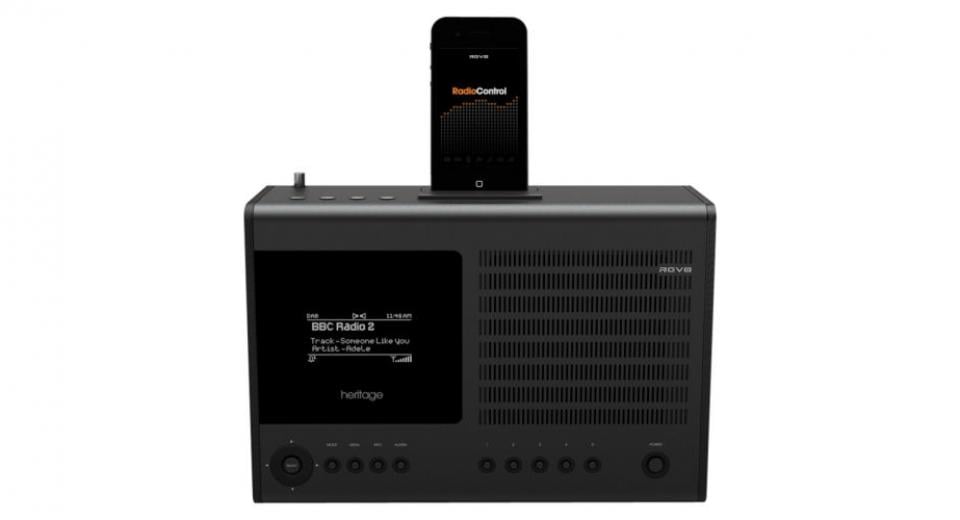 Revo is a Scottish company and relatively young by the standards of some of the brands here. Like Pure, the company’s initial focus was on DAB products but has widened to include internet radio connectivity - which the company has adopted with some enthusiasm - and iDevice connectivity. The Heritage G2 seen here is similar to the Roberts in that the dock is an additional function of the product and not the sole purpose.

In fact the Heritage has the most extensive function set here by quite some margin. It receives radio over FM, DAB and the internet, can act as a UPnP media streamer and can also access podcasts and LastFM. It then has an iPod dock on the top. Revo feels that the best use of your iPod Touch or iPhone is as a remote control however. The Revo Radio Control app is free and gives you full control over all stations, the UPnP library, volume and EQ controls. A remote is supplied as well for those times your iDevice is plugged in rather than acting as a controller.

The Heritage is the only mono design here. It makes use of a single 3 inch neodymium driver powered by a 7 watt digital amplifier. This is backed up by a small rear bass port but the Heritage has the smallest radiating area of any of the designs here. Ironically the Heritage is the only design that has an RCA stereo output and like the PURE has a digital output - in this case an optical socket.

As well as the impressive feature set, the Revo has another ace in the pack - its looks. I am to style and design what John Candy was to hang-gliding but for me this is, by a country mile, the best looking design in the test. As the name suggests, the Heritage pays homage to classic desktop single speaker radios from the seventies onwards - it seemed at one point every household in the UK had one - but the effect isn’t slavishly retro. Revo has made no effort to replicate the tuning window of old radios but has instead fitted and large and easy to read display that will show station and track information. Like the Roberts, alarm functions are also available.

The Heritage makes use of design touches that are entirely up to the minute - soft touch buttons and a menu driven by an up, down, left, right interface for example - and then applies them to a design that is proportionally similar to the classic radios of the past. The normal Heritage is finished in a suitably convincing silver and wood combination but the model supplied for test is the absolutely brand new Shadow edition that is entirely black. The result is very cool - it looks like a radio that has been made out of stealth bomber spares.

The fit and finish is good too. The Revo is carefully assembled and feels solid to the touch. There are some pleasant design touches like the fact the aerial recesses into the body when not in use and that the dock mount is provided with a plastic cover to prevent debris getting in. The remote is equally logical (although like so many others here maddeningly easy to pick up the wrong way around) and considering the number of functions it has to handle, very straightforward. The power supply is a wall wart type with no PSU on the cord which makes for simple placement.

The Heritage and the Tangent are the two most expensive units in the test and there is a certain irony that they couldn’t be more different in their design and approach. The Tangent is a pair of speakers with a small amount of connectivity added. The Revo is a fabulously specified head unit with a speaker built in. Exactly which one will suit you best will depend largely on the requirements you have of these devices.

The Revo does a very commendable job of not sounding like a mono design. It is a fairly eloquent demonstration that when a left and right channel are mounted as close together as they generally have to be in an iPod system, a mono design is not going to be at a significant disadvantage. The Revo is perfectly capable of filling a reasonably sized room with a perfectly acceptable sound level.

The lack of bass radiating area does show though. Even in comparison to the relatively lean Monitor Audio and considerably less expensive Roberts, the Heritage feels a bit lacking in low end shove. It manages to convey the presence of bass but not the impact which is a bit of a shame. Things can also get a little congested when listening to very complex pieces of music. Instruments and vocals that the Monitor Audio places with ease can sometimes be lost in the mix on the Revo. Streaming lossless FLAC to the Heritage is perfectly listenable but doesn’t really improve matters much beyond that of Spotify or other compressed material.

The news isn’t all bad though. The tonality of the Heritage with voices and instruments is extremely good and like the Roberts, the company origins seem to shine through with radio material. The Revo is excellent with speech and makes stations like Radio Four and Five extremely easy to listen to for extended periods. With internet radio offering thousands of such stations ranging from the deeply intellectual to the borderline psychotic, the Heritage is well placed to make the most of this material. The reception I gained from FM and DAB was also excellent.

If you are looking at a model from this group test to be your sole piece of audio equipment, the Heritage is probably not the right choice. It is not able to go toe to toe with some of the more sonically capable designs here. The Heritage does have some considerable advantages if it is joining a house to be used in a study or kitchen however, where you are less likely to be listening at a hyper critical level. If you are already using streamed audio, you can park the Heritage on your network and have complete access to your collection and the wonderful world of internet radio and rarely, if ever, actually need to plug your iPod in. It is a joy to use via the app and looks fantastic either in the conventional or the shadow finish. As a piece of desktop audio, the Revo takes some beating.