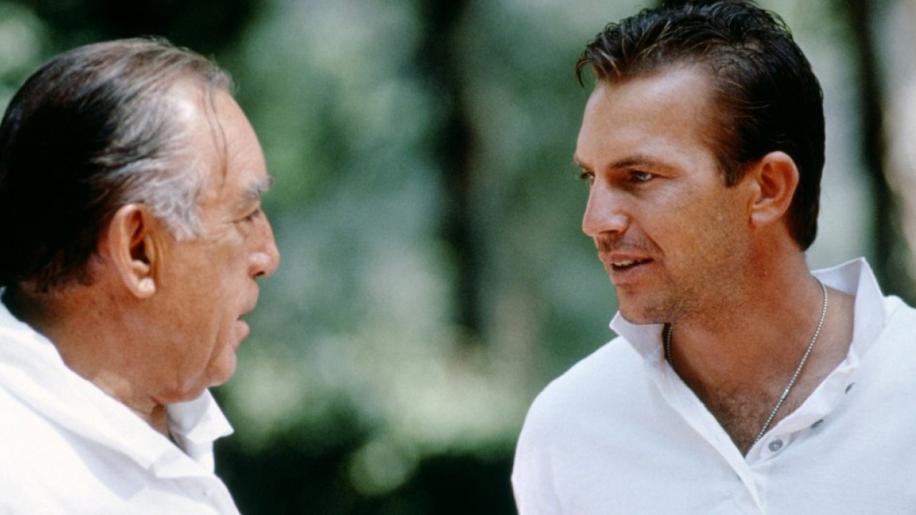 Kevin Costner is clearly capable of making decent movies and putting in decent performances, it is just a shame he often makes some poor choices. The result is a career with highlights that include J.F.K. and Dances with Wolves, and very low points like The Postman and Message in a Bottle. He's provided us with lots of solid roles in between, but one of his best movies is also one of his least well known - Tony Scott's 1990 thriller, Revenge. Made off the back of Costner's success in The Untouchables, it offered a bleak and dark look at friendship, loyalty, adultery and revenge. Costner went on to make the likes of Dances with Wolves and Robin Hood: Prince of Thieves, which effectively smothered any lasting impression that would have been left by this definitively r-rated drama. In the last seventeen years, the popularity of this movie has steadily increased, so a Director's Cut on Blu-ray must have certainly filled fans with eager anticipation.

Michael 'Jay' Cochran is a US 'Top Gun' pilot who has just finished his twelve-year stint with the Navy and needs a break to find a new purpose in his life. He takes a trip to Mexico to look up an old buddy - a man whose life Jay once saved. Tibby Mendez is like a Godfather in Mexico, a rich and powerful old man, who lives the high life in a grand estate patrolled by bodyguard. But his principles belong to a old generation, where trust and loyalty and owing somebody your life means more than just words. Tibby welcomes Jay into his life with open arms, trusting him implicitly - even with his beautiful, younger wife, Miryea. This is where, of course, things start to fall apart. Jay and Miryea, despite some very feeble, lacklustre initial restraint, soon embark on an illicit affair that sees the lives of all three of the characters torn apart in a bitter, twisted tale of betrayal and revenge.

Revenge is a very dark movie indeed, with almost every violent action in its runtime being made out of a desire for some sort of revenge. It is difficult to tell who turns out the worst in this movie, for whilst the girl caught between the two men is left the most physically damaged, arguably it is Tibby who has lost the most - a trusted friend and a beloved wife, leaving him, despite the riches and the power, with nothing really to live for - with Jay rounding off the trio as the purported hero who is anything but, having caused much of the mess himself by his own act of betrayal, and finding his own yearning for revenge has the bitter aftertaste of personal regret for those instigating actions.

I am in no way justifying the horrific acts of violence and degradation that Tibby puts in motion to punish the treacherous lovers, but he is strangely both the most compelling and the most sympathetic character. As much as he will offer love and generosity and utter trust to those he holds dear to him, the door swings both ways and the flipside to his open heart is uncompromising punishment for betrayal. The two lovers knew him, knew this about him and, basically, have to take the bad with the good. The concept of wives marrying men who they then choose to criticise for behaviour they knew about when they got married in the first place has been established in many gangster tales from The Godfather to The Sopranos, and the same should hold true with Revenge. What did these two really expect? A pat on the back and a donation to their honeymoon?

Although Kevin Costner is the big name with the big close-up head shot on the front cover, the actor who really deserves the biggest credit is veteran powerhouse performer Anthony Quinn. One of his last great performances, he is truly memorable as the betrayed husband Tibby, who makes seemingly inexcusable acts of violence and revenge feel somewhat justified. He brings great character and depth to the role and, frankly, acts, Costner and co. off screen in every scene that he is in. Which is not to say that Costner is bad in this movie, just that this is not his baby, and with such a questionable 'hero' character to play, it is difficult for him to gain a positive reaction. Despite being the person through whose eyes we see the plot evolve, he is far from likeable, and the audience is as haunted as much as he is by his own part in the horror that unravels.

The beautiful woman at the core of this drama is the glamorous Madeleine Stowe, who has shined in excellent productions like The Last of the Mohicans and Twelve Monkeys, but is given little room to manoeuvre in this very male-orientated revenge thriller. She is merely the pawn that they push around the board, but she is convincing both as the stunningly beautiful wife and the star-crossed lover who lets her emotions run away with her and take her to hell. Aside from the three leads, there are a few smaller roles brought to life by actors you may or may not have come across - from Robocop's Miguel Ferrer to a very young John Leguizamo (Carlito's Way, Land of the Dead) - and the cameos all do well to enrich the tale.

This is, of course, a Tony Scott movie, and we all know how fond the Scott brothers (Tony and Ridley) are of releasing director's cuts. From Ridley's alternate versions of Alien, Blade Runner and even Gladiator to Tony's alternate versions of Crimson Tide, Enemy of the State and True Romance, the boys never seem content with one take on the action. Admittedly Ridley's director's visions appear to be more warranted than Tony's apparent cash-in extended versions, but of late I generally prefer the latter's movies. His style may not be to everyone's tastes but if you do find you enjoy them, you'll always come back wanting more of the same and getting it (Spy Game, Man on Fire, Domino, Deja Vu).

Revenge was made back in Tony's Top Gun/Days of Thunder glory days, with less emphasis on fast cuts and frantic camerawork, but still no end of style. He provides solid, glossy direction, making a movie that is a heady mix of sex, violence and dark emotions. He has also decided to release this now as a director's cut of his original theatrical vision. Surprised? Well you should be because it is some twenty-four minutes shorter. Now, I was always a fan of Revenge, and when I heard that the new version was dramatically cut (and not for ratings), I was shocked. We're not talking Alien or Blade Runner cuts, where a couple of minutes is trimmed off the runtime - if you remove the best part of half an hour, you are going to lose some significant character-building scenes, and completely change the pacing. As with Crimson Tide, and some of Tony Scott's other new visions of his back-catalogue movies, the score has also been tinkered with, and the end result here is a very different version of the original 1990 movie.

Having recently reviewed the very different, shorter and arguably better Director's Cut of Payback, I was hoping that this new vision might have the same kind of 'different, but just as good if not better' feel to it, but sadly that is not the case. The new version lacks the brooding pace, playing it more as a tense, climactic thriller rather than the dark, more contemplative study of revenge that the original two-hours-plus cut was. For starters, there is that now-trademark Tony Scott flash-forward during the opening credits, where you get a glimpse of a future Costner as the jet fighter screams overheard - I never noticed that before. In addition, the time that elapses before the two foolish love-struck leads get hooked up is now ridiculously short, making you empathise more with the betrayed husband than the fateful duo. There is also more sex, and more explicit sex at that, with plenty of groping and touching and basically grabbing every opportunity to get together. For once a title that justifies its unrated nomenclature, the extra sex also has the effect of establishing the illicit affair as being far more physical than emotional, making you wonder whether this was anything to do with love at all. Aside from these changes, some missing character-building scenes (where is the scene that establishes the 'friendship' between Jay and the girl he picks up in the bar?) and a few extra blows thrown during the severe beating, I did not notice that much different - it is certainly a more streamlined affair but I cannot help but think that this works to its detriment. Revenge: The Director's Cut is still a dark and excellent thriller, it just plays a little too fast for my liking, making it harder to understand some of the behaviour and playing it out as a more visceral, thrill-ride that cascades from set-piece to set-piece, rather than a more epic portrait of betrayal. I would have liked to have seen a release that held both cuts of the movie, but I guess we should still be immensely grateful that a new cut of this movie ever saw the light of day, let alone on the next generation Blu-ray format.