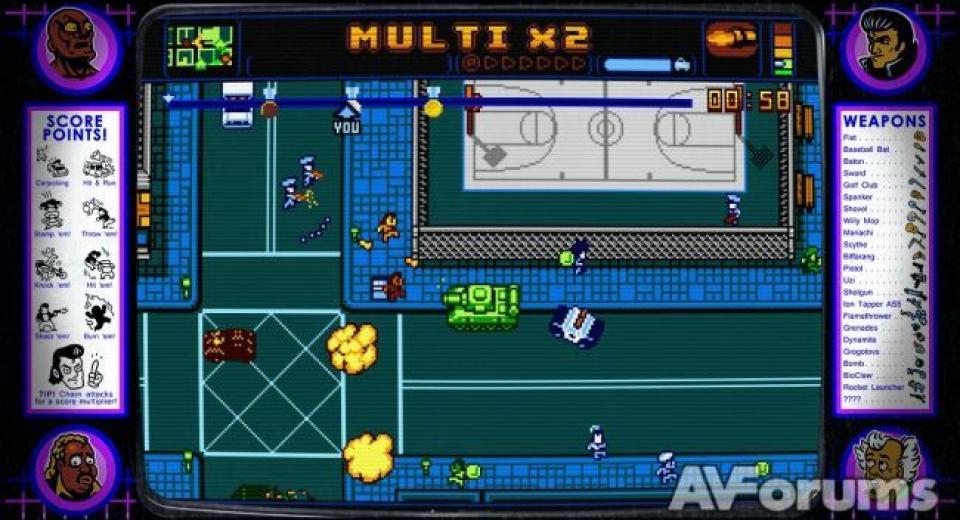 I was looking into the emulator scene recently, and was struck by the investment those Dr Frankensteins are willing to put into piecing together, patching up and reviving their favourite dead games and hardware. Weeks upon months upon years of these people's lives are poured into these projects, and more often than not for very little financial reward.
The video game community is fascinated by the medium's roots, in part because many of us remember those early years when games first came into the home. Emulating old hardware is one manifestation of that obsession. Another is the trend towards embracing traditional, simple graphics in modern indie games (FTL, Terrania and Super Meat Boy, for example). And in the space between those retro-styled indies and the faithfully-recreated emulations, a wealth of interesting niche sub-genres and projects have emerged, not least the "demake".
For the uninitiated, a demake is basically the retrofication of a modern release. Games such as Portal, Fallout 3 and Borderlands 2 have had this treatment, becoming a flash game, an 8-bit JRPG and a 16-bit shoot-em-up respectively.
When Retro City Rampage was first conceived the intention was simply to demake GTA III. However, as the decade between initial conception and release went by, developer Brian Provinciano dropped the idea of a rigid GTA III demake in favour of a more wide-ranging homage to... well, everything. The story is a characteristic mish-mash of influences. "Player" is sent to the future in a blur of Bill & Ted and Back to the Future references. Player must undertake various fetch-quest missions for Doc Choc in order to gather the necessary parts to repair the time machine.
As well as all the 80s movie references, RCR is littered with self-aware observations on a host of gaming tropes. For example, in response to a particular mission brief Player replies, “Not a problem. Running from A to B and doing random things is my specialty”. And it’s hard not to smile in the opening minutes when you are required to redo a tutorial because “... the first time round people didn’t pay attention.”
Given its evolution, it's unsurprising RCR looks and plays very much like an early top-down GTA title. More than 30 vehicles and 20 weapons are available, including rocket launchers, grenades and tanks. Traditional gameplay mechanics have been enhanced with various control tweaks that will be noticeable to anyone familiar with those older games. Steering is incredibly precise, and if you use a pad, Player controls as he would in a twin-stick shooter, which in my experience was preferable to mouse/keyboard.
The tight controls and (initially) humorous nods to some beloved gems of the last few decades make the first hour or so a truly joyous experience. If I'm honest, at the end of my first session with the game I felt that I’d more or less made my mind up: this was a 5* review, a must-have, a celebration of indie development. But the next time I sat down with it, the cracks began to show.
The root of RCR's problems is overload. It’s as if Provinciano couldn’t bear to see any of his precious references cut, and instead tried to cram everything in like an over-full suitcase. Frequently, this results in a kind of mash-up of characters and places, like the “Bionicop”, the Bionic Commando-meets-Robocop boss that Player fights early on; or the section that reimagines the Joker’s bank robbery escape in The Dark Knight as a Frogger-esque minigame.
For a while it’s hugely entertaining, but the novelty wears off once it becomes apparent that there is little substance beyond simple name-checking and fairly straightforward wordplay. It's unlikely RCR's gameplay will be enough to keep most people engaged. Unexpected difficulty spikes and criminal checkpointing suck the fun right out of the experience. There are plenty of sub-missions and mini-games that should provide variety, but again the balance between challenging and frustrating is never struck. Notably, I found almost everything requiring Player to use a projectile or explosive weapon to achieve a goal within a time limit was horrible. The audio suffers from the same problem of overload.  Taken alone, the chiptune soundtrack is superb, as are the faithfully reproduced 8-bit sound effects. But put it all together when the action gets frantic and it becomes a discordant wall of noise.
The real frustration here is that there's not much missing from this decade-long labour of love. If only it had been pruned a little, it could have been the indie classic it had the potential to be. Instead it feels like a great idea delivered imperfectly. I defy anyone to play the first minutes without a nostalgic permasmile, but I would be very surprised if many still felt so warm towards RCR by the end.

Retro City Rampage should have been a sure-fire hit. Overlaying pop culture references from a dizzying array of sources onto a top-down GTA inspired open world sounds like a recipe for success. Unfortunately the game collapses under the weight of everything Provinciano crams in. From a graphical, aural and content perspective, RCR overwhelms and beyond the opening minutes or hour there’s limited fun to be had. Worth a look perhaps, but first impressions might be misleading.