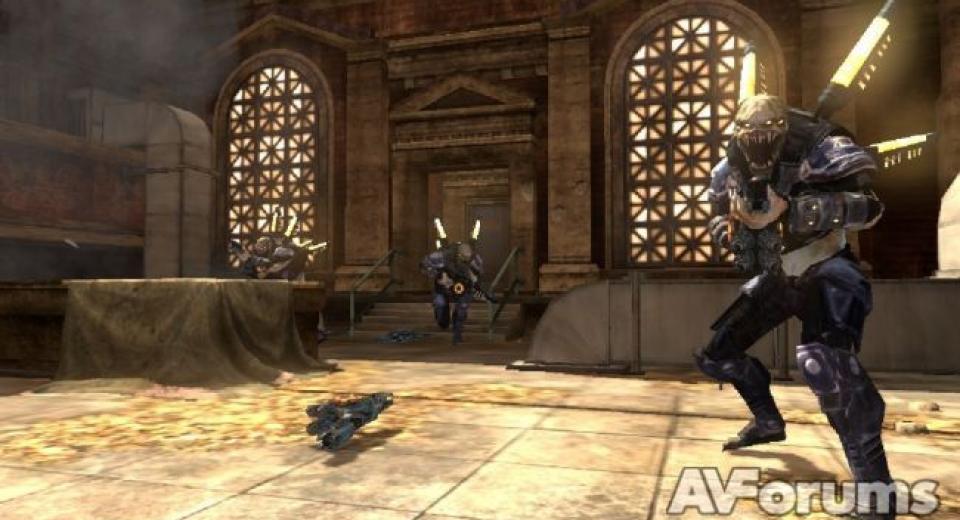 Every new system needs a healthy array of games. With the Vita released some months ago, and the inclusion of a second thumbstick in comparison to Sony's previous handhelds, it's hard to believe that Resistance: Burning Skies is Vita's only First person Shooter and it's taken this long for it to surface. Whilst the franchise never quite lived up to early partisan fanboy hype – another purported Halo-killer that fell short – it proved a serviceable and enjoyable shooter, showcasing the grunt of the PlayStation 3 and with three titles managing to slowly polish the formula. They all came from the same developer though – Insomniac Games – and the only portable offshoot, 2009's Retribution, was brought to us by Sony's Bend Studio. With development duties shifted once again, this time to Nihilistic Software, will the blueprint of hectic bullet dodging and alien blasting survive intact?

Story-wise, the year is 1951, you are wholesome all American fireman Tom Riley. Through misfortune you find yourself caught up in the fight against the Chimera (the alien invaders seen throughout the series), as you find your family in need of rescue. It's tied into the game in as much as it links events, you're pointed in a direction and you shoot whatever you meet. There is no character exegesis, no startling revelations or plot twists – if it were any more simplistic you'd swear it was a post-modern swipe at the formulaic nature of videogame plotting; aliens bad, Americans good, now shoot them. The controls are one of the game's biggest successes; mixing touch-screen intuitiveness with standard FPS logic. Sony's consoles have often been criticised for their analogue sticks, the common complaint that they are spongier and lack a certain resistance (no pun intended). This game however proves that the Vita's thumbsticks fit the remit of movement and aiming necessary in an FPS. Fixing on an enemy is a breeze and you can toggle look acceleration off or on. The touch-screen is not a gimmick-fest that corrals you into using the expensive addition, it is instead generally used as it should be, as an extension of the controls allowing you to quickly access further options on the fly.

Tapping the screen for a melee weapon attack is simple, the icon in the perfect place for your right thumb to momentarily slip off the stick. Similarly, running by using the Down button on the D-pad may seem odd when you see the layout, but in practice it's perfect, as you push the left thumbstick forward your thumb should easily come to rest there, and if you can't get on with that you can use the rear touch-pad which quickly proves intuitive.

There are instances though where the new tech on offer to the devs feels a bit off. Tagging enemies when using the Bullseye rifle (which effectively makes your bullets home in on them) is performed by jabbing a digit at their whereabouts on the screen. Thus requiring a hand free and resulting in an obscuring of the screen. For a game that otherwise feels so right in terms of controls, to have to shift a paw in order to take an enemy down is a bit irritating, particularly if you're a devoted FPS fan who just wants to get on with it the good old fashioned way. Likewise, grenades are aimed and thrown by dragging the grenade icon on the right of the screen to where you wish to shortly see Chimera limbs flying. It's fun, but at times it feels less empowering and more a cheapening distraction that is compensating for the inadequacies in the game's flow and the attack patterns.

Cover is an absolute doddle, as soon as you come to the end of an object behind which you can take shelter, an icon will let you know you're butted up against it. You can edge along and peer out with the D-pad or use the L trigger to survey the scene down your sights. You aren't snapped into cover either, leaving the run-and-gun thrills open to dynamic play rather than stuttering. It's just as well, as if there is an Achilles heel to the title it's that of level design. It doesn't help that there are a lack of interesting enemies to face, the same few Chimera – a basic mix of land/air and weak/tough – get in your face over and over again. No matter how you change the order of their arrival, it doesn't challenge you to change tactics or feel suddenly hounded when you know you've killed a host of them and will continue to face even more. The aforementioned attack patterns aren't cunning enough to challenge hardened FPS aficionados, which leaves more of a traditional portable shooter feel to the game, there's enough breathing room to play about without ever feeling genuinely in peril. Have fun throwing grenades, but don't take it too seriously, and as a light and relatively solid shooter it proves pretty engaging.

Sadly it's also a fairly buggy experience. Non playable characters can miss their cues, leaving you stuck to prod about and wait for them to spring back to life. When they do come back they are prone to gesticulate as if there is scripting missing, like you're stuck in some kind of weird playback loop where actions and reactions aren't synced. Luckily these aren't that important, as the story is largely pointless – aliens are shootable, so why do you require any further impetus to shoot them? No amount of 50s Americana will add to your want to try out that new rifle on an interstellar gargoyle. Go here, shoot that; character exegesis not required.

What is more important is the quality of the graphics and their stability. Texture pop-in is a sporadic blight, and following one cut-scene I was wandering aimlessly around an environment with nary a single top-layer texture as far as the eye could see. Cinematics are prime offenders, with objects disappearing and the camera often poking through the floor or walls as your character hits it for a split second. Installing the latest patches are a must.

This doesn't stop the single-player being fun though, if anything it adds to the general quick-blast feel of the game; it isn't particularly taxing, it gives you weapons to play with and enemies to shoot. The levels are like a comfortable slipper for anyone even vaguely familiar with FPSs, repeating the switch from corridors to a more open area throughout the game. It's hard to see the former instances of tight, monotonous straight lines as anything other than filler, even with a few staircases thrown in for good measure. It's only in the wider spaces that Burning Skies feels like a game that has had any real degree of fine-tuning in level design. Boss battles are an old-school inclusion, but it's the moments when multiple enemies attack in waves from different directions that are the most enjoyable. What's less enjoyable is the auto-save feature, whereby you re-enter an area with the amount of ammo you had when you died, hence if you've diminished your supply too much and still snuffed it you're pretty much out of luck. The enemy AI is almost passable, but that extra thumbstick would be wasted if you didn't have a few human opponents to try the new more precise controls out on. Multi-player for up to eight participants (via an online pass) should prove an engrossing experience if the inventive weaponry is anything to go by. I say should, as just like the single-player, the multi-player side of things is full of issues, the biggest being just connecting to a game. Prepare to spend some time checking router settings, seeing if servers have gone down and generally wondering if the high-priced bit of kit in your hand has been rendered about as connected to anything as a tin can with a string poking out the end. When you're in, you can look forward to relatively lag-free Deathmatch, Team Deathmatch and Survival modes, but thus far my experience of that side of the game has been curtailed and infuriating.

So if it's back to the solo mode, well it's all about the guns, and there's a solid variety which can be adapted further with “Grey tech” picked up, enlarging ammo capacity and tweaking secondary functions. It's always going to be fun firing large calibre guns at vaguely humanoid creatures whose heads explode, sadly ultimately that's not enough to draw you back to a campaign that can be completed in six or seven hours. There are collectibles in there, but the level design is essentially single-tracked with a couple of alcoves to peer into, which makes it hard to miss much and adds to the atmosphere of a cut-down portable game.

Resistance: Burning Skies is a prime example of a decent franchise that should have evolved and benefited from new developers coming at it with fresh ideas, but has in fact regressed. Inventive and powerful weaponry to experiment with is the sticking plaster of all poor FPSs, and Nihilstic Software have taken this admittedly fun band-aid and applied it to the troubling wound of a game that simply lacks quality. Patches help the technical issues, but monotonous level design and predictable AI curtails any inkling that you could be let loose in this virtual shooting gallery to play with the arsenal at your disposal. It can still be fun, as is the case with all simplistic shooters, aided by the control scheme which is a joy for a handheld console. Once you've seen the somewhat uninspiring campaign through though, longevity proves a more troubling foe than any Chimera.